With a new series ‘Secrets of the Krays’ now on TV the endless fascination with the terrible twins continues, here played by Simon Cotton (Ronnie) and Kevin Leslie (Reggie) who appropriately won Best Actor at that year’s Marbella Film Festival.

Although it supposedly begins in Hackney in 1951, this movie takes its sartorial and visual lead from David Bailey’s 1965 portrait of the Kray Twins and its technique from A Clockwork Orange rather than The Blue Lamp; while the saturated Edward Hopper colours evoke the swinging sixties rather than the drab Britain of the fifties where the action mostly takes place. Likewise the saturnine young blades depicted here bear little resemblance to the beefy, cold-eyed bruisers of Bailey’s double portrait (while naturally no attempt has been made to cast actors who resemble Alec Douglas-Home or Henry Brooke in the brief scene with the Prime Minister and Home Secretary at Number 10).

Amidst all this testosterone a couple of ladies from Albert Square make all too fleeting appearances in the form of Anita Dobson as a barmaid and Nicola Stapleton as the twins’ mother, Violet. @Richard Chatten

Be Natural: The Untold Story of Alice Guy-Blache (2018) Prime

Pamela B. Green’s fast-moving and fascinating first film chronicles the life of one of cinema’s early pioneers and female filmmakers, Alice Guy-Blaché

Green started her own career as a title sequence director and that very much comes to the fore in this well-crafted and informative documentary that uses a wide variety of visual effects to enliven a collection of old photographs and drawings, including Guy-Blaché’s own film archives (The Cabbage Fairy (1896) is a particular delight), and even interview footage taken just before she died in her early 90s. There are a few too many random talking heads making this often feel bitty. Some don’t have anything to say beyond admitting they had never heard of the French director, but it could well have been condition of funding that each contributor had their ‘say’.

Guy-Blaché (1873-1968) was born in Paris and would go on to make over a 1,000 films, including silents and those with sound (which she pre-recorded), although many of these were attributed to men. Clearly luck played a big part in her success: women in the late 19th century were – on the whole – housewives and mothers. But Guy-Blaché had dogged perseverance along with her talent, working as a secretary for inventor Leon Gaumont – considered a plum job at the time – she was there when the Lumiere Brothers first set their apparatus running on everyday life in their local town of Lyon.

Narrated by Jodie Foster, the film (funded through Kickstarter) charts the early days of cinema from Paris to New Jersey and California before going back to Europe, tracing an art form where women seem to be very involved, much more so than nowadays, possibly because commercialisation hadn’t quite taken hold of the cottage industry: films were still considered the domain of the female chattering classes and kids. Something to keep women amused while men were doing more important things.

But the film’s co-writer Joan Simon and curators and historians such as Kevin Brownlow and Claire Clouzot offer the most salient contribution to the film, outlining the cultural significance of Gay-Blaché’s contribution, including the invention of synchronised sound. Above all, she was a highly inventive pioneer who just happened to be a woman, and whose talent and perseverance is celebrated in this valuable feature debut. MT

French filmmaker Mikhael Hers has found a delightfully lowkey way of depicting tragedy – both personal and collective – in a fresh and surprisingly upbeat drama that won the top prize at Tokyo Film Festival this year. The key here is the naturalistic approach and convincing performances. With a lightness of touch and avoiding sentimentality or melodrama at all costs, Hers and his co-writer Maud Ameline capture the way kids often cope with loss or change better than adults. Skilfully keeping the disaster firmly in the background, they focus on a human story that renews our jaded faith in family relationships.

Vincent Lacoste is one of the reasons Amanda is so enjoyable. He plays a sympathetic and flexible support to his sister Sabine who is struggling to bring up her little daughter Amanda. They all share a bijou apartment in one of those leafy Parisian central squares, David making a living looking after the other apartments in the block and working as a local part-time gardener. Lena (Stacey Martin) soon becomes a neighbour and a light-hearted romance is kindled. When Sabine is caught up in the tragedy, David decides to take full responsibility for little Amanda (an impressive Isaure Multrier). And when Lena moves back to Bordeaux, David realises he misses the female element in his life. A lovely Feelgood film.

Jean Cocteau’s original was a pioneering piece of magic made when he turned his hand to filmmaking during WWII. With very limited resources, the result was enchanting and eerie. Even with a large budget (and filmed in Babelsberg where Metropolis and The Blue Angel were shot) this latest version of BEAUTY AND THE BEAST doesn’t conjure up the same mystique, but is a lavishly-imagined if over-the-top frolic from Christophe Gans that spans both Renaissance and Napoleonic eras. It has Lea Seydoux as a gentle Belle and Vincent Cassel as her fiercely masculine Beau yet elegantly pathetic Beast – essentially an asshole who turns into a nice guy. Andre Dessollier is magnetically impressive as the kindly father. Because all the leads were versed in mime and method acting the piece really benefits from their acting chops and makes the production a success, if you can overlook the overzealous CGI. Narrative-wise Gans has developed Cocteau’s original here, with co-writer Sandra Vo-Anh adhering faithfully to Jeanne-Marie Leprince de Beaumont’s book to explore the origins of the Prince’s curse and its connections with the forces of nature. The result is more a children’s fairytale than Cocteau’s enchanting and subversive outing but there are some dark moments too. You can compare the two now on international platforms. MT. 111min.

Icelandic director Baltazar Kormakur attempts to scale the highest peak but doesn’t quite reach Nirvana here in a thriller based on real events (always a tricky premise when those affected are still alive). Everest wraps a series of lukewarm love stories in the grip of an icy disaster movie, based on an attempt to scale Mount Everest in 1996. For once the 3D format actually brings to life the vertiginous peaks, hellish chasms and lofty mountain scenery of Nepal but somehow the human elements are less impressive.

The action shifts between a group of gung-ho mountaineers bent on proving themselves, leaving their disappointed partners back home trying to grapple with real life. And although Kormakur spends a long time at basecamp building rapport with his characters, none stands out with a personality to make us care if they succeed or fail. Jake Gyllenhaal is billed as the star of this ‘epic’ drama but is cast as a neanderthal nice-guy so cool he ends up frigid, quite literally. Josh Brolin starts out fighting fit but will limp back to his Texan roost where his wife (Robin Wright) is the one really wearing the trousers. Keira Knightley is there with her signature grimace and a bump to keep her grounded, while her on screen partner Jason Clarke gets to lead the expedition (as Rob Hall) in a ridiculously patterned romper suit. In a bizarre twist, there are no heroes but plenty of fall-guys – in the true sense of the word.

Ostensibly, climbing is now a commercial exercise, and there are plenty of organisations in the Himalayas making money out of their punters’ desires and dreams: And we’re talking big money to the tune of $65,000 a pop. Clearly there are risks as well as rewards and the former outweighs the latter. Rob is responsible for ensuring he delivers – not only for the clients but also for his bosses: As Emma Watson’s stolid base-camp administrator Helen (who job is to be the lynchpin) points out: “it’ll be bad if we don’t get any climbers to the summit again this year”.

As an experienced mountaineer, Rob is the consummate professional. Despite his unwise sartorial choices, you feel safe with him but spooked out by his climbing advice: “Human beings aren’t built to function at the cruising altitude of a 747.” The other clients in the group are Doug Hansen (John Hawkes) a part-time postman, and Yasuko (Naoko Mori), the token woman. And to give the expedition glowing press coverage there is well-known journalist Jon Krakauer (Michael Kelly, who also features in Amy Berg’s Prophet’s Prey) who went on to write about the ill-fated expedition.

Jake Gyllenhaal is oddly cast as Scott Fischer, a laid back guru leading a competing team, who ends up drifting off into the snowy outback as an also-ran. A perfect storm is to alter the course of their odyssey with unsurprisingly tragic results that make for some gripping viewing, and Kormakur doesn’t disappoint in icy ground already covered in  Kevin Macdonald’s 2003 documentary Touching The Void. The ascent is always easier than the descent where summits are concerned: the euphoria at reaching the summit leads to slackness in safety procedures and mistakes are inevitable on the way down A fatal flaw in the timing of Rob and Doug’s descent leads to tragedy – but whether this is due to human error or just an Act of God with the ‘mountain making it’s own weather’ is never determined.

Everest is an entertaining watch but its human backstory is as disappointing as that of Kormakur’s previous outing The Deep that loses its way in slushy characterisation so as not to upset the real people affected. Go for the terrific view. MT

NOW ON AMAZON PRIME | TOUCHING THE VOID is on MUBI 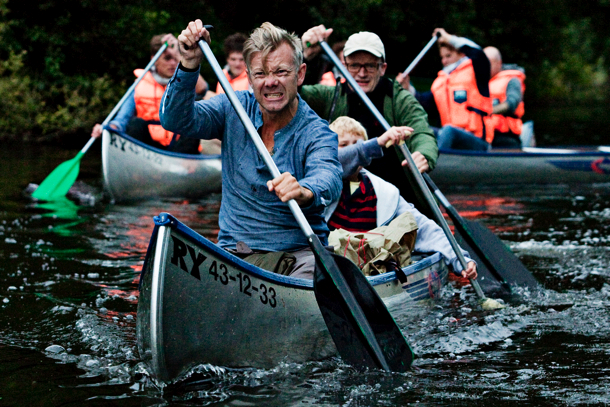 Dont’ listen to the po-faced critics who tell you this is ‘crass, unfunny or outrageous’ – it’s a bit of adult fun, even Peter Bradshaw, the Guardian’s  trusty critic, was seen laughing out loud. You might think this Danish road comedy is going to be dire, then you’ll start to enjoy the ludicrous humour that touches on The Hangover – but much more ridiculous and real:  A trip into strictly grown-up territory – so don’t take the kids – for once they can stay at home! 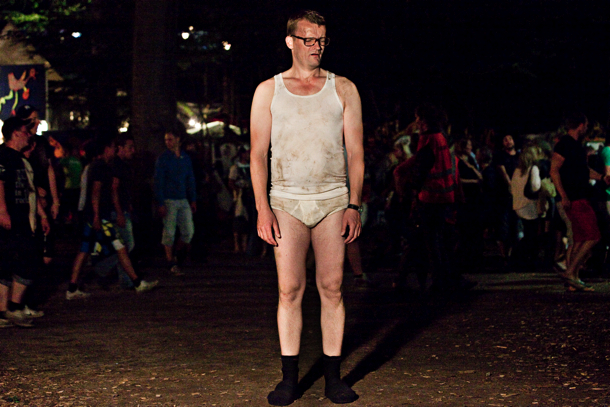 Frank (Frank Hyam) makes a geeky and unfanciable boyfriend for Mia (Mia Lyhne), prancing around in his y-fronts and a baseball cap. But when she discovers she’s pregnant, the time has come to settle down. Before making the final commitment, Frank plans a boys’ weekend of fun with his womanising married friend Caspar (Caspar Christiansen): A spot of canoeing and then canoodling with the local talent at a music festival and, to round off the trip, a visit to a friend’s upmarket brothel located in a fairytale castle.  The only problem is that Frank has been left in charge of Bo, Mia’s 12-year-old nephew.  This may be a chance to prove his fatherhood potential, or it could be a complete disaster.  No prizes for guessing which one it turns out to be.

Apart from the totally inane humour, Klown is imaginatively set in the idyllic Danish summer countryside and there are some gloriously cinematic moments as they navigate the waterways of this beautiful part of Scandinavia. The brothel setting is like something out of Festen – location-wise, promising an evening of upmarket naughtiness and nastiness too. It’s watchable and convincing, written by Hyam and Christiansen: two of Denmark’s most popular stand-up comedians. 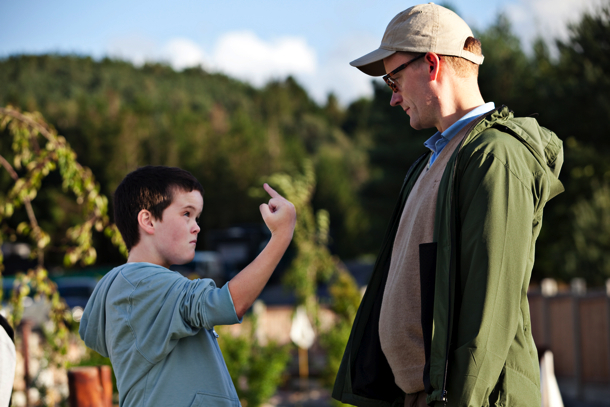 So off they go with one mishap leading to another. There’s not much of a storyline but instead you get a good hour of politically incorrect shenanigans and arch ribaldry on the river. With themes of male-bonding and female-bonding, the only bonding that doesn’t feature is bondage itself but there is a little scene that really hits the spot – you’ll either love it or hate it – but see it before the Hollywood re-make! MT

KLOWN IS OUT on PRIME VIDEO