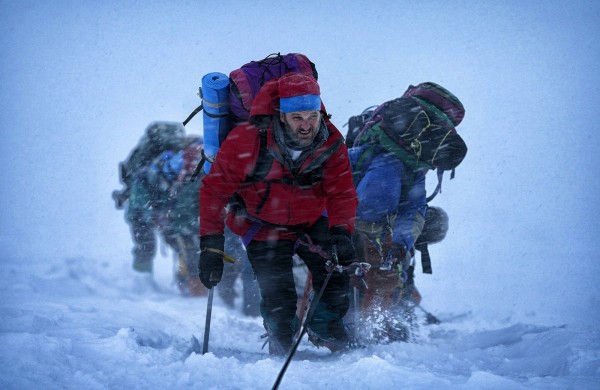 Icelandic director Baltazar Kormakur attempts to scale the highest peak but doesn’t quite reach Nirvana here in a thriller based on real events (always a tricky premise when those affected are still alive). Everest wraps a series of lukewarm love stories in the grip of an icy disaster movie, based on an attempt to scale Mount Everest in 1996. For once the 3D format actually brings to life the vertiginous peaks, hellish chasms and lofty mountain scenery of Nepal but somehow the human elements are less impressive.

The action shifts between a group of gung-ho mountaineers bent on proving themselves, leaving their disappointed partners back home trying to grapple with real life. And although Kormakur spends a long time at basecamp building rapport with his characters, none stands out with a personality to make us care if they succeed or fail. Jake Gyllenhaal is billed as the star of this ‘epic’ drama but is cast as a neanderthal nice-guy so cool he ends up frigid, quite literally. Josh Brolin starts out fighting fit but will limp back to his Texan roost where his wife (Robin Wright) is the one really wearing the trousers. Keira Knightley is there with her signature grimace and a bump to keep her grounded, while her on screen partner Jason Clarke gets to lead the expedition (as Rob Hall) in a ridiculously patterned romper suit. In a bizarre twist, there are no heroes but plenty of fall-guys – in the true sense of the word.

Ostensibly, climbing is now a commercial exercise, and there are plenty of organisations in the Himalayas making money out of their punters’ desires and dreams: And we’re talking big money to the tune of $65,000 a pop. Clearly there are risks as well as rewards and the former outweighs the latter. Rob is responsible for ensuring he delivers – not only for the clients but also for his bosses: As Emma Watson’s stolid base-camp administrator Helen (who job is to be the lynchpin) points out: “it’ll be bad if we don’t get any climbers to the summit again this year”.

As an experienced mountaineer, Rob is the consummate professional. Despite his unwise sartorial choices, you feel safe with him but spooked out by his climbing advice: “Human beings aren’t built to function at the cruising altitude of a 747.” The other clients in the group are Doug Hansen (John Hawkes) a part-time postman, and Yasuko (Naoko Mori), the token woman. And to give the expedition glowing press coverage there is well-known journalist Jon Krakauer (Michael Kelly, who also features in Amy Berg’s Prophet’s Prey) who went on to write about the ill-fated expedition.

Jake Gyllenhaal is oddly cast as Scott Fischer, a laid back guru leading a competing team, who ends up drifting off into the snowy outback as an also-ran. A perfect storm is to alter the course of their odyssey with unsurprisingly tragic results that make for some gripping viewing, and Kormakur doesn’t disappoint in icy ground already covered in  Kevin Macdonald’s 2003 documentary Touching The Void. The ascent is always easier than the descent where summits are concerned: the euphoria at reaching the summit leads to slackness in safety procedures and mistakes are inevitable on the way down A fatal flaw in the timing of Rob and Doug’s descent leads to tragedy – but whether this is due to human error or just an Act of God with the ‘mountain making it’s own weather’ is never determined.

Everest is an entertaining watch but its human backstory is as disappointing as that of Kormakur’s previous outing The Deep that loses its way in slushy characterisation so as not to upset the real people affected. Go for the terrific view. MT

NOW ON AMAZON PRIME | TOUCHING THE VOID is on MUBI