There’s a magical lyrical quality to Songs for a Fox which seems to echo the director’s previous life as a rock musician before becoming a filmmaker with a string of features, winning the special jury prize at Tallinn for You Am I (2006).

Set in the glorious summery meadows and swampy woods of Lithuania Songs follows emotionally vulnerable rock singer Danius who escapes to the bucolic paradise to get over the death of his girlfriend. He may run but can’t hide from the haunting memories of their time together and she appears in woozy dream sequences as he slips in and out of reality, in a script loosely based on the myth of Orpheus and Eurydice, and also inspired by Lithuanian folklore. 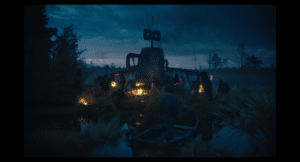 This imaginative visual backcloth is accompanied by a surreal soundscape of newly recorded songs by cult Lithuanian band ‘Šiaurės kryptis’ in a fable about love, longing and the circle of life. MT

Don’t be put off by the rather banal title, this first film from Lithuanian director/co-writer Dovile Sarutyte is a small gem: genre wise, a trauma fuelled road movie that finds dark humour in the banal and the tragic when a young woman is suddenly confronted by the double blow of death and complex funeral arrangements. A time of mourning when we are forced to face the world at the most importune time.

In a Paris hotel we meet Dovile (Misiunatie), a young recording artist in her twenties, celebrating being young and independent with her two girlfriends Egle and Rasa. A day later, at work in her Vilnius studio recording studio in Vilnius, the world implodes with the sudden death of her father. The story continues as past happiness mingles with current anguish – home videos of Dovile’s childhood in the 1990s, and now the aftermath of family tragedy – a clapped-out Mercedes and a neurotic mother (Savicenko).

The two women meet Vladislavas (Lavrinovic) a greedy undertaker capitalising on their grief to sell them the most expensive funeral package. Afterwards, Dovile grapples with the Death Certificate from the hospital morgue, the cause of death was heart failure. Desperate for more detail to help her process her anguish Dovile learns that her father’s liver was severely damaged. The arrangements for the wake are also costly: 500 Euro for a one-day rental. “I could rent a concert hall for that” snaps Dovile and goes to meet Tadas (Jakstas), an old friend of her father, but not before the car breaks down.

Tadas has not seen Dovile’s father for more than six months but proves to be a ‘friend in need’. Father had stopped driving due to an alcohol problem, piling bewilderment onto her shaky state of emotional fragility. Gradually things come together, the Mercedes is repaired and Tadas finds a much cheaper venue for the wake: the boss of the funeral parlour, Zita (Maskarina), is a former flame. Dovile also makes a collage of photos from the family album telling her father’s life story in the wake room, where the urn looks solemn, a life reduced to a pot.

After the funeral, Dovile and her Mum make fun of Zita trying to re kindle her relationship with Tadas. But the laughter turns hollow, when it emerges Dovile’s grandmother somehow missed her lift to the funeral, and she explodes in anger: “You burned my little son”, insisting on a photo of the deceased in an open coffin.

The home videos show a joyful Dovile. But reading between the lines, the truth is quite different. Funny how we often remember the past with rose-tinted spectacles, bringing another strand of false memory to the narrative. At least Dovile and her father bought Christmas presents for each other, and this makes for a mellow ending to the traumatic and frustrating two-day adventure. DoP Eitvydas Doskus has kept up with the pace of the story, the images flying by, but his close-ups of Dovile, who is suffering from a worrying eye infection, are a testament to his skill of creating intimate moments. Dovile Saratyte is certainly a name to be reckoned with – you read it here first! AS

Already winning awards for screenplay and artistic achievement this compulsive crime drama from Russian director/co-writer Aleksey Kozlov takes place in the early 1920s Petrograd where Boris Letush, a law professor at the university, becomes embroiled in a dark underworld of politics and secret police while investigating the death of his brother and sister in law, – his nieceMargo survived, but was struck dumb by the traumatic experience.

Letush (Komarov) is a busy man. Teaching his university students, and actively working for the Police, his boss Matveer (Shcipitsyn) is an unscrupulous and greedy little man, who steals food and sleeps with women who are in thrall to, fully aware he has syphilis. So far the chief murder suspect is a well known felon and gang leader Lyonka Panteleev (Komonets). The police boss is convinced he has his man but Letush suspects Matveer himself of the crime, and his lover, a cabaret singer, is ready to denounce him. But the fly in the ointment is that Panteleev was also working for the police as undercover agent. But the do decide to go ahead with Matveer’s plan to have Panteleev ‘escape’ from prison, being shot “whilst escaping”.

Of course it all goes wrong on the night and Panteleev escapes for real, leaving Letush and Msatveer in the lurch, and attracting the attention of the Cheka (Secret Police) after  Letush’s lover Vera (Sveshinova) falls foul of the law trying to escape to Paris.

Paranoia seethes throughout a city where everyone seems to be untrustworthy, not least the Cheka on the regular Police. Letush, for all his scruples, is caught up in these over-lapping spider-webs of deceit. He may be a goodie with the best of intentions but somehow the climate conspires against him, leaving him no alternative but to participate if he wants to save Vera and Margo.

Throwing shadows all over the place, DoP Viacheslav Tyurin creates a German expressionist underworld of subterfuge and sculduggery where it never seems to get light as the characters struggle to survive the atmosphere of menace. There is no quarter given for mitigation or self doubt, the only way forward is to hunt with the wolves, as Letush will find eventually find out to his chagrin. AS

THE CONSCIENCE is showing as part of the London Russian Film Festival, currently being held for the first time in the UK – from November 12 to December 10, 2021. New customers can enjoy the festival films on BFI PLAYER as part of an extended Subscription free trial using the voucher code RFF21.

A new film explores the pioneering work of Russian actor and director Konstantin Stanislavski (1863-1938) who became synonymous with a performance style based on his ‘Actor’s Manual’ in three parts, published during the 1930s.

The ‘Stanislavski Method’ is the bible of all progressive theatre artists, and still hotly discussed in all the best dressing rooms, even though Stanislavski himself is quoted saying “Create your own method, don’t rely on mine. Keep on breaking traditions”. Stanislavski himself managed to maintain his inner freedom and true artistry within the harsh boundaries of the Soviet system, all thanks to the power of his prodigious talent.

The MHAT (Moscow Arts Theatre, which Stanislavski founded with Vladimir Nemerovich in 1898), seems an appropriate setting for a series of interviews with leading proponents on this method immersive feature documentary directed by Julia Bobkova. We meet Lithuanian director Oskaras Korsunovas who claims sitting in Stanislavski’s chair, rehearsing ‘The Seagul l’, gave him the inspiration for his performance. Marina Brusnikina, also a stage director, talks about the master’s polemic writing “Theatre is Dying”, which was published when he was still alive in the late 1930s. She sees the modern actor as a journalist and explorer, crossing the borderline of regular theatre. She laments the fact that Shakespeare is no longer on the curriculum in London acting schools. The general consensus nowadays is that studying the bard is unlikely to help you a get slot on HBO as a filmmaker.

Katie Mitchell, Artistic Director of the ‘Globe Theatre’ (and stage director of a Virginia Wolfe novel based purely on the reflections of the main character) goes a step further: “Cinema deprives the audience of imagination. It replaces imagination with itself. Theatre happens not so much on the stage, but in the imagination of the audience”. Russian film and stage director Nikita Mikalkov (Burnt by the Sun) talks about his adaption of Stanislavski’s approach to rehearsals: “During rehearsals, with five or more cameras active, I ask one of the actors to do something which is not in the script, like putting a cup of tea forcefully on the table where the rest of the cast is sitting. Their reaction is priceless and gives me ideas.”

An exhibition at the MHAT shows stills and other memorabilia of all “Seagull” productions the theatre has ever staged, from Stanislavski’s (it did not open the theatre as commonly reported) to the most recent, directed by Oskaras Korsunovas.

Stanislavski’s tour of the USA from 1922-24 was a great success, and “was the best thing that could have happened to Hollywood. Many Russian directors and actors left the hunger they faced in Stalinist Russia, and emigrated to the New World”. Meryl Streep and Helen Mirren are seen heaping praise on the Russian innovator. Renata Litvinova, who teaches at the ‘Actor’s Studio’ is adamant, that “Genius is 95% work. You have to throw yourself away every day.” And Ivana Chubbuck, who has taught countless Oscar and Emmy winners, underlines Litvinova’s sentiments: “It is not just one day, where you have to give everything, it is your life”. There are some pessimistic thoughts raised at the MHAT events: “Now the office dictates to actors and directors. But it should be the other way round. People become more and more irrelevant, as we head to a virtual life. It’s a kind of de-personalisation, with a lack of direct, intimate connections. Today everything is becoming a sort of a product measured in currency.”

At the end of the film, the actors and directors are given some writing by Stanislavski to read out in front of the camera. Declan Donellan, Artistic Director of ‘Cheek by Jowl’, is annoyed when he reads the Master’s advice not to copy him, and goes spontaneously on strike.

Bobkova keeps talking heads to a minimum, thus avoiding hagiography, instead her more radical approach focuses on the lively camera crew of six and entertaining archive clips of the master, bringing the past and the present together, and keeping Stanislavski’s independent spirit alive. AS

If you’re in the UK you can discover the best in contemporary Russian cinema as part of an extended free trial to BFI Player Subscription – simply sign up here using voucher code RFF21 to claim an additional free month.