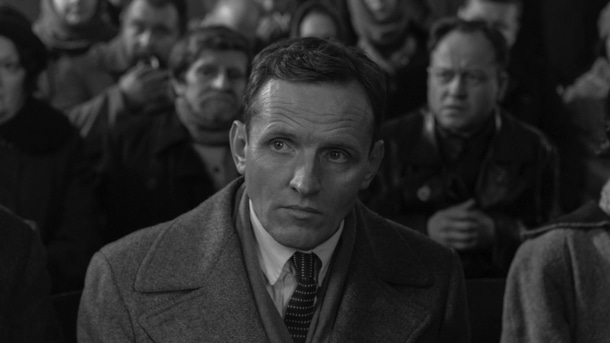 Already winning awards for screenplay and artistic achievement this compulsive crime drama from Russian director/co-writer Aleksey Kozlov takes place in the early 1920s Petrograd where Boris Letush, a law professor at the university, becomes embroiled in a dark underworld of politics and secret police while investigating the death of his brother and sister in law, – his nieceMargo survived, but was struck dumb by the traumatic experience.

Letush (Komarov) is a busy man. Teaching his university students, and actively working for the Police, his boss Matveer (Shcipitsyn) is an unscrupulous and greedy little man, who steals food and sleeps with women who are in thrall to, fully aware he has syphilis. So far the chief murder suspect is a well known felon and gang leader Lyonka Panteleev (Komonets). The police boss is convinced he has his man but Letush suspects Matveer himself of the crime, and his lover, a cabaret singer, is ready to denounce him. But the fly in the ointment is that Panteleev was also working for the police as undercover agent. But the do decide to go ahead with Matveer’s plan to have Panteleev ‘escape’ from prison, being shot “whilst escaping”.

Of course it all goes wrong on the night and Panteleev escapes for real, leaving Letush and Msatveer in the lurch, and attracting the attention of the Cheka (Secret Police) after  Letush’s lover Vera (Sveshinova) falls foul of the law trying to escape to Paris.

Paranoia seethes throughout a city where everyone seems to be untrustworthy, not least the Cheka on the regular Police. Letush, for all his scruples, is caught up in these over-lapping spider-webs of deceit. He may be a goodie with the best of intentions but somehow the climate conspires against him, leaving him no alternative but to participate if he wants to save Vera and Margo.

Throwing shadows all over the place, DoP Viacheslav Tyurin creates a German expressionist underworld of subterfuge and sculduggery where it never seems to get light as the characters struggle to survive the atmosphere of menace. There is no quarter given for mitigation or self doubt, the only way forward is to hunt with the wolves, as Letush will find eventually find out to his chagrin. AS

THE CONSCIENCE is showing as part of the London Russian Film Festival, currently being held for the first time in the UK – from November 12 to December 10, 2021. New customers can enjoy the festival films on BFI PLAYER as part of an extended Subscription free trial using the voucher code RFF21.