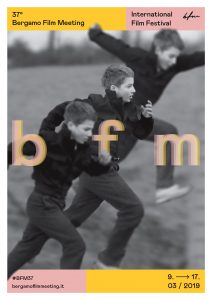 Bergamo Film Meeting unveils its 37th edition from March 9 – 17, 2019 in the mountain side venue just north of Milan in the Italian Dolomites. Bergamasco is one of Italy’s most intriguing dialects and the town boasts a wealth of gourmet restaurants and bars where you can savour saffron-flavoured risottos and a legendary pancetta laced pasta dish called casonelli alla bergamasca in a rich butter sauce accompanied by the local wines, including the famous red Moscato di Scanzo. Local handmade ice creams are based on regional ingredients, with stracciatella a speciality.

To open this year’s festival there will be a live performance of Fritz Lang’s  METROPOLIS on Friday 8th March, 20.30, Ex Chiesa di Sant’Agostino – P.le Sant’Agostino, Bergamo.

During the nine screening days and more than 180 films among feature films including world premieres, docs and short-films

The complete works of two filmmakers who, in the last few years, have portrayed Europe’s varied  aspects through a uniquely personal vision: the Norwegian BENT HAMER (10001 Grams) and the Spanish director ALBERTO RODRÍGUEZ (Marshland) along with his collaborator RAFAEL COBOS, will be guests of the Festival from March 13 to 16.

Also joining the celebration will be Macedonian director and cinematographer Karpo Godino as part of THE YUGOSLAVIAN BLACK WAVE: Retro of his work.

Claire Denis’ talents extend across the genres – her terrific comedy debut Un Beau Soleil Intérieur starring Juliette Binoche, Gérard Depardieu and Valéria Bruni-Tedeschi sees a trio of Parisians keen to find love the second, third (or possibly even) twentieth time around. Previously known as Des Lunettes Noires, a more edgy and intriguing title that conveys the romantic pleasures of the time discretely known as ‘un certain age’, this drôle and triumphantly upbeat satire will make you chuckle knowingly, rather than laugh out loud.

Binoche plays Isabelle, a recently divorced mother in her early fifties keen to rediscover the buzz of sex and lasting love again and all the other things that make ‘la vie du couple’ worth living, after the pressures of raising a family or struggling to build a life. Surrounded by a series of smucks – to put it politely – she feels that romance is already a thing of the past. Isabelle is ‘special’ in that mercurial way that becomes amusingly familiar as Denis’ insightfully intelligent narrative unfolds. She has reached a time when wisdom and experience enriches everyday life, but when it comes to love we are still often teenagers.

Isabelle welcomes the familiar routines of daily life, but so do the men she encounters, particularly one pompous banker (Xavier Beauvois) who is the ultimate control freak and useless in bed. But she falls in love all the same, due to her newfound ability to tolerate even the worst of what’s left men-wise. The banker is clearly unable to leave his wife, so Isabelle moves on to Sylvain (Paul Blain), a louche and sensual man she meets in a bar where they dance to they strains of “At Last’  – and of course you know this is just another dream. Then there is alcoholic actor (Nicolas Duvauchelle) who satisfies her sexually but is too fond of himself to far for anybody else. Isabelle is looking for chemistry but also someone from her ‘milieu’, but at this stage in the game most  available men are single for a reason: they are either geeks or deeply unattractive, but totally unaware of it. And ex-husband François (Laurent Grevill) still serves as a ‘friend with benefits’, occasionally popping back on the scene, although her daughter is only glimpsed briefly.

Apart from the acutely observed witty script, the emotional nuances of Binoche’s performances are what makes this so enjoyable. Un Beau Soleil never takes itself too seriously, and is a complete departure from her dramas such as Beau Travail and White Material, and is probably most like her 2002 outing Friday Night. And the final scene where she visits Gerard Depardieu’s psychic is such a perceptive interplay between clever dialogue and intuitive performances it’s a joy to behold. MT

AMOUR FOU opens in 1811, in with a painterly image of a Berlin intellectual household listening to Mozart’s “Das Veilchen”, performed by a professional singer. This is a typical setting for the classic “Hausmusik” (musical salon) chez Friedrich (Grossmann) and Henrietta (Schnoeink) Vogel and their twelve-year old daughter Pauline. Significantly, one of their guests is the poet and playwright Heinrich von Kleist (Friedel). The latter is in love with death and has already asked his cousin Marie (Hueller) to ‘die with him’ as a expression of their mutual feelings; Hausner implying that she is not the first to be asked this question. Henrietta, who appears a contented and modest mother and wife, is next in line, and she vehemently denies any interest in a suicide pact. Later on, she falls ill; what seems to be at first just a psychosomatic symptom, turns out be terminal cancer, and von Kleist seems to have found a companion to die with at last. But the couple’s first try falls due von Kleist’s boorish and petty behaviour, before the poet makes a second attempt to inveigle Henrietta at the “Kleine Wannsee” into to his pathetic scheme, near Potsdam on November 11th 1811.

Hausner portrays von Kleist not very sympathetically: he comes over as egocentric and not at all romantic or even physically appealing. After Henrietta’s illness is diagnosed, von Kleist rejects her wish for a suicide pact and tries his luck again with the much more upper class Marie, who rejects him again as she is now betrothed to a Frenchman. Left with no alternative, Heinrich returns, apologetic, to Henrietta. Friedrich Vogel seems to be a much better person, really in love with his wife, even though he treats her (as was common at the time) like an infant daughter. The most unpleasant person in the Vogel household is certainly Henrietta’s mother, a bitter and resentful person, who seems to dislike everyone.

Hausner (Lourdes) succeeds not only in revealing Heinrich as a manipulator, she also indirectly answers a question many asked after WWII: how could such a culture-loving nation like Germany commit so many crimes against humanity. The answer can be found in AMOUR FOU, and in historical figures like von Kleist himself. Right after listening to Mozart, the discussion at the table turns to the new Prussian tax laws which, according to Friedrich Vogel, a government official, will set the peasants free as with taxation comes more freedom. The undemocratic argument at the middle class table was “one cannot give the lower classes the freedom to do what they wish, since they are not capable of making decisions”.

Whilst cultural appreciation went hand in hand with reactionary arguments at this level of society, on a higher level, the togetherness of culture and aggression led to continuous wars: Frederick the Great, who played many instruments, among them the flute to a semi-professional level, led the most bloody wars of his period, including the Seven-Year war (1756-1763). He was not by chance the idol of Adolf Hitler. And one should not forget that Heinrich von Kleist himself spend the years between 1792 and 1799 in the Prussian army, seeing action in the “Rhine” campaign and leaving with the rank of a lieutenant. Hausner shows clearly, that all characters in her narrative have an emotional deficit, and that von Kleist’s false romanticism is really a death wish, accompanied by the need to murder somebody else in the process. There is a direct line from von Kleist’s Wagnerian dream of destruction and self-destruction, to Ucicky’s U-boot film Morgenrot (premiered not accidently on the 2.2.1933) and his hero declaring: “We Germans might not know how to live but we certainly know how to die”.

Hausner sets AMOUR FOU in expertly-framed and sumptuously-lit tableaux, showing distance and analytical endeavour and giving us a formal yet exquisitely pleasurable impression of looking at pictures in an exhibition. Schnoeink’s Henrietta is vulnerable, but still caring. All the men, including the doctor who treats her, suffer from a total lack of empathy; Friedel’s von Kleist leading the field. The set design and general aesthetic underline the lack of any sensual enjoyment in life: the bedroom of the Vogel’s looking like a luxury prison cell. AMOUR FOU is a brilliant portrait of a society unable to be in touch with emotions or any kind of sensuality. The relationship between von Kleist and Henrietta is symbolic: there is no passion or love, just a quiet resignation and a desire for death.