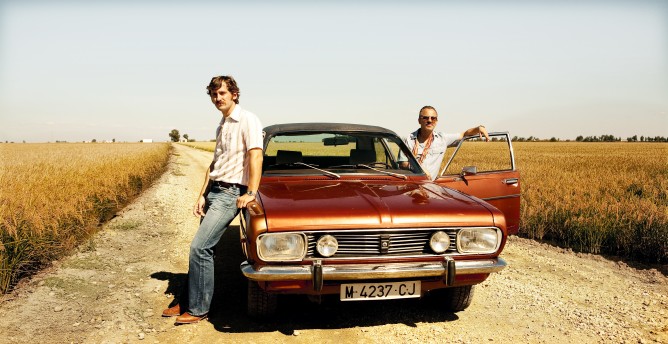 Alberto Rodriguez’s Noir thriller is a stylish affair steeped in the traditions of its remote Andalucian location of hostile wetlands that provides a fitting background to the social confusion and mistrust permeating this post-Franco Spain on the cusp of democracy. Captivating aerial images of the sinuous wetlands provide an unsettling tone to a tale whose murky plotlines wade around in the marshes from where they emerged with a predicably macho stance. But dynamite performances and atmospheric cinematography makes this an intriguing ride even though the ending leaves some questions unanswered.

When teenage sisters, Estrella and Carmen, disappear mysteriously in Villafranco de Guadalquivir, the arrival of two experienced detectives is greeted with savage mistrust rather than relief in a community where everyone seems at loggerheads. Pedro (Raul Arevalo) and Juan (Javier Gutierrez) surface during the ‘feria’, but parents, Rocio and Rodrigo, are not celebrating and their marriage is clearly under strain. The cops two have their differences too – Pedro is young and hungry for justice to be served while Juan is hardbitten and prone to violent outbursts. The new case could be linked to some other unsolved crimes in the area and evidence of blackmail – a burned negative showing porno images of the girls found in their bedroom – is handed over to the cops by their downtrodden mother, Rocio (Nerea Barros). Later, the girls bodies are found, strangely mutilated, in a ditch.

A sexy local seducer Quini (Jesus Castro, “El Nino”) with a predilection for teenagers, seems to be linked to the case and he is seen picking up his latest fling on a motorbike but when tested, his DNA fails to match that found on Carmen and Estrella and soon an older girl, Marina (Ana Tomeno), seems suspiciously involved.

MARSHLAND is a deeply unsettling film that works brilliantly as a mood piece: its breathtaking images, rich textural quality and brooding ambience almost hijack the film’s narrative with its broadly-written characterisation and predictable reliance on macho violence towards its entirely submissive female protagonists. Everything and everyone seems to garner suspicion: the classic sleazy hack (Manolo Solo); the playboy Quini, the strict father (a superb Antonio de la Torre), the local factory boss; even a strange psychic fisherwoman with more red herrings in her basket than grey mullet: all are reek of suspicion but none are particularly engaging. A drug-smuggling subplot also gurgles beneath the surface, but never really takes hold. The gripping finale and its dazzling car chase is almost an anticlimax that still leaves us guessing.

The Andalusians are a proud and serious bunch who rarely smile easily, and nowhere less than in MARSHLAND. Pedro and Juan glower menacingly at each other and everyone else, and you come away feeling little empathy or interest in either of them, which makes MARSHLAND a difficult film to love, despite its fabulous sense of place and luscious look of Alex Catalan’s expert lensing. The troubled Franco years are deeply embedded in this staunch and unyielding territory, baked by the sun and drenched by the elements: even at the end MARSHLAND feels impenetrable. MT