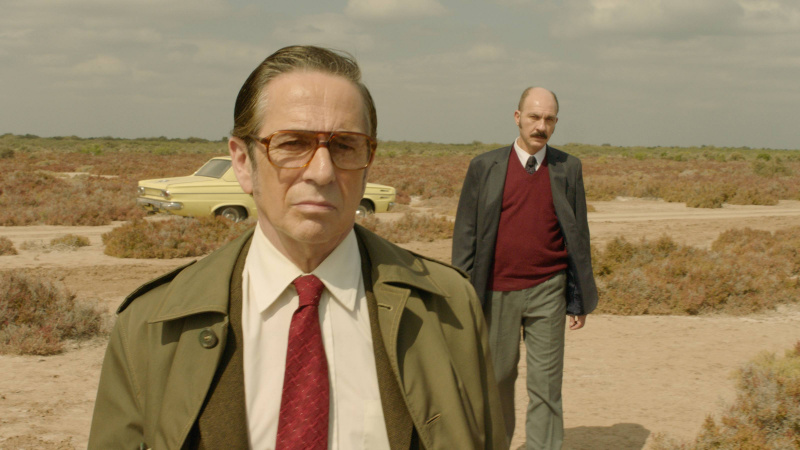 Benjamin Naishtat captures the existential angst of Argentina’s Dirty Wars era in a sinuous thriller that chews over some weighty social themes and distils them into this subtle smalltown crime drama.

ROJO follows his previous moody titles History of Fear (2014) and The Movement (2015). His fascination is exploring the psychological effects of instability: what happens to ordinary people and their relationships during political turmoil? The pre-title scene sees a series of people gradually emerging from a house bearing armfuls of valuables and pieces of furniture. Meanwhile, it’s Saturday night in Rio Seco, a town about 500 miles North of Buenos Aires. Local lawyer Claudio (a quietly- assured Dario Grandinetti) is waiting for his wife (Andrea Frigerio) in a busy local restaurant when an impatient single diner (Diego Cremonesi) demands he vacate the table. The situation soon escalates into a frosty contretemps but Claudio refuses to rise to the bait, calmly returning to the bar where he delivers an articulate verbal put down. But it doesn’t end there. After they leave the restaurant the man pursues them with bizarre consequences, and the story flips to three months later. This tight-knit middle class community is gradually exposed as one of astonishing volatility, a moral morass of intrigue and sculduggery: a brilliant metaphor for the state of the country in general during the country’s Dirty Wars of the mid 1970s. Chunks of land are being bought somewhat illegally, law-abiding locals are becoming minor crooks, and people are disappearing without reason – with no questions asked – as a pervasive paranoia creeps like wildfire through the unsettled community. ROJO lurks in a murky Seventies aesthetic, Naishtat creating a climate of menacing fear with a screeching score of strings (from Vincent van Warmerdam) and some cleverly crafted slo-mo sequences that suggest  docudrama. Uncertainty and danger loom at every corner in a clammy climate of fear and mistrust.

In the final hour, Alfredo Castro’s seedy detective Sinclair insinuates himself into the scenario investigating the murder of the man in the restaurant “el hippie” who, it emerges, is also related to one of Claudio’s close friends Mabel. Channelling Colombo with his stealthy exits and sudden reappearances for “one more thing”, Sinclair sets the lawyer’s nerves on edge in an uncanny set-to that is alarming and totally unexpected. It’s a superbly sinister performance from Castro who sets the cat amongst the pigeons – without any justification, Claudio feels culpable yet has nowhere to go. As the various subplots intertwine the story hints at wider implications for the nation as a whole and Naishtat keeps the tension tightly wound in this unnerving and intriguing thriller. MT.