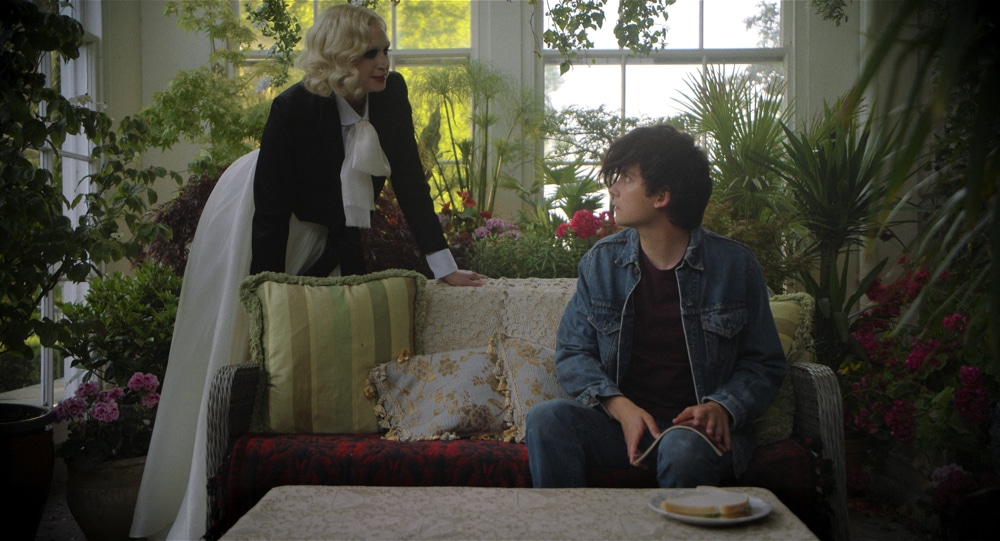 Blending elements from his previous offerings Peter Strickland concocts a mind-boggling soup of style over content. You will either relish Flux Gourmet – or retch into your popcorn.

The soundtrack has echoes of Berberian Sound Studio, but the look is distinctly In Fabric in style with its garishly macabre 19th mitteleuropaïschen overtones. There is the same teasing quality of The Duke of Burgundy but the narrative is precarious and difficult to pin down. The humour – if you can call it that – is deadpan and lavatorial rather than witty or amusing. The performances are generally engaging, Strickland working with his core team of Gwendoline Christie and Fatma Mohamed Asa Butterrfield, Ariane Labed and Makis Papadimitriou boosting an eclectic cast.

This is Strickland’s most self-indulgent and unrelatable film to date. Some may find it laborious – I certainly did. There is a feeling the auteurish filmmaker just wants to mock his audience with a piss-taking pot-pourri of outlandish ideas that somehow fail to make sense, let alone entertain.

In an old English country house, Christie’s Jan Stevens runs residential courses in “sonic cooking” that boil down to a series of creative experimental events taking place with a live audience egging the team on. Participants are selected for their inspired ideas in preparing food, and invited to present their efforts during a series of workshops that culminate in a showcase showdown on the final evening. The sound element is provided by microphones placed strategically into the food that sometimes consists of whipped up terapins or pigs’ ears, and ultimately of those taking part, with ghastly results.

To add to the film’s bizarre nature, there is part-narration in Greek by flatulent commentator Stones (Makis Papadimitriou) who has the job of interviewing the attendees for an in-house journal. Stones is forced to share a dormitory with the rest of the team: tousle-haired Billy (Butterfield), the chain-smoking Lamina (Labed) and Elle (Mohamed). During the small hours, Stones makes frequent trips to the ensuite bathroom to fart ferociously and empty his bowels, and this malaise forces him to seek medical advice from Dr Glock (Bremmer) who takes delight in prolonging his agony with a battery of invasive tests, some of them staged for the live audience.