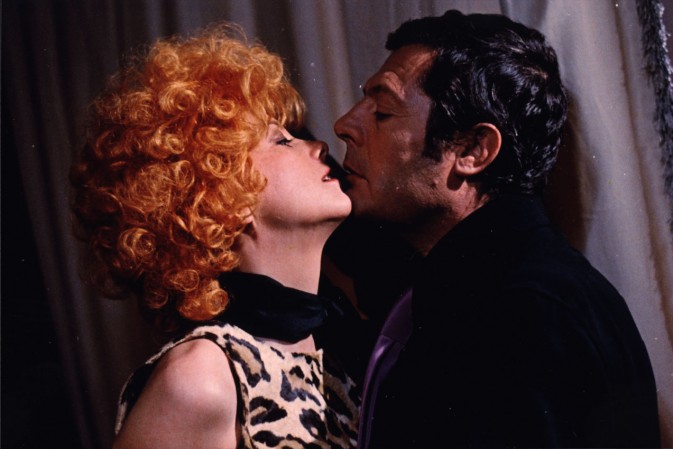 One of the legendary European dramas of the era and the highest grossing, La Grande Bouffe redolent of seventies France with its mock ‘Louis Quinze’ interiors, florid cinematography and original score by Philippe Sarde (The Tenant).  Mocking, cynical and drole in tone, it pokes fun at inappropriate sex, bestiality, marital strife, body functions and the more grotesque elements of everyday life, which are treated with a general nonchalance all round. Uniting the era’s famous acting talents: Michel Piccoli, Marcello Mastroianni, Philippe Noiret and Ugo Tognazzi give rather restrained performances as a group of friends (magistrate, chef, tv producer and pilot) who attempt to escape their woes by eating themselves to death in a French Maison Particulière with a trio of kindly callgirls, while salacious silent movies form background texture to their gargantuan feasts.

As the Cannes festival opener of 1973, the film was naturally going to divide critics, some who regarded it as a worthy enditement of mass consumerism and over-indulgence of the French and Italian middle-classeses (for whom it was quite normal to have a mistress); others as an amusing curio focussing on debauchery of one kind or another. Nevertheless, it went on to win the FIPRESCI prize that year.

According to sources, the film was originally shown unlicensed at the Curzon Mayfair London causing an outcry from infamous campaigner Mary Whitehouse on the grounds of indecency in a public place. This only added grist to the censor’s mill, who went on to rule that films with “artistic merit”  would be exempt from prosecution. Seemingly taking a cue from this experience, Ferreri went on to make Tales of Ordinary Madness, another drama focusing on excess and sexual depravity starring an equally impressive cast of Ben Gazzara and Ornella Muti. It won the FIPRESCI prize at San Sebastian 1981.