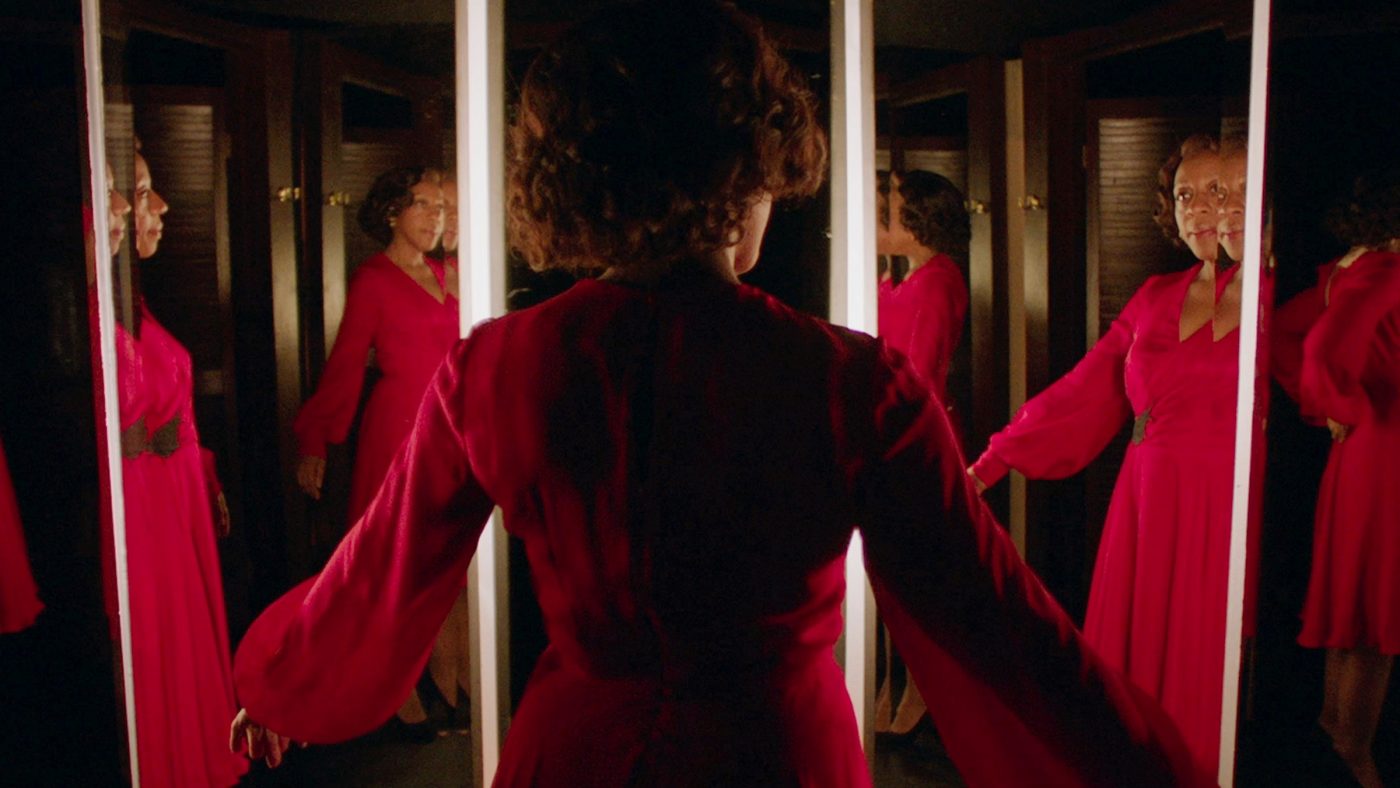 Peter Strickland follow-up to his lesbian frolic The Duke of Burgundy is a sinister 1970s sartorial satire which gets sillier the more it wears on. This fourth bizarre entry is another of those richly entertaining and quirkily fascinating films we’ve come to expect from the British director, now at the top of his game.

A dress is the antiheroine of IN FABRIC. Vampishly voluptuous in scarlet silk and satin, it is a garment to die for, and that is both a blessing and a curse for those who slip it on. For the dress in question possesses strange qualities that no-one can vanquish, because no-one is clever enough to interpret its power. This dense but simply plotted Giallo-inspired erotic thriller conjures up dread, horror and even disgust through its inventive visual aesthetic, and a signature atmospheric soundtrack that recalls Berberian Sound Studio and channels the bizarre human obsessions of sales shopping and stag nights.

It all starts in Dentley & Soper’s fashion emporium back in the day where the January sales were a post Christmas bonanza. In a choppy collage of archive photos of garish retro ad campaigns, Strickland quickly establishes the furore of price slashes and the adrenaline rush of queue barging – the public baying for bargains in anticipation of the fray, long before couch-based internet shopping saw daily discounts.

Marianne Jean-Baptiste plays 50 year old Sheila who’s back on the dating scene, through the small ads – fraught with weirdos, even back then. Sheila is sick and tired of her teenage son’s in-house love-ins with Gwendoline Christie’s woman twice his age, so under the spiky guidance of a crinoline sporting sales woman (Fatma Mohamed speaking in Romanian-accented riddles) she is tempted and then urged to buy ‘the dress’.

The sad hope that a mere garment will satisfy in our human need to be loved and unique (and if not, recycled to the next person) is echoed in the film’s themes of obsession, superficiality and consumerism. Sidse Babett Knudsen, the submissive lover in The Duke of Burgundy, is revealed as the dress’s original owner, who modelling the garment in the shop’s catalogue, under the lofty spiel: “ambassadorial function dress, canapé conversation” – a promise that aspires more to James Bond rather than the Thames Valley. But by the time the victims begin to realise that the dress is damned, it’s already too late. And as much as we aspire to creating a good impression, we’re also guilty of judging a book by its cover. Meanwhile Peter Strickland will be saying at the Q&A: “the film means nothing, I was just having a bit of fun”. MT