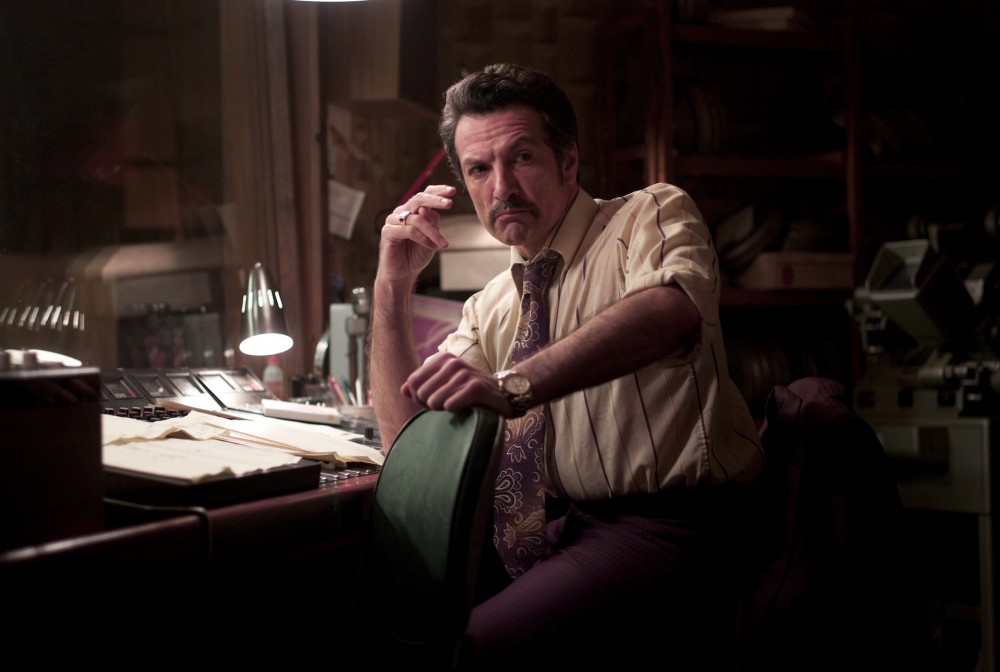 It’s 1976, and in a sleazy sound editing studio somewhere in Rome two monstruous egos are working on “The Equestrian Vortex” a cheap and nasty horror flick based on the “Gialli” paperback thrillers of the era. Francesco (Cosimo Fusco) is the mercurial producer and Santini (Antonio Mancino) the womanising director. Frothing with self-importance and seventies machismo, they are arrogant and faintly ridiculous. Then into the mix slips Gilderoy (Toby Jones) a timid English techie all the way from Dorking. Still living with his mother he is remarkable only for his well-honed skills at mixing and manipulating sound on analogue equipment. His unique ability at producing sounds with a variety of fruit and veg that mimic flesh and bone being crushed and severed by unknown forces and supernatural powers is matched only by his meagre financial demands to get the job done.  But no one is being paid for this gig and Gilderoy’s blokish modesty is at odds with the Italians’ smouldering sexuality.  Their snide banter, jibes and bare-faced chauvinism towards the women “screamers” in the studio creates a palpable ambiance of provocation and some minxy female characters with Bond girl Tonia Sotiropoulou standing out as the sultry and recalcitrant PA.

Gilderoy steadily works his magic on the sound effects but the toxic brew of personalities and claustrophobic interiors start to have a negative impact as he longs for soft memories of home. Losing his grasp on reality, Gilderoy sinks into a morass of auto-suggested horror echoing that of Roman Polanski’s character in “The Tenant”, strangely of the same year. There’s a a lot of early Polanski here: the lighting and sinister shadows, the misery of tortured souls and anxiousness of the outsider. It’s a subtle and finely-tuned performance from Toby Jones and Cosimo Fusco strikes just the right balance between absurdity and condescension. Peter Strickland is a director first feature Katalin Varga won a Silver Bear at Berlin in 2009, his latest, a comedy entitled Flux Gourmet, was back in this year’s Berlinale Encounters strand, but came home empty-handed. MT©