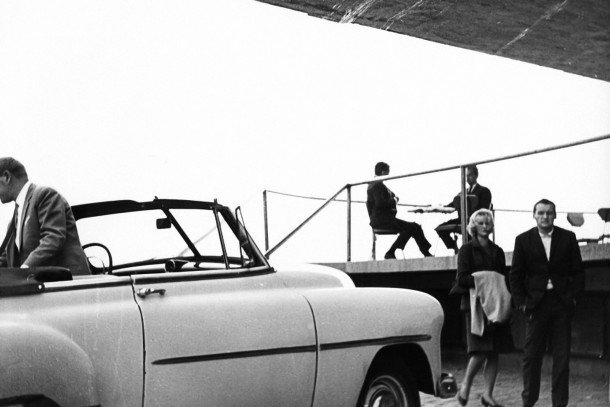 During the 1960s writer and director Jerzy Skolimowski focused on films exploring the ironic aspects and moral dilemmas affecting everyday life in post-Stalinist Poland. His films were the ‘Impressionists’ of an era dominated by the sweeping epics of the Polish Film School.

A debut feature, Rysopsis (Identification Marks: None) 1965 was closely followed by WALKOVER another drama set in his home town of Lodz (and also starring his off-screen partner Elzbieta Czyzewska in the opening scenes).

As Andrzej Leszczy, he represents a ‘New Wave’ hero, a raffish outsider with a certain appeal to the opposite sex. Drifting around the locale, having left the army and about to embark on engineering studies, he is taking part in a local boxing match when he meets Teresa (Aleksandra Zawieruszanka), a government engineer who has arrived in the city to work on a new factory scheme. Under Teresa’s spell (Zawieruszanka looks like a Polish equivalent of Angie Dickinson) goes to the wrong ring for the tournament. And as he sits on the train with Teresa, we see his boxing opponent following on a motorbike, viewed in a superb continuous shot from the rear of the carriage. Turning up later, Andrzej wins the contest in a “walkover” as his rival fails to turn up.

As a metaphor for individuality WALKOVER was a very personal second feature for Skolimowski, who aside from his filmmaking activities enjoyed boxing and poetry, some of which is recited in voiceover in several scenes. The film opens with the face of a woman who will later jump under Andrzej and Teresa’s train, but rather than develop this plotline, Skolimowski’s film segues unconventionally into Andrzej’s story using the furore from the accident as an enticing background introduction to the central story about the couple’s brief romance.

The tragedy of the girl under the train adds additional texture, but remains an undeveloped strand. Perhaps his intention was to use her suicide as a cry for help from the thousands of Poles who felt washed up, directionless and cynical after years of fighting a cause; rather like the troubled characters in Tadeusz Konwicki’s Last Day of Summer. It was certainly his intention to explore unconventional ways of telling a story.

Skolimowski’s drama also seems to suggest the importance of standing up against the tide of change and power.  Both Andrzej and Teresa go on to fight their individual battles in WALKOVER. Andrzej perseveres with his boxing and Teresa argues with the factory chief but they both rebel against the tide of industrial Lodz. Although the couple enjoy a night together they remain detached in the scheme of things, alienated further by the stark industrial landscape of Sixties Lodz.