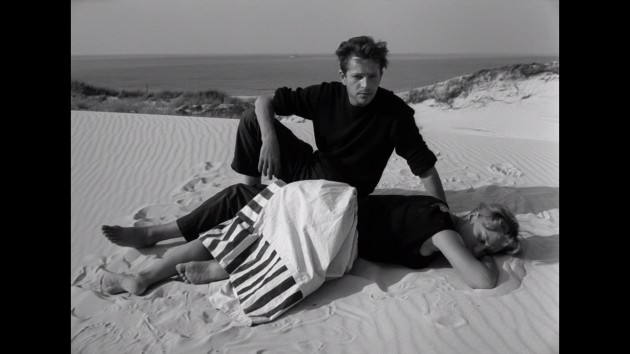 Tadeuz Konwicki’s hints at melodrama and impending doom in this elegantly-crafted mood piece set on a vast deserted Baltic Beach in amongst windswept dunes. As fighter planes pass overhead on a training sortie, two strangers meet tentatively, an older woman (Irena Laskowska) and a young man (Jan Machulski), each seemingly traumatised by memories of the past, unsure of each other and guarded in their attempts to reach out. The woman gradually warms to the man’s advances and they start to communicate with gestures and brief exchanges. Jan Laskowski’s sublime visuals conjure up a mood of sombre anxiety, perfectly capturing the feeling of reticent hope and restless energy in these troubled souls. There is an idyllic scene where the couple embrace in the rolling tide that echoes From Here to Eternity. LAST DAY OF SUMMER is perhaps a metaphor for the re-birth of the Polish nation in the aftermath of War; edging gradually towards the hope of renewal after a traumatised past. It won the Grand Prix at Venice in 1958. MT