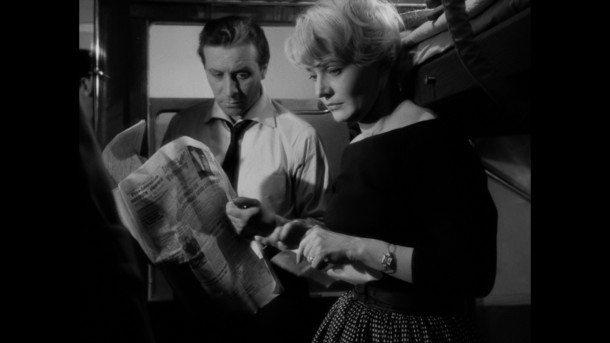 Stylish and endlessly compelling, Jerzy Kawalerowicz’s NIGHT TRAIN (1959), is an accomplished psychological thriller set on a train carrying a variety of passengers from Warsaw to the Baltic coast.

Belonging to the Polish School, that flourished briefly during the fifties, a seductive Noir ‘whodunnit’ was written and directed by the renowned Jerzy Kawalerowicz, and features a seductive a subtle performance for Leon Niemczyk, in suave shades and slick-back hair, travelling to Gdansk. Having lost his ticket, he offers to buy a double cabin for sole occupation but discovers that his berth is already occupied by the foxy Marta (Lucyna Winnicka) who refuses to leave. They agree to share the carriage but their guarded behaviour sets the tone for this sinister and unsettling journey into the night.

At a brief stop-off, Jerzy buys cigarettes and is pursued by a mysterious woman, whilst Marta bumps into a troublesome ex-lover Staszek (Zbigniew Cybulski). It soon emerges that a murderer is on lose and may even be on the train, and it may even be the suspicious Jerzy. With incredibly skilful storytelling, Kawalerowicz keeps the tension taut throughout, heightened by the claustrophobia of the carriage, revealing very little about these beautiful strangers, making us do all the work, pointing the finger at Jerzy, adhering to the maxim ‘speech is silver, but silence is golden. Marta is clearly suffering from emotional strain due to the presence of Staszek. But there is no chemistry between Marta and Jerzy, despite his sultry allure. The couple remain strangers to the others passengers and to each other, eventually becoming complicit in their own status as outsiders against a World poised to indict them without evidence or proof.

Train journeys, particularly at night, conjure up the exhilaration n of the unknown, the excitement of travel, the possibility of danger, the mystery of exotic strangers and NIGHT TRAIN revels in all these elements with its smouldering jazz score by the Andrzej Trzaskowski (Innocent Sorcerers) adding to the atmosphere. Very much a triumph of less is more NIGHT TRAIN borrows from Hitchcock’s North by Northwest, with its undercurrents of danger, it is a metaphor for xenophobia in a society suspicious of anything unknown or unusual, of a Poland fleeing from the cosh of Communism and Socialist Realism. MT