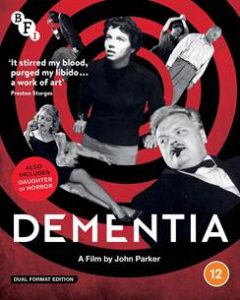 A woman’s paranoia proves to be more than just a nightmare, in John Parker’s influential 1953 horror film Dementia.

Made on a shoestring and certainly none the worse for it, the film shows how much can be achieved with a slim budget.

Attracting a great deal of controversy surrounding censorship, Dementia had a doomed start in life: it fell foul of the New York State Film Board in 1953, who deemed it “inhuman, indecent, and the quintessence of gruesomeness”. It had a limited release two years later, and was then re-named Daughter of Horror in 1957, and given a VoiceOver narration by Ed McMahon. Well ahead of its time, it is a startling portrait of a woman working through vivid emotional trauma to come to terms with her troubled family past.

Dementia was Parker’s only film, expanded from a short, it barely makes the full length feature category. Garnering cult status after appearing on TCM’s late night horror spot ‘The Underground’, furore for the film’s strange blend of Gothic and fantasy horror gradually developed.

It came into being as a result of a dream experienced by John Parker’s then secretary Adrienne Barrett, who plays the main character. Awakening from a nightmare in a squalid hotel room in the back streets of Los Angeles (where the film was also shot), ‘the gamin’ begins her journey into the deep recesses of her mind – whether real or imagined. Clearly her reverie connects with some deep hidden anxiety. Armed with a flick-knife she sets off into the night where darkness envelopes her, along with a string of menacing and exploitative characters. An interesting companion piece to The Cabinet of Dr Caligari (1920), Dementia is also a harbinger of the sinister brand of psychological drama  that would follow: The Cabinet of Dr Caligari (1920) : Roman Polanski’s 1965 outing Repulsion strikes a chord, although visually Dementia connects with Guy Maddin’s hallucinatory fantasy outings such as Keyhole (2011) or even the cult classic Blue Velvet (1986). There are film noir and expressionist elements in the oblique black and white camerawork, the shadow-warped backstreets and pervasive paranoia. Narrative-wise Dementia could even come out of the pages of a Shirley Jackson novel with its chillingly sinister sense of foreboding; the heroine sinking into madness, consumed by terror.

Dialogue is minimal – apart from the occasional scream or laughter – the focus is on tone and atmosphere, with an unsettling soundscape by George Anthiel (Ballet Mécanique). ‘The gamin’ rushes through the empty streets where she collides with a series of weirdos and wayfarers (including a deranged flower-girl), culminating in a salutary meeting with the lascivious, cigar-chomping Bruno Ve Sota. He takes her on the town, only to be mesmerised by a suggestive nightclub performer.

Meanwhile the woman is gripped by a fantasy of her own which takes the shape of a foggy graveyard vignette, where she is approached by a black-hooded man carrying a lamp. As she stares down at her mother’s grave, the incongruous figure of a glamorous woman is seen smoking on a chaise-long. The woman – potentially her mother – is involved in a violent encounter with a smirking man. These characters are clearly symbolic yet shrouded in mystery, and the evening comes to a dreadful end.

The director (1899-1980) remains an elusive figure. According to a back copy of Variety magazine he was the son of Hazel H Parker who owned a chain of cinemas in Oregon.

ON BFI DUAL FORMAT BLU-RAY/DVD/DIGITAL on 19 OCTOBER 2020 | simultaneous release on iTunes and Amazon Prime |EXTRAS include a newly recorded commentary, and an alternative cut of the film, retitled Daughter of Horror (1957) which has added narration by actor Ed McMahon.

Based on James Leo Herlihy’s 1965 novel, scripted by Black List victim Waldo Salt, John Schlesinger’s 1969 film adaption of Midnight Cowboy is still a landmark in film history. Not only were gay men shown for the first time in mainstream history, the hero’s broken sexual identity (in the novel Joe Buck is raped by two men) is an equal first. Schlesinger excels like in his two other epics, Far from the Madding Crowd (1967) and Day of the Locust (1975), because he takes his time to develop his characters in all their ambiguity.

Joe Buck (Voigt) sees himself as stud, who leaves his small town Texas home for the glittering prizes waiting for him in New York. But Joe is anything but like John Wayne, his hero. Left by his mother with his granny, who looked after him affectionately, he was in love with Annie (Salt), a ‘nymphomaniac’, who is put into psychiatric care by her father. But Joe feels safe in his Cowboy outfit, bringing a brand new, all conquering identity to the Big Apple. And soon he picks up veteran sex worker Cass (Miles), having a great time – before he asks for money. Needless to say, that he is the one who pays – his bravado personality punctured immediately. Meeting small-time conman Ratso Rizzo (Hoffman), costs him more money and a further deflation of his Ego. He spends the winter in Rizzo’s unbelievable derelict squat, trying his luck as a rent boy, but mainly looking after the deteriorating Rizzo, whose tuberculosis is getting worse. After he meets Shirley (Vaccaro) at a sort of Warhol party, his luck seems to have changed. But soon the duo is back at the condemned flat. And again, Joe conjures up a magic cure for salvation: to finance a trip for two to Miami, he attacks and (perhaps kills) a customer. Alas, only one of them will arrive.

Midnight Cowboy is told like a latter-day Hardy novel, with Jude the Obscure a likely comparison. Like in most Hardy novels, poverty and (self) delusion lead to violence. Joe is the only one, falling for his macho image, and he pays for affection of the only love-object he has (Rizzo) by loosing him too. DoP Adam Holender’s images are dark and grey, (Rizzo’s flat) and a garish colour of glittering New York, for which nobody falls. The gay men Joe meets live in depraved circumstances, only a little better off than Joe. This is a feature of decline and deprivation, Joe is caught in his own spider web of dishonesty and deceit, the turmoil from Texas is following him. Unable to adjust to any reality, he is driven to self-distraction: he is Rizzo one step removed. In its total bleakness, Midnight Cowboy goes very much again the grain of a society, in which clean sex and clear sexual identities were the pillars of a positivistic consumer society, which does allow no deviation. This way, Schlesinger is ahead of the changes which were on its way. With Annie, Joe and Rizzo are a trio of victims of a society, whose celebrated superficial optimism was to collapse in the Vietnam War and the Civil Rights movement – closely followed by Stonewall. AS

Isabelle Adjani plays a sensual pert-bottomed coquette in Jean Becker’s flirty revenge thriller based on Sébastien Japrisot’s script from his novel of the same name. In true petulant form, Adjani originally rejected the part but after reconsidering she came back to play Elle, kicking Becker’s second choice Valerie Kaprisky into the long grass.

It doesn’t take much to get French men going, so when Elle prances into a small French village in the Vaucluse the locals are predictably hot to trot. But the tone soon shifts when it turns out the lusty long-legged temptress is more interested in getting her own back rather than conquering hearts in this increasingly unsettling and complex drama.

The action unfurls through the eyes of the various characters as elements of trickery, lies and exploitation all come into play in this vivid yet surprisingly subtle film “du look”. Japrisot’s bold characterisations reveal multi-layered personalities in a sinuously gripping storyline where nothing is black and white amusingly played by a cast led by the seductive Adjani in luminous form. MT