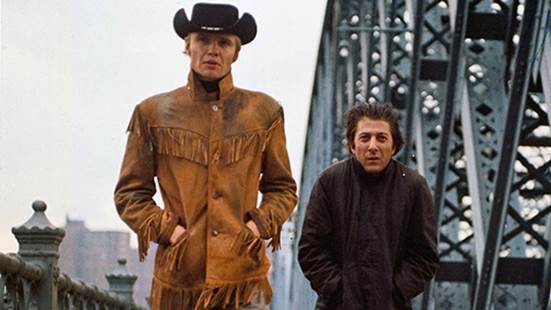 Based on James Leo Herlihy’s 1965 novel, scripted by Black List victim Waldo Salt, John Schlesinger’s 1969 film adaption of Midnight Cowboy is still a landmark in film history. Not only were gay men shown for the first time in mainstream history, the hero’s broken sexual identity (in the novel Joe Buck is raped by two men) is an equal first. Schlesinger excels like in his two other epics, Far from the Madding Crowd (1967) and Day of the Locust (1975), because he takes his time to develop his characters in all their ambiguity.

Joe Buck (Voigt) sees himself as stud, who leaves his small town Texas home for the glittering prizes waiting for him in New York. But Joe is anything but like John Wayne, his hero. Left by his mother with his granny, who looked after him affectionately, he was in love with Annie (Salt), a ‘nymphomaniac’, who is put into psychiatric care by her father. But Joe feels safe in his Cowboy outfit, bringing a brand new, all conquering identity to the Big Apple. And soon he picks up veteran sex worker Cass (Miles), having a great time – before he asks for money. Needless to say, that he is the one who pays – his bravado personality punctured immediately. Meeting small-time conman Ratso Rizzo (Hoffman), costs him more money and a further deflation of his Ego. He spends the winter in Rizzo’s unbelievable derelict squat, trying his luck as a rent boy, but mainly looking after the deteriorating Rizzo, whose tuberculosis is getting worse. After he meets Shirley (Vaccaro) at a sort of Warhol party, his luck seems to have changed. But soon the duo is back at the condemned flat. And again, Joe conjures up a magic cure for salvation: to finance a trip for two to Miami, he attacks and (perhaps kills) a customer. Alas, only one of them will arrive.

Midnight Cowboy is told like a latter-day Hardy novel, with Jude the Obscure a likely comparison. Like in most Hardy novels, poverty and (self) delusion lead to violence. Joe is the only one, falling for his macho image, and he pays for affection of the only love-object he has (Rizzo) by loosing him too. DoP Adam Holender’s images are dark and grey, (Rizzo’s flat) and a garish colour of glittering New York, for which nobody falls. The gay men Joe meets live in depraved circumstances, only a little better off than Joe. This is a feature of decline and deprivation, Joe is caught in his own spider web of dishonesty and deceit, the turmoil from Texas is following him. Unable to adjust to any reality, he is driven to self-distraction: he is Rizzo one step removed. In its total bleakness, Midnight Cowboy goes very much again the grain of a society, in which clean sex and clear sexual identities were the pillars of a positivistic consumer society, which does allow no deviation. This way, Schlesinger is ahead of the changes which were on its way. With Annie, Joe and Rizzo are a trio of victims of a society, whose celebrated superficial optimism was to collapse in the Vietnam War and the Civil Rights movement – closely followed by Stonewall. AS