Heat and Dust was the twelfth (of twenty-seven) collaborations between director James Ivory, producer Ismail Merchant and screenwriter Ruth Prawer Jhabvala. Based on the Booker Prize winning novel, the screen adaptation is a break with the social realism of the trio’s earlier features such as Shakespeare Wallah (1965). Its visual opulence made it by far their most successful feature at the box office to date.

Heat and Dust is a lush evocation of the sensuous beauty of India, sashaying between the 1920s and the 1980s in an epic of self-discovery, starring Julie Christie, Shashi Kapoor, and Greta Scacchi in her breakthrough role, with a strong supporting cast

When BBC researcher Anne (Christie) inherits the writings of her great aunt Olivia in 1982, she travels to India to find out more about the ‘scandal’ Olivia caused in 1923. The narrative tells the parallel story of both women. Olivia was married to the naïve and conventional Colonial Civil Servant Douglas Rivers (Cazenove), who had no clue about Olivia’s emotions. Bored by the stifling narrow-mindedness of the ex-patriate community, Olivia soon meets the sophisticated maverick Nawab (Kapoor) who, in his role as Viceroy, runs his private army, often indulging in violence on a grand scale. Olivia falls in love with him, but when she gets pregnant, decides on an abortion for fear of the obvious repercussions. Running away from the British hospital and the reactionary Chief Medical officer (Geoffrey) after the botched surgery, she flees to Kapoor, spending the last years of her life in a villa in the mountains where Kapoor, now deposed by the British, rarely visits her.

Anne traces Olivia’s steps, meeting on her way a young boisterous American would-be-monk (McCaughan), who is only interested in sleeping with her. But his body cannot cope with the foreign lifestyle and diet: Anne puts him into a train back to the USA. In her rooming house, she falls in love with Indor Lai (Hussain), her landlord. She too becomes pregnant, wanting to abort the baby at first, but changing her mind and planning to give birth in a hospital, near the villa, where Olivia lives out her lonely days.

Very much influenced by the writing of E.M. Forster – whose novels would be filmed later by Merchant/Ivory/Jhabvala – Heat and Dust is a not so nostalgic look back to the days of the Raj, carried by the spirited Scacchi, who injects a feeling of joie de vivre to the role, growing increasingly melancholy. The 1980s segments are comparably less remarkable. But the feature belongs to DoP Walter Lassally, who not only shot the New English Cinema (A Taste of Honey, Tom Jones) but also won an Oscar for Zorba the Greek. The languid but vivid images of British rule in India would go on to inspire a generation of cinematographers, taking their cue from Walter Lassally. Heat and Dust, whilst not as stunning as the more mature Howards End, is nevertheless a trend setter: The legendary David Lean finished his career with the Forster adaption Passage to India in 1984. AS

NOW ON CURZON WORLD AS PART OF THE James Ivory series. 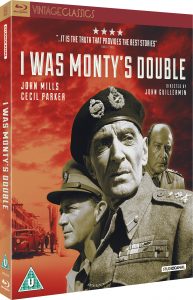 During the war years doubles often served as decoys to divert the enemy away from the main action. One such doppelgänger was ME Clifton-James whose striking resemblance to General Montgomery made him the ideal candidate to impersonate him during a special assignment in North Africa with D-Day fast approaching at the end of the Second World War. And he really is terrific in the role, successfully drawing German troops away from Normandy and becoming both a hero and a major military target.

The riveting real story has been amusingly adapted for the screen by Bryn Forbes providing the drama for John Guillermin’s entertaining caper which stars his wife Peggy and a top-tier array of British talent from the era including a chipper John Mills, Leslie Philips (looking rather pleased with himself), John Le Mesurier (playing it rather severely against type), Michael Hordern and even Marius Goring. I WAS MONTY’S DOUBLE is smart, astute and pacy as it powers along convincingly in Basil Emmott’s slick black and white camerawork. As Clifton James prepares for his role of a lifetime there’s never a dull moment both in the tensely conspiratorial interior scenes and on the widescreen – with some terrific set pieces such as the landing in Gibraltar and North Africa. Guillermin’s eclectic career path would see him directing Orson Welles in the 1966 mystery thriller House of Cards and Paul Newman and Steve McQueen in The Towering Inferno (1974). MT

Based on the Broadway play of the same name by Garson Kanin, and scripted by Albert Mannheimer, Born Yesterday is not one of George Cukor’s most dynamic features. The film’s plus side is Judy Holliday, who, reprising her Broadway role, won Best Actress at the Oscars. But Cukor’s direction is a little impersonal, and the feature never quite breaks free from its theatrical origins.

Harry Brock (Crawford) is a crook and a mini-tycoon, arriving in Washington with his mistress Billie Dawn (Holliday), to bribe a politician. Helped by lawyer Jim Devery (St, John), he sets in motion a great scheme, but suddenly decides that Billie isn’t good enough just as she is (an ex-revue girl), and should be  be educated to a higher standard to make worthy marriage material: wants her as a wife – not for love, but for insurance purposes: he has made over some properties to her, and a wife cannot testify against her husband. Journalist Paul Verral (Holden), does a fine job of her re-education – before an emancipated Billie upsets the applecart.

There are several reasons why Born Yesterday doesn’t really catch fire: first of all, the 1950 drama has not aged well; and lines like “Yes, you are right, I am stupid and I like it” (Billie) and “Maybe I slapped you a couple of times” (Harry) are not funny today, even though they may have raised a titter back in the day. Secondly, there is an awful lot of preaching going on, and DoP Joseph Walker (who extensively worked for Capra and Hawks) cannot do much to liven up the proceedings. Even Holliday’s sparkling, Oscar worthy performance is questionable: she is hardly a match for Bette Davis (All about Eve) or Gloria Swanson (Sunset Boulevard). Far too verbose and sanctimonious, Cukor’s direction falls between a screwball comedy and a muted pre-feminist manifesto, leaving a rather stuffy and stultified box of tricks. AS

AVAILABLE ON BLURAY from 21 JANUARY 2019

Set in Prohibition-era Chicago, this classic of all classic comedies features an all-star cast of Tony Curtis, Jack Lemmon and Marilyn Monroe. The men play a couple of struggling musicians in the wrong place at the wrong time when they witness the Valentines Day Massacre. Finding themselves on the run from the mob, they accept a new gig out of town as part of an all-girl jazz troupe, where they will meet Marilyn Monroe. Dragged up and made-up they’re soon raring to go – but can they keep their act together?

The film played at BFI London Film Festival 2018 and will open at the BFI Southbank and at selected venues across the UK courtesy of Park Circus.

Director Stanley Kramer (1913-2001) often used his films for progressive arguments: Judgement at Nuremberg, On the Beach, Ship of Fools and Guess Who’s Coming to Dinner are a few examples. INHERIT THE WIND is a rerun of the famous “Monkey Trial” of 1925, when a young school teacher was on trial in 1925 because he was teaching Darwinism and denied the biblical account of creation.

Needless to say, this argument is hardly an historic one: ten years ago, 38% of American teenagers believed that God created the universe within the last 10 000 years, and 54% of adults do not believe that humans evolved from other species. In 2006 Darwinism was on trial again, this time in Dover, Pennsylvania.

In the original Monkey trial in Tennessee, schoolteacher John T. Scopes was accused of violating the recently passed law, stating that nobody was allowed to deny the biblical story of creation. Scopes was defended by star attorney Clarence Darrow, whilst the prosecution was led by three-time presidential candidate William Jennings Bryan. To emphasise that that nothing much has changed, Darrow’s hefty fee was paid by the Baltimore Sun papers, represented by the famous journalist H.L. Mencken, who covered the trial extensively.

In Kramer’s feature Darrow becomes Drummond (Tracy), Bryan is HarrisonBrady (March), Scopes is called Cates (York) and Mencken morphs into EK Hornbeck (Kelly). The courtroom battle is centrepiece of Inherit: Tracy and March slog it out in the best Hollywood tradition; their speeches are long and passionate. After judge Mel Coffey (Morgan) has sided with the prosecution and disallowed Drummond’s request to hear six scientific witnesses, the lawyer calls Brady to the stand – as a witness for the defence. Brady, bombastic and grandiloquent, cannot resist the bait: when quizzed on biblical details, Brady goes so far, as to nail down the hour of creation exactly: Nine a.m. on October 23rd 4004BC.

The scenes outside the courtroom are mixed: A preacher and his followers stage a fair in the town of the trial, presenting a smoking monkey, whilst a barker agitates the masses, telling them, that this monkey is proof, that humans were not preceded by monkeys. A sub-plot, involving the engagement of Cates with the preacher’s daughter Rachel (Anderson) does not add anything; the preacher, frothing at the mouth, calling his daughter “a creature of the devil” is simply wildly over the top.

In spite of its length and overly verbose content, INHERIT is still a fine example of challenging fundamentalism. Acted brilliantly by the two male leads, recreating the atmosphere of ignorance and aggression in the American South  the feature is carried by the images of veteran DoP Ernest Laszlo, who started his career in the 1920, and was active into the late 70ies (Logan’s Run). His roving camera makes the courtroom look more like a battlefield than a house of law. AS