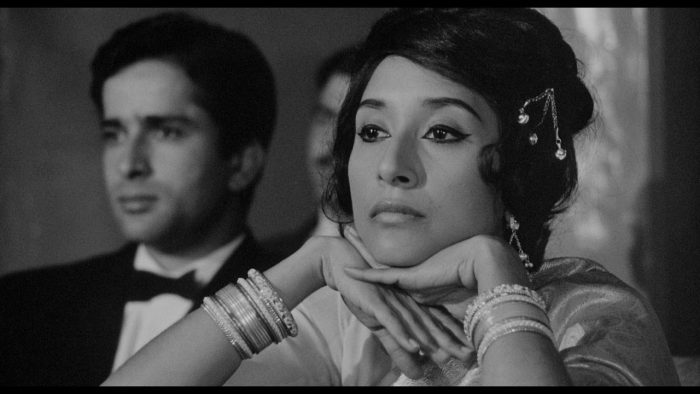 This is the second feature of writer/director James Ivory and producer Merchant Ivory, co-scripted by the latter’s wife Ruth Prawar Jhabvala; the trio would go on with opulent productions like Heat and Dust and Howard’s End, describing the fate of strong women in male-dominated, authoritarian societies.

This is about change and belonging: The Buckingham parents Tony (G. Kendall) and Carla (Liddell) tour India with a travelling group of players, including their daughter Lizzie (F. Kendall),  bringing Shakespeare to a country changed beyond belief after the British left for home. But the change is not only a cultural one; Indians are saying goodbye to their own heritage in a post-colonial era that replaced Shakespeare with Bollywood and old palaces of Maharajas with hotels. Lizzie, who plays Ophelia and Desdemona on stage, falls for Indian playboy Sanju (Kapoor), who also has a mistress: Bollywood actress Manjula (Jaffrey). While the Buckinghams and their plays become more and more tacky, Manjula represents a modern India, which is aggressively taking the place of the old – be it Indian or British. Manjula commits a faux-pas on purpose: she arrives at the theatre with only ten minutes of Othello to go. But the nomadic players have no recourse, they are redundant in a country where they don’t belong any more. They are rootless, like Ruth Wilcox in Howard’s End. “Everything is different when you belong to a place. When it’s yours’, says Carla Buckingham wistfully. Her daughter has never set foot on her “home” country.

Kendall’s and Lidell’s experience with their own touring company have been an inspiration for the feature, stage and reality overlap. When Tony (as Othello) talks endlessly to himself, before facing Desdemona for a last time and in the real world, Manjura enters with aplomb. Finally, with Feste’s song in “Twelfth Night”, the “rain raineth”everything away, it becomes not only a summing up for the play, but the fate of the actors, swept away by history.

The misty black and white images express the evocative fragility of the narrative, there is much to admire, apart from the acting – Madhur Jaffrey would win the Prize for Best Actress at Berlin Film Festival in 1965. The score is by none less than Satyajit Ray. His long-time collaborator, DoP Subrata Mitra, conjures up sensitive images of a  group of Thespians who are lost, languidly suffering a maudlin nightmare. Ironically, Shashi Kapoor’s marriage to Felicity Kendall’s sister Jennifer (who made an uncredited appearance) was one of long-lasting happiness until her death aged 50. AS