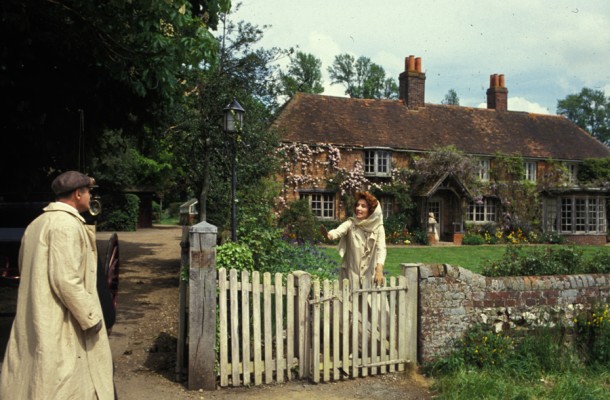 Based on E.M. Forster’s classic 1910 novel, HOWARDS END is a towering achievement considering the team that made the film – apart from the actors, of course – were not British. American James Ivory got together with Indian Ismail Marchant and asked Polish Ruth Prawer Jhabvala to write the script, which won her an Oscar. Together they evoke English sensibilities to make a film that feels more English than the current state of affairs, harking back to an era of values that have now more or less disappeared. It remains the most successful Forster screen adaptation, and for quite a modest budget.

HOWARDS END is the story of three families: the Wilcox clan, a wealthy industrialist family, the (German) Schlegels, progressive Bohemians in the Bloomsbury mould and the ever so humble middle class couple Leonard and Jackie Bast, forced together through necessity rather than love. Set just before the outbreak of the First World War, which would change Europe forever, the story explores the subtleties of the English class system: a delicately balanced affair so gracefully nuanced in Prawar Jhabvala’s intelligent scirpting.

The Schlegel family meet the Wilcox’s at a party where the youngest of the three siblings, Helen (Bonham-Carter) grows close to Paul Wilcox (Bennett), exchanging a midnight kiss. Since Paul, as the youngest brother “has no money of his own”, he is set to seek his fortune in Nigeria so the engagement has no future. Later Margaret Schlegel (Thompson), the oldest and most responsible of the siblings, bonds with Ruth Wilcox (Redgrave) over the value of spirituality and the dying Ruth leaves her family home, Howards End in Hertfordshire, to Margaret. Her husband and soon to be widower Henry (Hopkins), the unchallenged patriarch of the family, incandescent with discrete rage, burns his wife’s hand-written will, with the support of his daughter Evie (Redgrave) and trumped up son Charles (Wilby) and fiancée Dolly (Lindemann). Touched by the kindness of city clerk Leonard Bast (West), who lends Helen his umbrella to shelter from the rain, a socially awkward friendship develops between Bast and the Schlegels who make an ill-advised suggestion regarding his employment, that will later regret.

Margaret is in no doubt of her position as an ageing single woman and sensibly grows closer to Henry who falls back on her stalwart emotional support soon after Ruth’s demise. The two marry and at the wedding party of Charles and Dolly, Leonard Bast and his wife Jackie (Duffett) make their presence known, in no uncertain terms. An embarrassing truth then emerges that destabilises Henry and he threatens to call his wedding off. Meanwhile Helen,  frustrated and left on the sidelines when her siblings move on, unwisely takes up the Bast’s cause, queering the pitch and crossing the fine line between social milieux as the final chapter of the saga enfolds.

Forster’s novel cleverly illustrates both strong and reckless leadership: Margaret takes responsibility for her sister Helen, who is always embroiling herself in emotional battles, which Margaret has to resolve. Her brother Tibby (Magenty), is a drip, but also a narcissistic student, plagued by the same self-importance indulgence as Helen. It falls to Margaret, to keep the capricious duo afloat. In contrast, Henry Wilcox is strong and pragmatic provided he has a female partner by his side. His children are, in very different ways, countermanded by his dominating authority, having had no chance to develop on their own strength of personality. When tragedy strikes and his position in the family is at risk, Henry tries to be conciliatory. Sitting tired and broken on the lawn, is metaphor and symbolic of the endgame: the slaughterhouse of the Great War. Finally, Leonard Bast is a man of principles, but has no means to realise them. From today’s perspective, Forster’s ending, that the meek should inherit the world – in this case Howards End – is rather wishfully optimistic. Yet in a clever way, this is what eventually happens. Emma Thompson’s brilliantly elegant performance as Margaret, cleverly negotiating her way through enemy lines to victory for all concerned, while maintaining a British stiff upper lip.

DoP Tony Pierce-Roberts (The Remains of the Day), conjures up lush and languid images of the countryside, and rather more detached and austere ones in the London scenes. The countryside is shown as a refuge for a dying era; the city a dark and rather Dickensian place of torment. Emma Thompson reigns supreme, whilst Hopkins is at his acid best. The doom-laden atmosphere prevails in the soft English summer settings, and Ivory makes sure that the emphasis is always on the second word of the title. MT