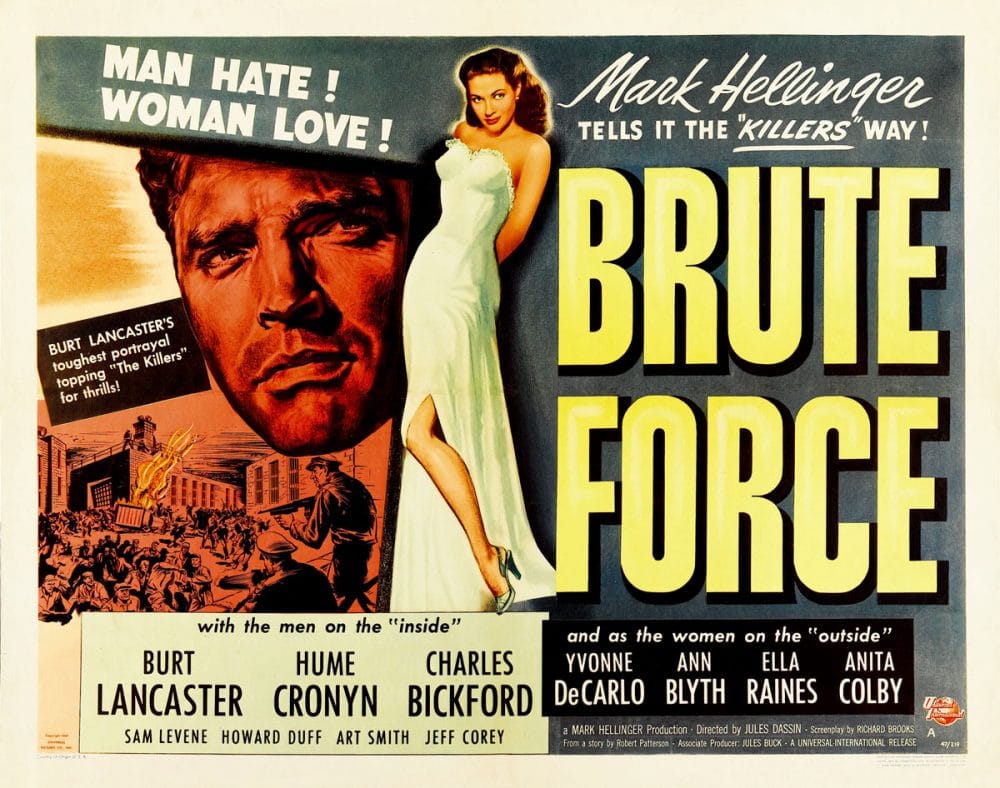 There are prison dramas and there are prison dramas. Jules Dassin’s 1947 crime thriller falls into that strange arena of social hell where its prison bars also exist outside of a real prison. BRUTE FORCE is an allegorical movie, but not quite in the existential manner as viewed by some film commentators. They cite Sartre’s No Exit as a reference point. Yet rather than hell being the never-ending company of other people, it’s more that hell is the forced accommodation of prison codes that inhibit freedom. When the drunkard Dr. Walters (Art Smith) says, at the tragic climax of Brute Force, that “Nobody’s really free.” thereby denouncing a crushing, unjust and regulated system that pervades society as a whole.

“The point hammered home is that the prison system reflects the values of a society, Dassin castigates society for creating and then turning a blind eye towards the brutality and insensitivity of a prison system that offers no chance for rehabilitation.”

Things “hammered home” with “no chance for re-habiliation” is also the outcome of Audiard’s 2009 film A Prophet. Gradually it dawns that only death, in the form of the gangster driven car that follows Tahar Rahim, outside the prison gate, will release him from his stress. Or maybe just before that you decide to risk everything, ram the gate with a truck (Brute Force) to create an apocalyptic inferno (Fire, explosions and machine-gunning of inmates) sharing a kinship with James Cagney’s ecstatic ‘madness’ at the end of White Heat. Here are some plot details to keep such fatalism percolating.

Brute Force sees Joe Collins (Burt Lancaster) returning from solitary confinement in Westgate Prison. He is firmly decided to escape. Westgate’s tired and ineffectual Warden Barnes (Roman Bohnen) is being pressured to improve discipline. Jailor Captain Muney (a name you want to pronounce as Monster), played by Hume Cronyn, is a Nazi thug who listens to Wagner’s Tanhauser overture as he beats prisoners with his rubber truncheon. Prisoner violence inflicted on prisoner informers means that horrible restrictions are imposed. Dr.Walters warns of the explosion that will happen. He demands a radical overhaul of prison treatment and secretly confides with Collins. Yet reforms will be a long time coming. “Nothing is OK. No way. Till we’re OUT!” snarls, the often half-naked Burt Lancaster at his most primal.

Brute Force belongs to a group of film noirs directed by Dassin. That is Thieves Highway, Night and the City and The Naked City. The cinematographer of Brute Force and The Naked City is the veteran William Daniels. The first film has a poetic realism whilst the second is justly famous for its location shooting. The look of Brute Force is one of unremitting despair and confinement. Its fatalistic tone is made immediately apparent in the opening sequence shot in the rain; an intense black and white rain that looks as if it will chill the bones of everyone. Difficult to make rain look both frightening and ominous yet Daniels brilliantly creates such atmosphere (The only rain I can recall as bleak as this is the downpour during the freaks revenge in Tod Browning’s Freaks). William Daniels is most celebrated for helping to create the screen image of Greta Garbo. But he was also responsible for the harrowing Death Valley desert scenes of Stroheim’s Greed. He was a remarkable artist capable of producing tortuous extremes of weather and painting human suffering for the camera, whilst making Garbo luminous.

Brute Force’s script is tough and anti-establishment. Two months after the film’s release, the HUAC (House of Un-American Activities) was formed. Brute Force was suspiciously viewed as the work of communist infiltrators. There are vivid performances from Burt Lancaster and Hume Cronyn. Some cracking direction by Dassin – especially in Brute Force’s final electrifying 15mins. I love the way fire curls round the base of the prison-gate clock, seemingly ticking on as if to say “I’ll survive this, whilst you will burn doing time here.” If Brute Force has a niggardly fault then it’s to be found in the casting of the Trinidadian actor Sir Lancelot as Calypso. He is a perfectly good actor but unfortunately his part was written up as a chorus for the film in the form of calypso-style ballads. They sound far too pat and badly underline the despair of the film. Thankfully after half an hour, the songs are dropped and only very briefly re-appear at the end.

Apart from A Prophet, the greatest foreign prison break films are still Bresson’s A Man Escaped and Becker’s Le Trou. The best British prison-life film is Joseph Losey’s The Criminal. And whilst acknowledging the power of Siegel’s Escape from Alcatraz, trying hard to forget The Green Mile and The Shawshank Redemption, then Brute Force maybe my favourite Hollywood prison drama. It’s all about incarceration and the rules of the game will never be lightened. ALAN PRICE©2018 ****

TALES FROM THE URBAN JUNGLE: BRUTE FORCE and THE NAKED CITY now available on Arrow Academy Blu-Ray | and on MUBI