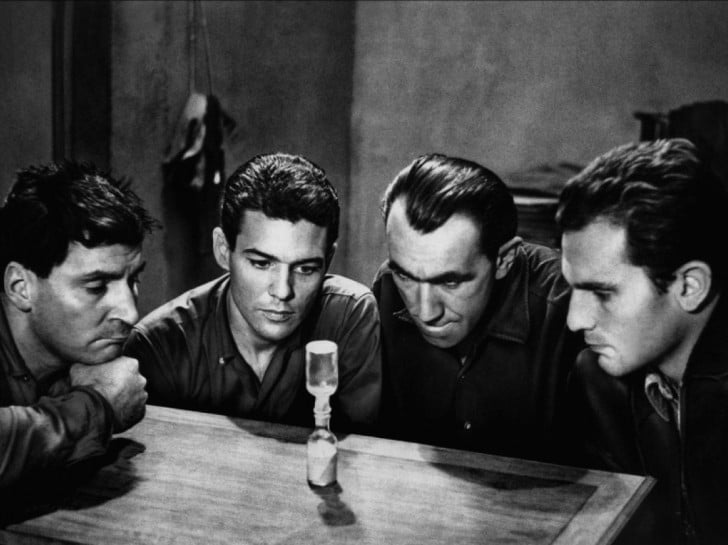 It was bold indeed of Jacques Becker to make another prison escape film so soon after Robert Bresson had created the genre’s masterpiece, Un condamné à mort s’est échappé (1956); but the gamble paid off handsomely.

Based on a book by Jose Giovanni and adapted by the writer, along with Becker and Romanian-born Jean Aurel, the plot is simple: four long-serving inmates planning an elaborate escape cautiously induct fresh blood into their scheme in the shape of a short-term detainee from another cell-block. Will he have the same commitment in his desire to escape?.

Like Robert Rossen’s Lilith (1964), La Trou seen in isolation looks more like the debut of an exciting new talent than the valediction of a veteran in his fifties about to be taken before his time. Released shortly after Becker had died of a heart attack aged just 53, when confronted with such a fresh and modern-looking piece of filmmaking one is vexed by the question of where Becker would have gone next, which we shall never know.

The film remains unusual for its lack of a music score (composer Philippe Arthuys, significantly, is actually credited at the end with ‘Illustration sonore’), and I can even forgive this film for setting a deplorable precedent by being possibly the first to have no credits at the start; they all come at the end, to the accompaniment of a simple piano arrangement of Rubinstein’s ‘Melody in F’ which may have been intended as discrete mockery on Becker’s part of the grandiose use of Mozart’s ‘Mass in C Minor’ at the conclusion of Bresson’s film. DoP Ghislain Cloquet (who was married to Becker’s script-editor daughter, Sophie) achieves tremendous rhythm with his kinetic black and white camerawork despite the claustrophobic and squalid prison confines. Jean Keraudy, a veteran of the original escape, segues smoothly into the uniformly excellent cast; while among the staff, Jean-Paul Coquelin has a beguiling air of dry good humour in his scenes as the cell block lieutenant. Richard Chatten