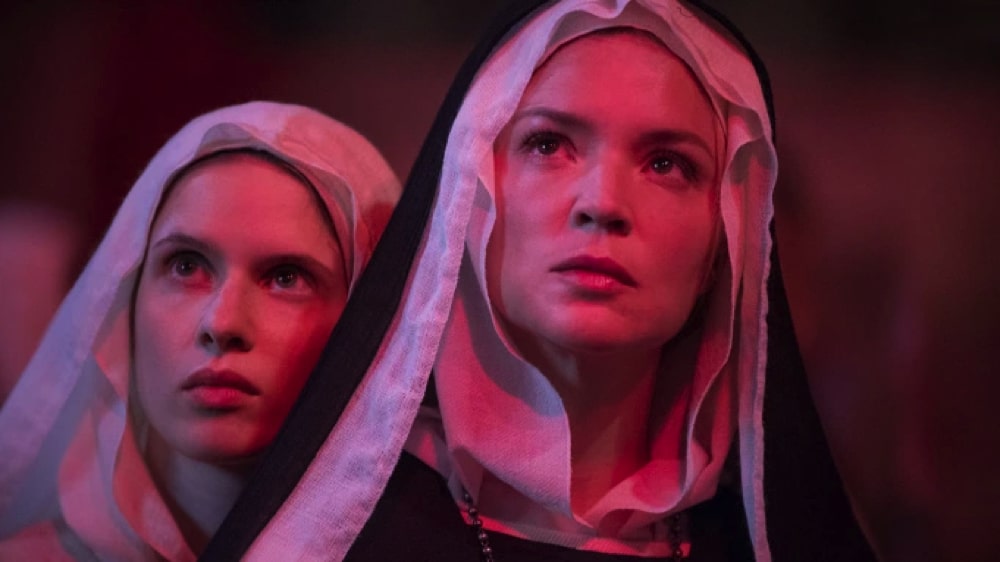 Dutch director Paul Verhoeven is still best known for his scandalous sex saga Basic Instinct. It set the 1990s on fire with Sharon Stone’s memorable naked crutch shot and a brilliant script by Joe Eszterhas that felt racy and groundbreaking. Next came Showgirls and Elle, notable for their leading ladies Gina Gershon (who won a Razzie award) and the incandescent Isabelle Huppert.

Benedetta attempts to recreate the world of Ken Russell’s The Devils and Walerian Borowcyck’s Blanche without their narrative ballast despite an opening credit that proudly announces “based on a true story”: of a naughty nun in Renaissance Italy entitled’ Immodest Acts’ by one Judith C Brown.

Benedetta Carlini claimed to have seen a vision of Jesus and subsequently devoted her life to her saviour. But the only devotion here is to the misogynist male gaze in a shagged-out shaggy dog story that drew sniggers of derision from an audience of critics at its Cannes premiere in 2021.

Benedetta is warned early on that “your worst enemy is your body,”. But this is a caveat that soon falls by the wayside when dark-eyed novice Bartolomea (Patakia) is admitted to convent escaping her father’s cruel abuse. The story soon takes a more sinister turn when the two are bonded by their fatal attraction – far less alluring or convincing that that of the Stone and Douglas affair.

What starts out a lushly-mounted period drama soon descends into a dark-edged Carry on at the Convent-style caper that is more corny than provocative. Verhoeven has a field day as his absurdist melodrama burns through a bloated budget in extraordinary set pieces, its lush Tuscan locations evocatively lensed by Jeanne Lapoirie. Under the influence of Bartolomea, Benedetta turns into a bodice-ripping virago with a deep baritone voice. Worse is to come involving CGI snakes, blood-letting and stigmata in scenes featuring a sexually ambivalent Christ on the Cross.

A series of torrid encounters between the two young nuns drives the pacy plot forward, Felicita soon ‘smelling a rat’ through a peephole in the convent wall. Verhoeven and his Elle writer David Birke attempt to add moral complexity to the story by suggesting that Felicita is jealous of ‘their thing’ and this catapults the film towards its ludicrous finale  playing out in Florence and featuring a glowering Lambert Wilson as the Catholic church’s top dog, the Nuncio.

Overstaying its initial welcome at two hours (plus) this clunky bonkbuster feels both tedious and exploitative. What could have been seductively subversive is just silly and salaciously over the top. We are left smirking in our seats by the showcase showdown – but not in a good way – not caring what happens, as long as it ends. MT

NOW ON GENERAL RELEASE FROM 15 APRIL