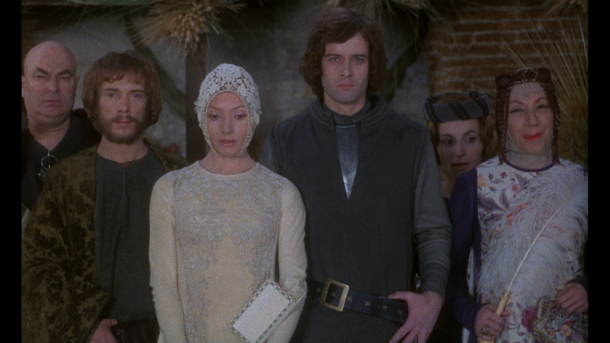 Thirteenth century France: An old baron (Simon) lives with his beautiful, pure wife, Branice, in an old gloomy castle. When the King (Wilson) comes to visit, he and his page Bartholomeo both immediately lust after the countess, who has to defend her honour against both of them. When the King, wearing Bartholomeo’s coat as a disguise, tries to enter Blanche’s chamber at night, he is injured by a man holding watch: Nicolas, Blanche’s stepson, who is secretly in love with his stepmother. The King pretends to the old Baron, that his page is to blame, but does not give up his quest to conquer Blanche. He sends his page away with a sealed message to his army commander, ordering him to attack the baron’s castle and keep Bartholomeo prisoner. The page, attacked by Nicolas, finds out what the King had planned for him, but gets walled in a room by the suspicious baron, after Blanche swears that nobody is in the chamber. On the King’s return, he is liberated, but has to fight a duel with Nicholos, who lets himself been killed. After leaving again, the King returns with his army, Blanche takes poison and the baron falls on his dagger, after chaining Bartholomeo to horse, which drags him to a slow death.

There are many elements of Borowczyk’s short film in BLANCHE: monks hide in wall cupboards, a dwarf runs amok, a white dove (symbol of Blanche’s innocence) flatters around the castle. Based loosely on Byron’s “Mazeppa”, the surrealistic elements in BLANCHE echo Buñuel, particularly of Viridiana, where a young woman also has to defend herself against old men, lusting after her. Setting and story also have their roots in Chaucer’s “The Millers Tale”, with the same theme dominating. Lastly, Blanche has also much in common with Bresson’s title heroine of Une Femme Douce, based on a story by Dostoevsky. Borowczyk begins by showing the castle as an idyllic backdrop, but he ends up with a portrait of a slaughterhouse. The King and his page are shown as vile, aggressive intruders, whilst Blanche and Nicolas (the true, but chaste lovers), die as victims of male lust and jealousy. Blanche wanders around dressed in white or grey, as if she is already mourning for herself.

The camera frames the action in a way that’s full of ambiguity: the locations are never what they seem to be; a simple room becomes a prison for the page and the dove. But Blanche wanders around naïve and trusting: Ligia Branice portrays a being from another world with subtlety and elegance. The men, apart from Nicolas, who seems to be too underwhelming, are brilliant in their lying schemes resorting to violence, when their plans fail. The music, played on contempo Medieval instruments, creates a poetic atmosphere, often contrasting with the brutal machinations played out. The final scene, shot from the POV of the dying Bartholomeo, dragged through the autumn landscape, is unforgettable. BLANCHE is a masterpiece, not only in Borowczyk’s oeuvre. AS

NOW ON DVD in a brand new restoration