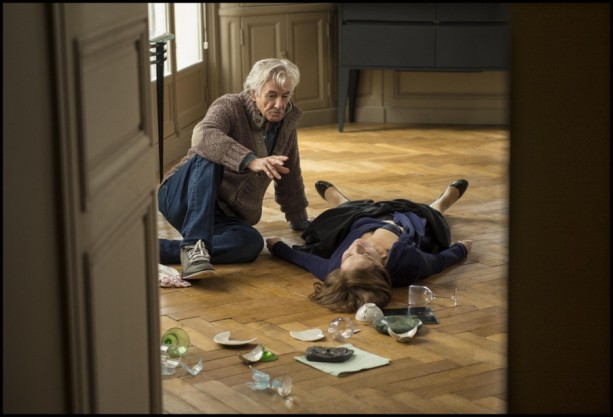 Dutch auteur Paul Verhoeven’s first French-language feature came to the Cannes Competition with magnificent Isabelle Huppert in a star turn that has just won her a Golden Globe for Best Actress. Slick and seductive, when it isn’t being violent in its glossy arthouse depiction of rape and twisted mysogyny, this is an upbeat, almost chipper tale of contemporary life, piqued with mordant humour. But what else would you expect from a director who brought us Basic Instinct and Showgirls?

ELLE features several strong female characters who are well-equipped to deal with their lives with sophistication and a certain élan. Wittily adapted from Betty Blue writer Philippe Djian’s novelIa, Isabelle Huppert plays Michele Blanc, a sexy and savvy businesswoman who is stylish and perfectly in control of her faculties. A leader in her field of video games, she deals with a masked intruder, who rapes her viciously in her sumptuous Parisian house, by bouncing back with disdain and aplomb – despite some serious injuries – not least to her self esteem. Brushing herself down and disposing of her elegant black decolté she gets back to work immediately with a mission to uncover her assailant. But the incident has sparked a surprising change in the way she responds sexually to the men around her. In the Cannes Film Festival press conference, the cast and directors refused to be drawn into a discussions concerning the controversial implications of the rape scenes. Ms Huppert said her character responded in a way that served the film’s narrative, and the work was purely fiction.

Verhoeven keeps the tension taut throughout the film’s running time – just proud of two hours. And the suspects are diverse but don’t intrude into the other themes of this intelligent comedy thriller. There is her suave neighbour Patrick (Laurent Lafitte) a banker whose marriage to his devout Catholic wife (Virginie Efira) provides some grounds for humour; ex husband Richard (Charles Berling), a wannabe novelist; Robert (Christian Berkel), the husband of her best friend and business partner, Anna (Anne Consigny) who both have sexual dalliances with her during the course of this entertaining drama – even her petulant son Vincent (Jonas Bloquet), who is dating Josie (Alice Isaac) a minx with whom he is expecting another man’s child, falls under the spotlight.

Perversely, the film’s comedy surfaces from incidents that could be perceived as troubling or negative in misogynist terms, yet the female leads respond with such self-possession and insight that the rape brings out greater weaknesses in the male characters rather than the female ones and Michele choses to pluck success and inner strength from the jaws of possible failure. This is very much a French film with its exuberant family crises, sexual complexity in the way the sparky characters treat each other with an attitude that many many consider rude or offensive.