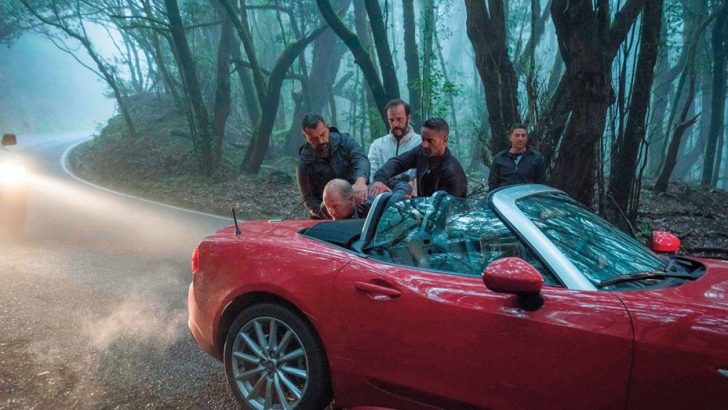 This Noirish Romanian arthouse thriller is not the first to use whistling as a vital part of its storyline. Last year’s Locarno Critics’ prize winner Sibel showed how vital this ancient style of communication is in isolated parts of the World. And La Gomera is one of them. The craggy hideaway in the Canaries is where a dark and sinuous double-crossing drama plays out. It also travels to the Romanian capital Bucharest, and Singapore. Swinging backwards and forwards in time tense The Whistlers is a rather forboding film with a retro feeling of the Sixties and another saturnine performance from Porumboiu’s regular Vlad Ivanov (who appearing in Tegnap and Sunset).

He is Cristi, a detective under surveillance from his colleagues who is rapidly finds out that this special language from local Spanish-speaking gangsters can keep him under the radar. Porumboiu’s clever lighting techniques and a ravishing score of modern classics and operatic arias keeps the action pumping to a surprising finale.

You may find the plot rather complicated and the crooks hard to identify (I did), but basically it goes as follows: Vast wads of illegal euros are being laundered in a mattress factory outside Bucharest whence they’re transported to the crime ring in Spain and Venezuela. The factory owner and middle-man is a petty criminal called Zsolt (Sabin Tambrea) and his girlfriend Gilda (Catrinel Marlon) seduces Cristi in the sexually-charged opening sequence (which takes us back to Basic Instinct). Meanwhile Zsolt’s boss Paco (Agusti Villaronga) instructs another honcho Kiko (Antonio Buil) to teach Cristi the whistling lingo. The place is riddled with surveillance cameras and no one can really be trusted in this edgy atmosphere of uncertainty so the arcane hissing comes in handy as a form of covert communication.

Meanwhile, Cristi’s sidekick Alin (George Pisterneanu) and their boss Magda (Rodica Lazar) make up the Police contingent. All these characters are out for themselves. La Gomera takes a leading role   with its inaccessible stony beaches, crystal waters and dense wooded hillsides. The final coda in Singapore doesn’t quite dovetail into the film and has a whiff of being added just to spice things up for the glamorous reveal in a light show taking place at the Gardens by the Bay.

In true noir style The Whistlers is not a long film and slips down easily – there are no deep messages here – despite its rather intractable plot. An ambitious and intriguing addition to the Romanian filmmaker’s oeuvre. MT