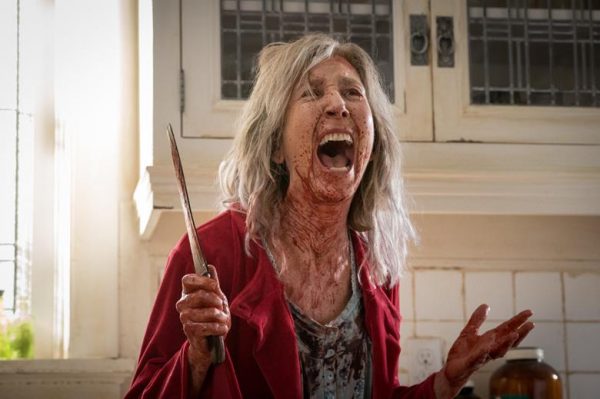 Nicholas Pesce had finally sold his soul to the Devil – the Hollywood franchise brigade – along with the cursed characters in his third feature – another inferior take on the popular 2002 Japanese film Ju-On (which has already spawned two American remakes). Gone is the edgy arthouse styling, the thoughful writing and the intriguing characterisation. The only thing that remains of his impressive sophomore outings are the widescreen panoramas and overhead shots that hover menacingly over cars and other vehicles unsuspectingly making their way to doom in the foggy dankness of their North American landscapes.

The atmosphere of unsettling dread is also still there, giving this bloodless horror outing an unmistakable shot in the arm along with an impressive cast that includes John Cho and Andrea Riseborough who looks wan and forlorn in her role of a recently widowed police detective investigating a weird haunted house that puts a curse on anyone crossing its threshold.

Slithering backwards and forwards in time yet mostly set in 2006, the film pictures Muldoon (Riseborough) newly arrived in town and putting her best foot forward with her self-contained little son (who would have made a much better Danny in the recent Shining-reboot). Work leads her to a forbidding mansion in a leafy boulevard where, in flashbacks to 2004 and 2005, it emerges that an estate agent (Cho) has been trying to sell the house for some mysteriously nebulous inhabitants who have also employed the services of an end of life counsellor (Jacki Weaver) to give compassionate support in an assisted suicide. Muldoon’s colleague (Bichir) has already reached a dead end with the case, but she is soon on the receiving end of macabre visions that haunt her day and night.

Pesce rose to fame with a bewitching black and white fable The Eyes Of My Mother that showcased his talent for creating stylish thrillers dripping with atmosphere and gripping storylines. Piercing followed two years later, a psychodrama with cinematic credentials and clever writing that captivated the arthouse crowd and critics alike, marking him out to be a distinctive auteur in the making. Pesce still writes and directs The Grudge with its morose and sorrowful undercurrent of profound loss – but brings nothing new to the gruesome party and few narrative surprises. The film actually feels cliched and tedious despite a modest running time, and the fractured narrative detracts from the suspense leaving us bewildered and bored when new characters suddenly appear in the shape of the odd couple in their seventies (Lin Shaye and Frankie Fasion) whose suitability as marriage partners fails to convince despite their best efforts .

Andrea Riseborough is delicate and believable as a mournful single mother dedicated to her profession, but the other characters are cyphers going through the motions in trying to add resonance to a series of bland provincial Pennsylvanians who don’t make us care if they live or die or escape their dreadful curse. Mr Pesce, please go back to your roots. MT