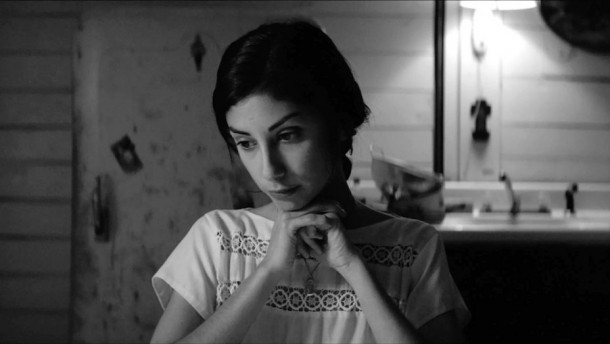 Nicolas Pesce cut his teeth in the world of music videos and his feature debut – an intense and stylish psychological thriller – is embued with the melancholy moodiness of Portuguese Fado laced with macabre American Gothic.

Set in a remote forested backwater THE EYES OF MY MOTHER could easily have lost its way but a clever script never allows the film to wander too far off the beaten track, eventually reaching a rather satisfying ending, while keeping our attention fixed on its mesmerising central character Francisca, played with captivating nonchalence by Kika Magalhaes. We first meet Francisca as a little girl (played by Olivia Bond) who whose slightly bohemian mother (Diana Agostini) has fetched up in a cattle farm in the wilds of New York State with her strong but silent husband after a lifetime’s practising eye surgery in her native Portugal.

Nicolas Pesce could be the US answer to Jonathan Glazer in his stylish ‘less is more’ approach to directing with a slowly mounting atmosphere of dread deftly complimenting the pristine look of the film. Zach Kuperstein’s elegantly composed black-and-white visuals turn what could have been a gory film into a gracefully poetic arthouse chiller: blood and bodily fluids ooze like obsidian ink and a chiaroscuro aesthetic transform the story into a modern classic with the same unsettling dread of The Night of the Hunter with Magalhaes’ subtle psychopath replacing Robert Mitchum’s Harry Powell, and a switcheroo male/female dynamic that appears in third act. Apart from the film’s strong visual appeal, the paucity of dialogue allows us to retreat into the deepest corners of the psyche to ponder over the implications and possibilities of a narrative that leaves so many questioned unanswered.

Bilingual Francisca is extremely close to her mother who has taught her all about anatomy and surgery not only leaving her skilfully au fait with dissection, but also making the process of carving up bodies completely natural. This will be crucial when her mother is murdered by a creepy stranger (Will Brill), not only leaving Francisca unfazed by her brutal death but also seemingly untraumatised in the aftermath (where he father keeps the man chained up in the barn), allowing Francisca to practise her surgical skills.

Her distant but respectful relationship with her father seems to have unleashed some kind of attachment anxiety in Francisca when she becomes an adult. Clearly she aches with loneliness, but rather than seek out an amorous encounter to avoid being alone, Francisca uses her talents to make sure nobody ever leaves her.

Most of the violence is tactfully alluded to rather than overt, and where brutality does occur it is often in silent scenes where Francisca demonstrates a tender and almost religious devotion. Ariel Loh’s atmospheric occasional score makes unsettling intrusions into the quiet moments without disturbing the sinister sense of terror. MT