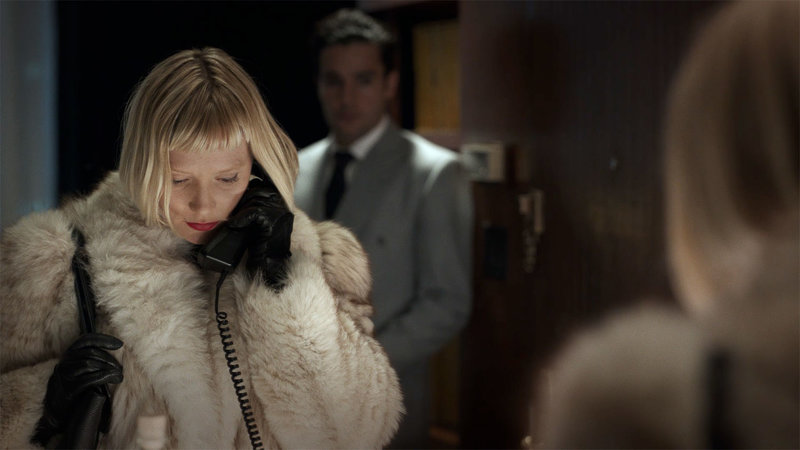 Writer director Nicoals Pesce (Eyes of my Mother) has adapted Ryu Murakami’s novel for the screen – with the same success that Takashi Miike had with Audition (1999), another Murakami work. The Eyes of My Mother was shot in black-and-white, as an homage to the film-noirs of the 40s, PIERCING – while not as good – has its aesthetic roots in the ‘Giallo’, Italian crime/horror films of the 70s, and there are echoes of Mario Bava and Dario Argento, and some early Brian de Palma.

The beginning could hardly be more disturbing: new father Reed (Abbott) stares down at his newborn, holding an ice pick. Stressed out by the baby’s constant squealing, he feels like using it. It comes as a relief  then to mother Mona (Costa) that Reed takes a break and moves out: his destination is a hotel, where he rents a room with a plan in mind to murder a prostitute. Every step is prepared and written down in a red notebook. Just to make sure everything goes he rehearses the process, acting out all the gruesome manoeuvres, including de-capitation.

But a phone call changes everything: his first choice of call-girl is running late, and Reed cannot wait: he orders an immediate replacement. When Jackie (Wasikowska) enters the hotel room, Reed is hyped up for the kill – but then he finds Jackie in the bathroom, stabbing herself multiple times in the thigh. But that’s just the start of a wild night.

Piercing is deliberately artificial: everything is composed for impression, its appeal is purely visceral; even the tall apartment blocks – the camera searching out illuminated windows – are not real. Jackie’s room is a composition in red and brown, a mausoleum of shadows dappled with light. She retains her sense of enigma: “I want you to wear my skin”, which also is ironic, because Jackie’s yen for sadomasochism is an obsession for both these characters.

There are flashbacks, filling us in on the childhood traumata they have suffered. Luckily, graphic violence is minimal, Piercing is much more L’Age d’Or than Slasher feature. Mona, in contrast to Jackie, is all mother and house wife – in the novel she bakes cookies – but Reed keeps her in the picture from the phone box. DoP Zack Galler creates a galaxy of effects which alone makes the film worth watching.

Music by Morricone and Simonetti (the latter’s score from Argento’s Tenebre) drives the atmospheric eeriness even more over the top; Wasikowska literally out-performing Abbott in the endgame of this dazzlingly dramatic psycho thriller: and the running time is just right for a spectacular B-picture with a morbid imagination. AS