64 years is the average life expectancy for a man in Ukraine. And Valentin is heading that way. Pleasant and voluble with his twinkling eyes and broad smile, he has spent most of his working life as projectionist at Kiev’s oldest cinema the Kinopanorama, that opened in 1958.

Preoccupation with his mother has clearly dogged and dominated his personal life. A chain smoker with false teeth – at one point he’s seen popping them in and swigging the cleaning fluid – he loves to visit the dancing girls in the next door casting agency nearby the cramped flat shares with his ageing mother who is confined to bed with chronic constipation. But Valentin is not the only colourful character, in this picaresque and gently humorous debut from promising Ukrainian filmmaker Yuriy Shilov, Valentin’s neighbour Silpa is a batty lonely old man who dyes his hair and drinks himself to oblivion.

Camerawork lends a voyeuristic feel to the semi darkness of pokey place where Valentin’s friends pass by to say hello through the brightness of the open window. Kiev is seen crumbling in its former grandeur, Valentin and his pals the idiosyncratic old guard keeping the show on the road in a rapidly changing world while several widescreen panoramas reflect the sheer vastness of Ukraine’s capital city with its traditional curative baths and magnificent Dnieper River, the fourth longest in Europe

But when the Kinopanorama finally goes up in smoke one night, its clearly time for Valentin to seek pastures new and this amiable Ukrainian is very much game. MT

Nariman Aliev’s feature debut is a powerful cri de coeur for his homeland Crimea exploring the fractured relationship between Ukraine and Russia. The young director is only in his mid twenties but already manages his material with confidence and maturity to create a gripping and thoughtful story about family responsibility and the ties that bind.

Mustafa (Akhtem Seitablayev) has driven to Kiev to collect the body of his son who has been killed in the war with Russia. His mission is simple, to bury Nazim in the family’s home in Crimea. But the journey will be eventful and fraught with difficulty. It will also bring him closer to his teenage son Alim (Remzi Bilyalov), who joins him on the journey.

And the two are not on great terms. Mustafa is an aggressive disciplinarian father who doesn’t pull any punches, least of all with his youngest boy. His simmering rage is partly due to the needlessness of Nazim’s death – in his eyes – marrying a non Muslim woman Olesya (Dariya Barihashvilli) he set up home in Ukraine, and clearly Mustafa was never going to approve of the match.Mustafa’s intention was to leave the family farm in Crimea to his boys so clearly his nose has been put out of joint with this marriage. To make matters worse, the two have a violent confrontation when he refuses to include Olesya in the funeral arrangements, leaving her locked in her own bathroom, oblivious to her feelings, or even her survival. This mere act displays an extraordinary disregard for his late son’s wishes, and makes a broad reference to his misogynist tendencies which will again rear their head later on. The British phrase “a bit of a Tartar” certainly comes to mind with this implacable man.

Alim has also made plans that don’t involve returning to the family farm. On the drive through Kiev he points out the university where he is studying journalism and his father remains stony-faced refusing show any interest. The journey continues with the usual checkpoints and border controls and Mustafa is truculent and surly with local officials. He then gives Alim a crash course in how to defend himself with a knife and this comes in handy later on when they are robbed, and Alim is able to gain his father’s grudging respect.

Akhtem Seitablayev manages shows us a chink of humanity in Mustafa – clearly he loves his son, and death often brings out the worst in family dynamics. Alim evidently respects his father, and is totally under his thumbl: when the boy gets a chance to swim in the river with some locals, including an attractive blond girl, Mustafa later slams down his wallet on the dinner table and suggests Alim goes his own way. This is a man who has lived by his wits and his courage and we feel a strange respect for him, and his desperation to keep the family together.

Homeward is a film that looks stunning and has that extraordinary resonance of Nuri Bilge Ceylan’s work. Anton Fursa captures the burning sunset and the bucolic pastures of the vast flat landscape with its wide dusty roads and fast flowing rivers that really evoke that sense of belonging for Mustafa and his family have fought for. MT

Ukrainian cinematographer and director Oleksandr Techynskyi grew up in the Yakutia province of North Eastern Russia where he worked as a medical assistant in a psychiatric team before leaving medicine for photo reportage in the commercial world of Vogue, Playboy and Der Spiegal. Here he transports us to the Bukovina region of the Danube Delta in his follow-up to Maidan-themed war documentary All Things Ablaze (2014). A cinema vérité portrait of nature at its most raw and pure, the locals are mere bystanders their daily banter trivialised by the stark beauty of this remote territory on the north slopes of the central Eastern Carpathians, between Romania and Ukraine.

As much a chronicle of the seasons – from autumn to spring – as an ethnographical account of survival, Delta revolves around local farmers preparing for winter and harvesting the last of the wheat, while fishermen sink their nets for the final few weeks before the river becomes icebound their surviving perch sealed in a chilly tomb. The temperature plummets and the days grow colder and bleaker.

Snow eventually falls and with it the need to slaughter livestock for food. Fortunately this takes place off screen. But death comes in human form too, and a funeral takes place on the riverbanks. Christmas for Orthodox Christians is a festive affair steeped in local traditions with its folkloric undertones linked to nature and time-held beliefs.

Dialogue is minimal and there is hardly any score save the ambient soundtrack of whirring engines, idle chatter and gentle whooshing of the water as the boats navigate their way down stream, making this a meditative and lulling experience. Cigarettes and alcohol help the locals through their arduous often gruelling daily travails. Rugged faces and gnarled hands  are testament to the hardships of working the land. The young have mostly left for the cities and the old seem to lament their passing and face the numbing coldness of the windswept terrain.

Techynskyi’s mesmerisingly camerawork lends a lustre to the rusty auburns and burnt ocres of the corn and grasses. Under his lens the water is transformed into a shuddering veil of velvet sweeping the river as far as the eye can see. Hay bails are bathed in a milky moodiness as the violet night falls softly around. By morning turquoise takes over constrasting warmly with the custard-coloured corn. A small fox runs into a trap and is hardly distinguished from the surrounding biscuity bushes as it writhes to get free. Leaden skies locked over gunmetal landscapes. Even the frost looks enchanting anointing the winter wilderness with an ethereal glow. Delta connects to the universal narrative of survival for this diminishing community where collaboration and camaraderie will always be the order of the day. MT

In Flight of a Bullet Russian documentarian Beata Bubenec offers unprecedented insight into life on a volunteer military base during the Donbass 2014 conflict in Ukraine.

This remarkable cinema vérité film is remarkable for being recorded during one single 80 minute take of her handhold camera and brings us face to face with the conflict offering a palpable sense of unease verging on terror. Bubenec gains unprecedented access to a bomb blasted bridge over a river where we witness the arrest and questioning of a Ukrainian man accused of being a separatist by hooded aggressors. We then accompany the men during a car ride to the military base where Bubenec is clearly as recognised part of the team.

Gritty and real, this is guerrilla filmmaking at its more urgent and cutting edge – nothing prepares us for what will happen next. MT 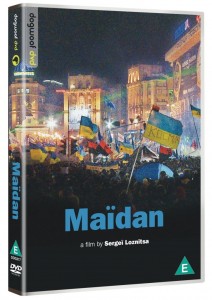 After his impressive feature films MY JOY and IN THE FOG  Sergei Loznitsa returns to documentary filmmaking with MAIDAN. Even though he captures a historical event – the removal of Ukrainian president Viktor Yanukovych from power – viewers might mistake MAIDAN for a well-directed feature, shot in the style of Eisenstein.

In November 2013 Yanukovych declined to sign an agreement for Ukraine’s associate membership with the European Union, obviously under pressure from Russia. Nationalist protesters started gathering around Maidan Square (Maidan roughly translates into “independence”). At first the mass meetings were peaceful but they escalated in January 2014 into fighting after the introduction of a law to curb the activities of the ever-growing number of protesters. Only one month later, after over hundred nationalist protesters had died, Yanukovych fled the country, leading the way to new elections. The rest is history still in the making.

MAIDAN is shot with a static camera (just one movement, caused by teargas, when the cameraman had to flee), a small number of inter-titles give sparse information, no interviews, just crowd scenes, and mostly off-screen speeches and poetry readings. Loznitsa really has taken his Eisenstein to heart: the crowd is everything. He frames their milling around; their running; the panic; the singing and the eating and drinking. The majority of them are middle-aged or even older citizens, grey is definitely the dominant hair colour. They sing anthems and other traditional songs with gusto, unashamed nationalism pores out. Somehow it feels like a delayed settlement with Russia  because these men and women must have marched in countless Stalinist rituals on the same square. Yes, their nationalism is over-the-top, the involvement of the church leaders perhaps not that appropriate, the invocation of the “Cosack” nation leaves a rather nasty taste – but at no point does Loznitsa succumb to agitation: his painterly style shows us pure emotion whatever the historical background. In his detachment, Loznitsa iis more interested in small details of the ad-hoc organisation, in near still images of people gathering to eat, creating a commune-like feeling in the first part of the documentary.

MAIDAN is, ironically, a triumph of soviet documentary style. But this is not old-fashioned, because the protesters are, for the most part, not the young angry crowd of the Arab spring and other recent uprisings but citizens whose memories go back a long time, and their anger is not just a spur of the moment, but the result of decades of Russian domination. Their cringing nationalism and the huge presence of Russians in the Ukraine, which might lead to a partition of the country, is another issue. But, in the true style of Eisenstein, Loznitsa has captured the will of the people, with all their emotional might. We should not begrudge them this moment of triumph, because they might have to pay for it with the loss of large parts of their country. AS