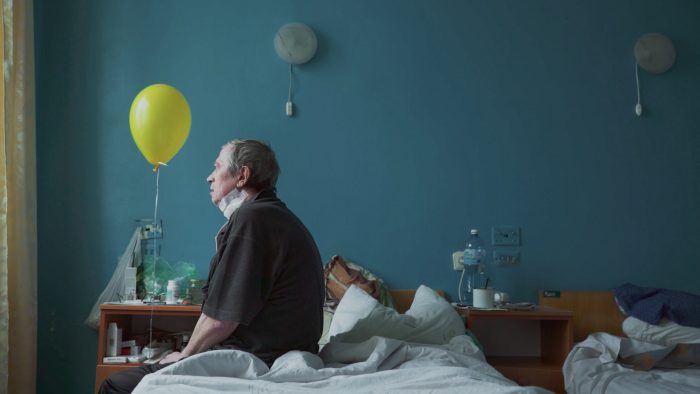 64 years is the average life expectancy for a man in Ukraine. And Valentin is heading that way. Pleasant and voluble with his twinkling eyes and broad smile, he has spent most of his working life as projectionist at Kiev’s oldest cinema the Kinopanorama, that opened in 1958.

Preoccupation with his mother has clearly dogged and dominated his personal life. A chain smoker with false teeth – at one point he’s seen popping them in and swigging the cleaning fluid – he loves to visit the dancing girls in the next door casting agency nearby the cramped flat shares with his ageing mother who is confined to bed with chronic constipation. But Valentin is not the only colourful character, in this picaresque and gently humorous debut from promising Ukrainian filmmaker Yuriy Shilov, Valentin’s neighbour Silpa is a batty lonely old man who dyes his hair and drinks himself to oblivion.

Camerawork lends a voyeuristic feel to the semi darkness of pokey place where Valentin’s friends pass by to say hello through the brightness of the open window. Kiev is seen crumbling in its former grandeur, Valentin and his pals the idiosyncratic old guard keeping the show on the road in a rapidly changing world while several widescreen panoramas reflect the sheer vastness of Ukraine’s capital city with its traditional curative baths and magnificent Dnieper River, the fourth longest in Europe

But when the Kinopanorama finally goes up in smoke one night, its clearly time for Valentin to seek pastures new and this amiable Ukrainian is very much game. MT