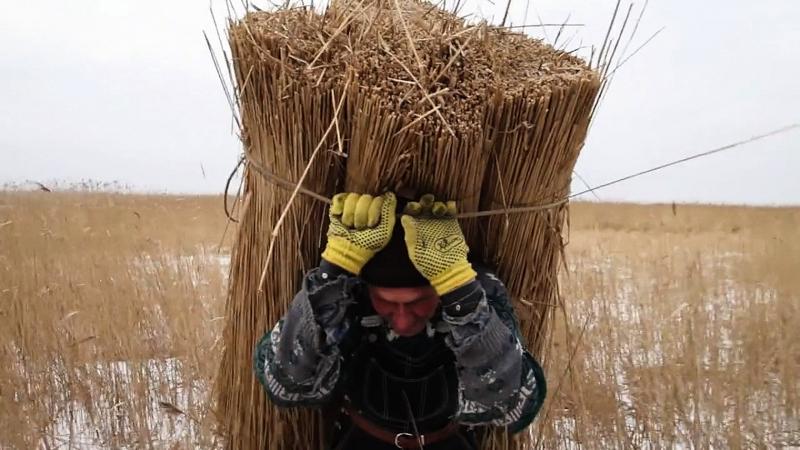 Ukrainian cinematographer and director Oleksandr Techynskyi grew up in the Yakutia province of North Eastern Russia where he worked as a medical assistant in a psychiatric team before leaving medicine for photo reportage in the commercial world of Vogue, Playboy and Der Spiegal. Here he transports us to the Bukovina region of the Danube Delta in his follow-up to Maidan-themed war documentary All Things Ablaze (2014). A cinema vérité portrait of nature at its most raw and pure, the locals are mere bystanders their daily banter trivialised by the stark beauty of this remote territory on the north slopes of the central Eastern Carpathians, between Romania and Ukraine.

As much a chronicle of the seasons – from autumn to spring – as an ethnographical account of survival, Delta revolves around local farmers preparing for winter and harvesting the last of the wheat, while fishermen sink their nets for the final few weeks before the river becomes icebound their surviving perch sealed in a chilly tomb. The temperature plummets and the days grow colder and bleaker.

Snow eventually falls and with it the need to slaughter livestock for food. Fortunately this takes place off screen. But death comes in human form too, and a funeral takes place on the riverbanks. Christmas for Orthodox Christians is a festive affair steeped in local traditions with its folkloric undertones linked to nature and time-held beliefs.

Dialogue is minimal and there is hardly any score save the ambient soundtrack of whirring engines, idle chatter and gentle whooshing of the water as the boats navigate their way down stream, making this a meditative and lulling experience. Cigarettes and alcohol help the locals through their arduous often gruelling daily travails. Rugged faces and gnarled hands  are testament to the hardships of working the land. The young have mostly left for the cities and the old seem to lament their passing and face the numbing coldness of the windswept terrain.

Techynskyi’s mesmerisingly camerawork lends a lustre to the rusty auburns and burnt ocres of the corn and grasses. Under his lens the water is transformed into a shuddering veil of velvet sweeping the river as far as the eye can see. Hay bails are bathed in a milky moodiness as the violet night falls softly around. By morning turquoise takes over constrasting warmly with the custard-coloured corn. A small fox runs into a trap and is hardly distinguished from the surrounding biscuity bushes as it writhes to get free. Leaden skies locked over gunmetal landscapes. Even the frost looks enchanting anointing the winter wilderness with an ethereal glow. Delta connects to the universal narrative of survival for this diminishing community where collaboration and camaraderie will always be the order of the day. MT