P. David Ebersole and Todd Hughes (Mansfield 66/67) look into the world of fashion icon Pierre Cardin (1922-2020) giving a real sense of who he was and how he shook things up in the early Sixties.

Cardin wasn’t just a fashion designer – he was all about futurism, transforming haute couture, watches, even sunglasses and cigarette lighters with a unique vision for the modern world in the late 1950s and 1960s. Always looking forward to the future and, crucially, maintaining control of his brand, and never selling out.

Born Pietro Costante Cardin near Treviso in summer 1922, his Italian wine merchant parents had fled to France to avoid Fascism, and Pierre grew up near St Etienne with his ten siblings, eventually drifting to Paris after the war to study architecture. Rather than designing buildings he was drawn to fashion tailoring eventually joining the Paris atelier of Paquin in 1945 where he was put to work on the fantasy costumes of Jean Cocteau’s classic Beauty and the Beast, and by 1947 he was heading up the tailleur atelier of Christian Dior. He was 25. Striking out on his own he founded the House of Cardin last three years later where his avantgarde designs focused on geometric Space age forms, rather like his fellow designer André Courrèges (1923-2016).

Ebersole and Hughes opt for a chronological structure and a punchy style of editing that pops with archive footage intercutting soundbites from Cardin’s catwalk models with collaborators from all over the world: this reflects how the designer pioneered international markets way beyond the West in a International branding furore that took  in Japan, China and Russia where he was the very first to develop an easy style of ready to wear fashions with a keen eye to the global possibilities on offer.

Cardin’s triumph was to offer women freedom after the constraints of those corsets and tight-fitting styles of the early 1950s, with bright primary colours and futuristic fabrics that were cutting edge: the “bubble dress” was a case in point, fashioned on the bias over a stiffened base. These were not elegant pieces but flirty, fun and functional, offering comfort and flexibility, they still look ultra modern even today. Apart from his global branding initiative, Cardin was also one of the first to choose models from different ethnic backgrounds such as Naomi Campbell and Hiroko Matsumoto.

But there was a price to pay for all Cardin’s maverick desire to spread his brand far and wide: in 1959 he decided to make a range of designer dresses for those with style but a shoestring budget, and  fell foul of the strict French federation of haute couture. This was seen as cheapening the designer ethos of the era – even today you will never see Chanel or Yves Saint Laurent in the sale.

Ever the enterprising innovator, Cardin moved on inexorably, branching out into new ventures such as cars, furniture and – in a musical twist – the Espace Cardin, a theatre in the former Cafe des Ambassadeurs in Paris which even featured Alice Cooper, and provided the springboard for Gerard Depardieu’s acting career.

Jean-Paul Gaultier is one of the most amusing talking heads, revealing how Cardin was turned away from Maxim’s restaurant for not wearing a tie in 1960, and duly brought the place two decades later, making it trendy and cool. In 2001 he acquired the former home of the Marquis de Sade, the Chateau Lacoste, where he ran a respected musical drama festival in the heart of the Vaucluse. 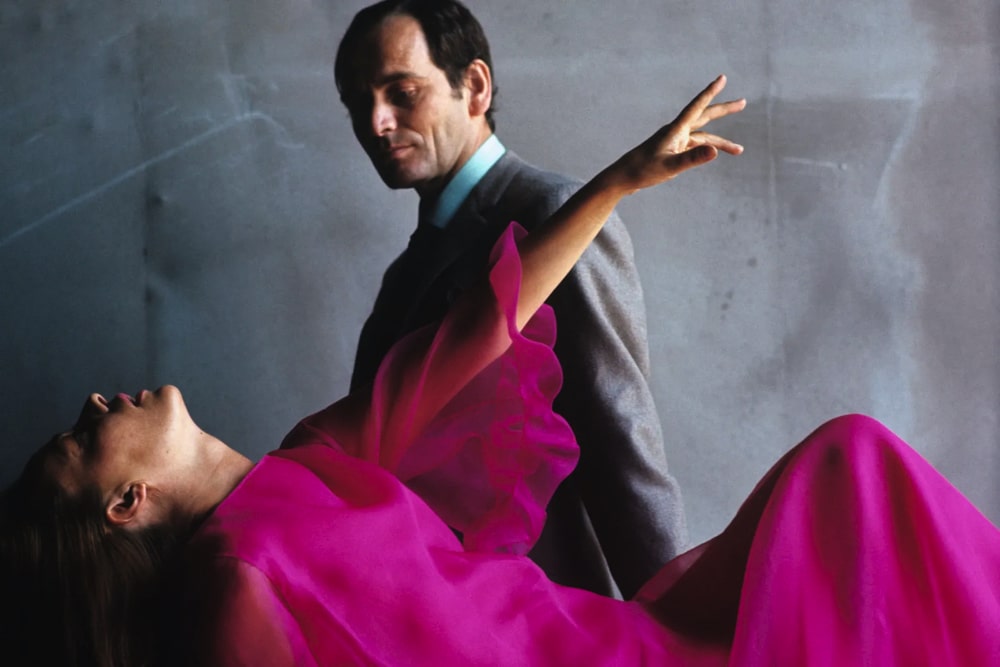 Cardin himself appears in footage as rather subversive and cheeky with a glint his eye and a ready quip: like a little boy he loved to be in the limelight, with the talent and foresight to back it all up. But we learn little of the man behind the persona, or of his love life  beyond his surface popularity as a sexual conquest – by his own admission “I was very much in demand”. Openly gay, he also enjoyed a long affair with Jeanne Moreau in the 1960s and rather like his countryman Yves Saint Laurent he later became romantically involved with his business partner Andre Oliver.  Still firing on all cylinders in his late 90s when this biopic was made, the legendary Pierre Cardin was more than just a designer, he was a major creative force to be reckoned with and is now a household name. MT

ON RELEASE FROM 26 APRIL 2021 ON MAJOR PLATFORMS