Summer of Soul (…or, When the Revolution Could Not Be Televised) (2021)

The 1969 Harlem Cultural Festival is the subject of this dynamite documentary from Ahmir ‘Questlove” Thompson ‘proudly’ showcasing that musical celebration of Black culture, fashion and history.

Back in the day – and we’re talking about the Sixties (and even the 1920s, 30, and ’40s) – everyone loved Black music, not because it was Black but because it was rhythmic, soulful and cool. But maybe that’s because I had a father who hummed, danced and played on the piano those heady tunes from Fats Waller, Louis Armstrong, Ella Fitzgerald, Billie Holliday, Charlie Parker, Count Basie, Tommy Dorsey, Duke Ellington, Artie Shaw and more.

Soul followed on in the same effervescent way, the syncopated jazz of his era becoming the sinuous and sensual soul of my student days: music from Stevie Wonder, Nina Simone, Gladys Knight, Marvyn Gaye, Mahalia Jackson and the Supremes.

Thompson revisits this darkly glamorous era in a New York concert that coincided with the much higher profile of Woodstock just down the road. Now that was my brother’s territory: The Who, Jimi Hendrix, Neil Young, Led Zeppelin, The Doors and Joni Mitchell. The Harlem affair somehow got buried under the weight of Woodstock, but why, when the music was just as fabulous – I never thought about ‘Black’ music – just music I liked…and I would been there like a shot given the opportunity…years later.

In Harlem’s Mount Morris 300,000 – mostly Black- fans gathered to enjoy a series of free ‘gigs’ and Thompson has assembled a treasure trove of archive footage that tethers the era to the present with just a smattering of talk heads that enrich rather than diminish the musical experience. MT

Regaling the time when The Beatles went mad in India – where Beatlemania was already a thing – this new musical documentary digs up some archive treasures from from an era that launched flower power and all things surreal and psychedelic.

The title sequence kicks off with Rammi Kapoor doing his stuff accompanied by India’s equivalent band the Savages and a motley crew of exotic dancers in Bhappi Sonie’s 1965 film Janwar. We then cut back to archive footage of a bomb-struck Liverpool where the boys recall their how grim it was back then in England – has anything changed – and confirming that the grass is always greener when you venture to pastures new. As they did.

The Beatle story has already been rung dry of new juice but somehow Ajoy Bose and his co-director Peter Compton switch stuff around to make this fun and entertaining, and a tribute to how four young guys electrified the youth of their day, who up to then looked and acted pretty much as their parents had done until this zippy injection of counterculture ushered in the Swinging Sixties.

And the band’s massive success certainly did its bit in turning the spotlight on India  which until then had never registered in the collective consciousness of the west (could they now please do something for climate change?).

Of course, George Harrison will always go down in history as being the most adventurous Beatle beating a path to India to take sitar lessons from Ravi Shankar in 1966. The others followed in 1968 captivated by the idiosyncratic sitar music and its history and transformational powers, and this is the thrust of this new film with its fascinating talking heads recalling their own memories of the band’s visit from the Indian perspective. MT

This documentary of the Newport Jazz Festival that took place at Freebody Park, Newport, Rhode Island in July 1958 is the only directional credit of fashion photographer Bert Stern; also one of three credited cameramen of Jazz. (His co-director Aram Avakian is best known for helming End of the Road (1970), which got a X-rating for showing an abortion).

Jazz is a lively interactive blast from the past, the crowd are major players in an event that captures the heady atmosphere of a free-wheeling and jubilant world on the cusp of the 1960s: the best was yet to come in this brave and promising new era. Of course, behind the scenes Behind Vietnam was raging and the filmmakers make a conscious decision not to include the mayhem caused by an influx of black citizens into the luxury enclave of Rhode Island. But they are big players as musicians and onlookers enjoying the pleasant July seaside resort. 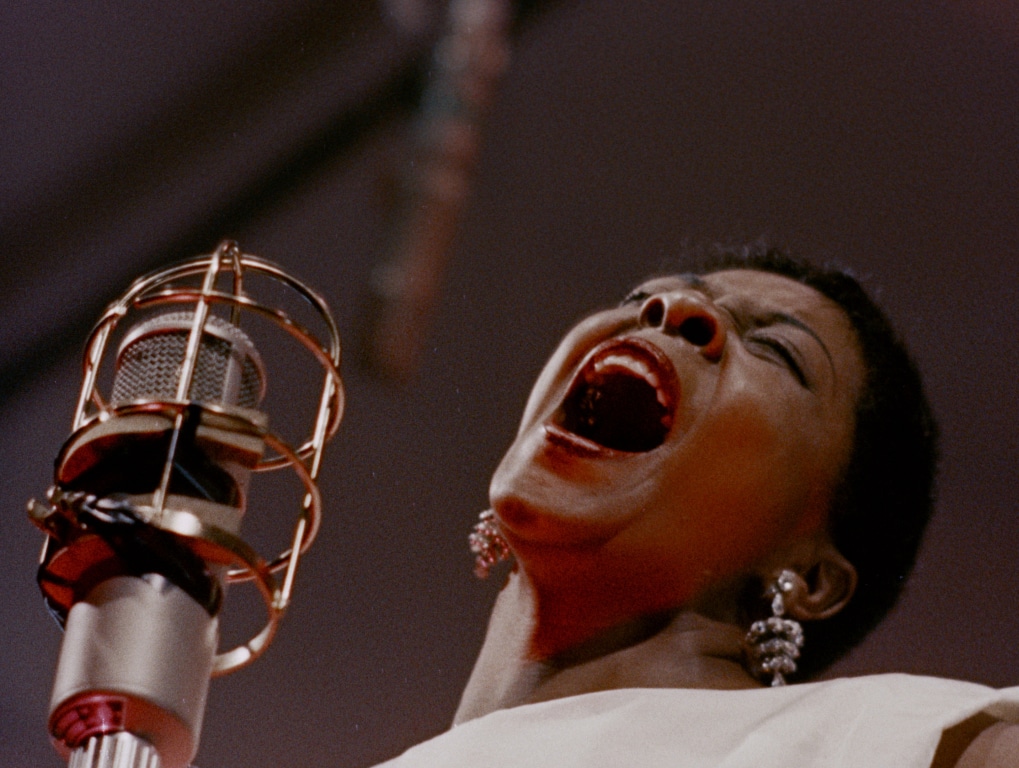 The music is very mainstream, even by standards of the late 1950s. Looking at the list of omissions by the filmmakers – Miles Davis, John Coltrane, Duke Ellington with his band, and Mary Lou Williams – it becomes clear Jazz was meant to appeal to the widest audience possible. Still, it works, mainly because the lack if commentary, just the voice of emcee Willis Connover. The directors drift around the harbour too where yachts were competed in trials for the ‘America Cup’, adding a salty maritime edge to the sultry Southern singers. Their camera catches the Hamilton Quintet rehearsing in a nearby house, after which cellist Nathan Gershman plays Bach’s Cello Suite number one – just for himself.

Having said all this, there is a towering cast of musicians, dominated by female artists – Louis Armstrong (joyful as ever) and his “All Stars”, Anita O’Day (Sweet Georgia Brown), Dinah Washington (All of Me), R&B star Big Maybelle and Mahalia Jackson. At the beginning we get only a short glance of Theolonious Monk, playing “Blue Monk” with his trio, totally immersed in playing the piano, oblivious to what was going on around him. Chuck Berry enjoyed great applause for his version of “Sweet little sixteen”, even though it was originally a rock hit. But the night belonged to Mahalia Jackson, whose “The Lord’s Prayer” ran into Sunday morning. 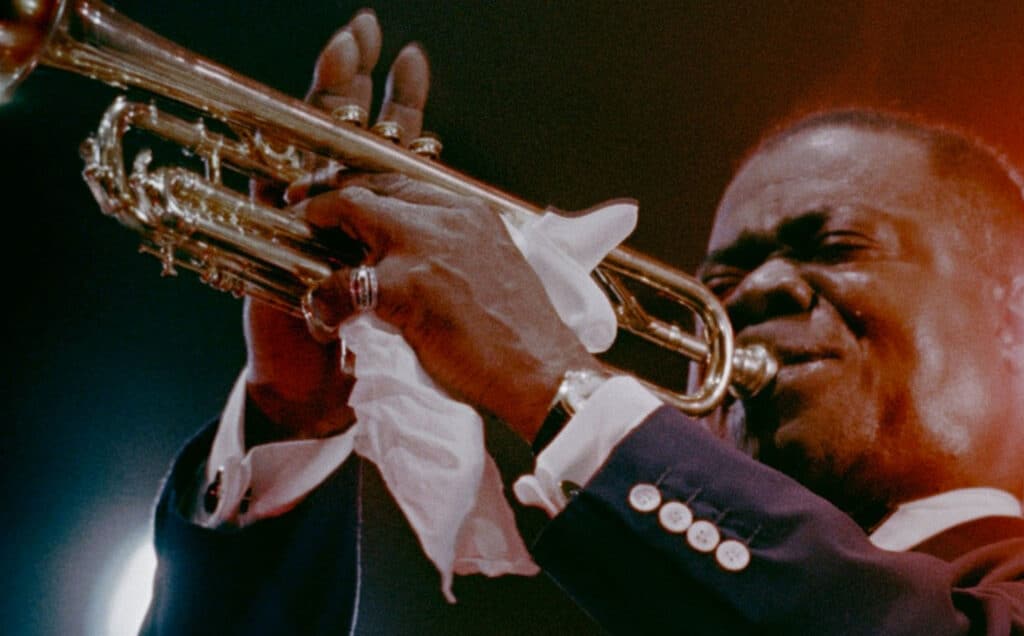 The audience is shown intimately, not just a decorative backdrop, but a real participant. Some are serious devotees, others have brought their children and even babies to boogie along. A vicar and fan with his own 8mm camera are also on show. The consensus was to give the impression of a united nation, helped along by a decade of affluence. But the undocumented police interference was a sign of things to come. The near future would bring the murders of John F. Kennedy, his brother Bobby and the slaying of Martin Luther King amongst a growing Civil Rights movement. So looking back Newport 1958 appeared like a beacon of hope, in a world now lost for ever. We are left wondering how many of the earnest young citizens went on to the streets in the 1960s, protesting against the Vietnam War.

The film was shown at the Venice Film Festival in 1959 and the restored copy is much more than a Jazz documentary: A snapshot of a nation just before major turmoil would jumble the pieces leaving nothing in its place any more. Only the jazz survived. AS