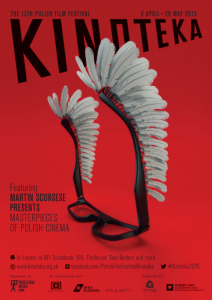 KINOTEKA, the annual celebration of Polish Cinema and culture, is back in London for the 13th Anniversary. Taking place in various venues including BFI Southbank, ICA, Tate Modern, Fronline Club and Filmhouse Edinburgh.

Here’s a taster of this year’s highlights:

Opening with a screening of CAMOUFLAGE with director Krzysztof Zanussi as special guest, KINOTEKA honours the work of Zanussi with 3 titles in the Masterpieces of Polish Cinema season: CAMOUFLAGE, THE CONSTANT FACTOR and ILLUMINATION as well as the UK premiere of his latest film, FOREIGN BODY  in the New Polish Cinema section.

The ICA plays host to KINOTEKA’s New Polish Cinema strand from 10th April with a selection of popular and critically successful contemporary Polish films from the last year. Krzysztof Zanussi’s FOREIGN BODY, takes an uncompromising look at contemporary Poland and the struggles between capitalist reality and Catholicism, sin and sainthood, men and women. Jerzy Stuhr’s latest film, CITIZEN, a dramedy set over sixty years, tells the story of Jan Bratek who regretfully finds himself at the heart of events from the modern history of Poland, from the 1950s through to the present day.

Wojciech Smarzowski ‘s (TRAFFIC DEPARTMENT), THE MIGHTY ANGEL, is in many ways Poland’s answer to The Lost Weekend and Leaving Las Vegas. An uncompromising, naturalistic tale of addiction and redemption, Robert Więckiewicz stars as a writer hospitalised for his alcoholism and the film follows him and the patients he meets during his treatment.

Krzysztof Skonieczny’s HARDKOR DISKO, hails the arrival of a fresh voice in Polish Cinema, his incendiary, psychological thriller wowed audiences when it premiered at last year’s Edinburgh Film Festival. When a young man arrives in the city and makes his way to the door of a successful middle-aged couple, his motives for being there are unclear. What quickly becomes apparent is that his overriding desire is to kill them. Compelling and disturbing, Hardkor Disko has elements of Michael Hanneke’s Funny Games.

KINOTEKA showcases original, innovative documentary from Poland. Paweł Pawlikowski is primarily known in the UK for his critically acclaimed feature films, including the BAFTA-winning LAST RESORT, MY SUMMER OF LOVE and most recently the Oscar® winning IDA. He began his career in television making documentaries for the BBC, where his distinctive mixing of fact with elements of the personal and poetic challenged expectations of the television documentary format. Paweł Pawlikowski will present a special weekend of screenings at the ICA (18th/19th April), including DOSTOEVSKY’S TRAVELS about the Russian novelist’s journey to Western Europe in the early 1990s, his great grandson Dimitri makes the same journey, travelling from St Petersburg to Berlin and London to lecture about his great grandfather. Dimitri’s sole ambition is to earn enough money to buy a Mercedes. Blending real and fictional events, Pawlikowski’s film reflects on one of the pivotal moments in modern history: the fall of the Berlin Wall; ruminating on the collapse of the Soviet Union and Russia’s transition to capitalism.

In a short career before his premature death at the age of 34, influential documentarian Wojciech Wiszniewski (1946-1981) produced just 12 films in total, yet he is now considered to be one of the most outstanding personalities of his generation. Known for his cutting edge and pioneering approach, his work broke conventions by employing bold techniques of framing, distorting sound and an associative use of editing to orchestrate or create a reality. His legacy is explored in Wojciech Wiszniewski Rediscovered, a programme of 6 of his shorts at the ICA on 12th April.

The documentary strand also celebrates the work of emerging Polish documentary filmmakers. Both Aneta Kopacz and Tomasz Śliwiński who studied at the Wajda Film School have been Oscar® nominated for this year’s Best Documentary Short Film category. Aneta Kopacz’s JOANNA is a tender portrait of a woman with terminal cancer and her attempts to prepare her young family for a world without her in it. Shot by Łukasz Żal, the talented young Polish cinematographer who is also Oscar® nominated for Ida, Joanna is a story of strength in the face of adversity. Tomasz Śliwiński’s OUR CURSE, is a personal statement by the director and his wife, the parents of a baby boy born with a rare and incurable disease. The film forms part of their process of coming to terms with his diagnosis.This year KINOTEKA will draw to a close with a special screening of cult Polish comedy THE CRUISE (1970) at the ICA (29th May), to mark Second Run’s DVD release.