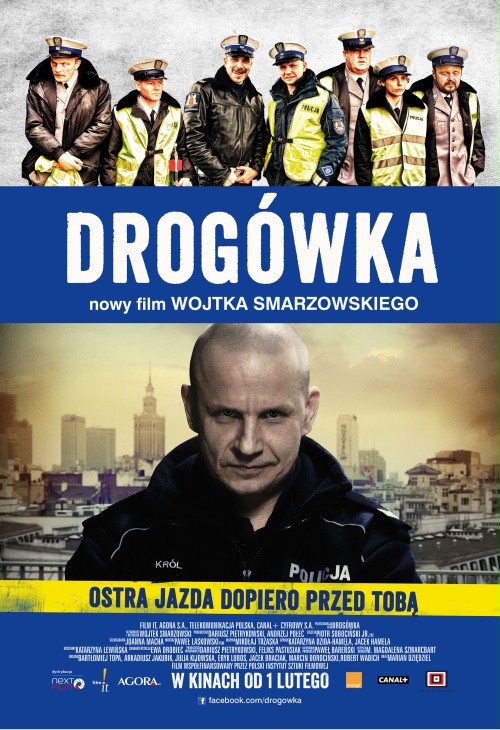 Wojiech Smarzowski (The Dark House) is arguably the most sought after director in contemporary Poland. TRAFFIC DEPARTMENT  feels like a Polish version of ‘The Wire’, surging forward at a breathless tempo. Bartlomiej Topa plays Ryszard Krol, one of seven friends who serve as traffic cops in Warsaw’s police force. They take bribes, have sex whenever possible and never seem to sleep. Krol is having a steamy affair with his colleague Madecka (Julia Kijowska), but when he finds out by accidence, that his wife is having her own extramarital affair with his friend and colleague Lisowski (Marcin Dorocinski), he goes berserk. After a drunken bender, he ends up in a brothel where he looses consciousness. He wakes up the next morning beaten-up in his car, Lisowski has been murdered during the night and traces of his blood are  found in Krol’s car by the police, during routine inquiries.

Krol and his corrupt officer friends race through the action, even before Krol is forced on the run, the narrative feels frenzied and venal. This is a hard-edged thriller and we are not spared gruesome details of traffic accidents; visits to sordid, but expensive brothels, in contrast to the squalid flats occupied by the officers and their families – not an excuse, but perhaps a reason for their immoral earnings. In spite of the serious tone – contemporary Poland is shown as an ugly cess pit – the director always finds a way for subversive, dark humour: when officer Petrycki, who is always getting freebees from whores, is getting a blow-job in the back of a car driven by Krol, the latter has to brake sharply to avoid running over a group of nuns on a zebra crossing, causing the prostitute to take a mighty bite out of Petrycki’s organ, landing him in the nearest A&E.

Whilst the camera excels in the dominating action sequences, we are drip-fed with little details, that explain the motives of main characters. The light is diffuse at daytime, but most of the film is shot at dusk and dawn, giving the film a noirish element. Editing leaves us with very few calm moments, only when interacting with his football mad son, Krol seems to take a breather. Traffic Department is a butch thriller with muscular, spontaneous performances from all concerned; even the women. It does look like Smarzowski used mostly first takes, adding an authentic feel. Whilst not re-inventing the “wrong man” scenario, Smarzowksi has shown enough bravado to put his own stamp on the genre. AS