Echoes of the Past is a wartime drama dedicated to Max von Sydow in his final role of a stunning career. Sadly, Nicolas Dimitropoulos and his scriptwriter Dimitrios Katsantonis have made rather a mess of their attempt to fictionalise the 1943 Kalaryta massacre where 752 Greek civilians lost their lives at the hands of German troops, in the northern Peloponnese.

Alexis Andreou (Papagiannis) is a member of the Greek partisans fighting the occupying German forces. After some of them are killed, General Le Suire (Arana) asks commandant Tenner (Laer) to shoot all male inhabitants of the town and burn the women and children in the school house. Tenner, whose father deserted in WWI, is only too willing to follow orders, but Austrian private Friedrich Braun (Aleiferopoulos) single-handedly saves the lives of the women and children involved.

The two strands, past and present, unfold in parallel: German government lawyer Caroline Martin (Roos) is trying to avoid making reparations for the massacre, proud at having never lost a case. She visits Kalavryta and meets the only survivor, writer Nicholas Andreou, on his last legs. Out of the blue Martin then resigns, claiming the payout should go ahead. But not before she pays a ‘tea and sympathy’ visit to private Braun’s widow Frau Voss (Krige) in Thal, Austria, proving there to be one good German and one good Austrian in this war crime saga.

DoP Yorgos Rahmatoulin’s images are as uninspired as script and direction, Echoes hovers between sensationalist hyper-realism and soppiness ultimately lacking the gravitas to do justice to such a momentous episode in history. AS

This medieval parable based on a true story feels utterly up to date with its modern rape-revenge theme told from three perspectives: a savvy noblewoman, her pompous husband and the silver-tongued ‘Squire’ who rapes her. Ridley’s Scott’s latest is a magnificently mounted and gory epic, crowned by a string of charismatic performances: Jodie Comer is Marquerite de Carrouges, Matt Damon her husband Sir Jean, and Adam Driver. the squire, Jacques Le Gris. Ben Alffleck is dynamite as his close friend and ally Count Pierre d’Alencon, rocking a saucy blond wig; Alex Lawther plays a mincing King Charles VI. Strange accents are the order of the day – Laurence Olivier would turn in his grave.

Back in the 14th century chivalry was a big thing. And men took their gallantry seriously, and were even prepared to stake their lives on it. Women were merely impotent bystanders in this honour-bound society, and that’s – to an extent – the only flaw in the rape-centred story. Co-writer Nicole Holofcener (Gladiator) serves up revenge from a female point of view primped with contemporary credentials, showing that a woman’s mental resolve can be just as strong as the sword when her own honour is called into question.

Freighted by the gravity of its subject matter, The Last Duel bristles with intrigue from start to finish, a gripping crowd-pleaser that wears its ethical and moral emblems proudly on its 14th-century sleeve. Ridley Scott jostles us through the early part of his film establishing the milieu of brutal battlefield set-pieces finally getting down to business with the crux of the narrative: land-ownership and property in 1386. Norman knight Carrouges is locked in a bitter dispute with his nemesis Le Gris over parcels of land and military preferment. But when his wife Marguerite accuses Le Gris of rape, the feud turns murderous, Carrouges asking King Charles VI for the right to challenge his enemy to a duel.

Based on Eric Jager’s bestseller: The Last Duel: A True Story of Trial By Combat in Medieval France, the macho premise morphs into a female-centric tale reflecting on the putative assault from the three different angles, growing more persuasive as they pass from assailant to victim.

Once again Jodie Comer is the star of the show even through she only grabs part of the screen time from the macho male contingent  in a lavish and entertaining Hollywood style arthouse action drama. MT

MARY QUEEN OF SCOTS is the second film this year that deals with the complicated lives of women in power. In Yorgos Lanthimos’s sassy black comedy Queen Anne falls under the spell of her two female courtiers but manages to prevail despite her reduced mental and physical circumstances. Josie Rourke’s toys convincingly with the truth in her spectacular but sensitive drama that explores the thorny relationship between two 16th century Queens at opposite ends of the British Islands – Mary in Scotland and Elizabeth in Southern England. In some ways these show how women at the top can be lionised and then swiftly victimised: all three female monarchs are highly intelligent and intuitive but they are also totally alone, and crucially vulnerable because of their gender. And the salient fact that emerges in both these films is that regal women – or any female leaders for that matter – are betrayed by their own kind – and not just their menfolk – in their fight to prevail (‘wise men wasted on the whims of women’). 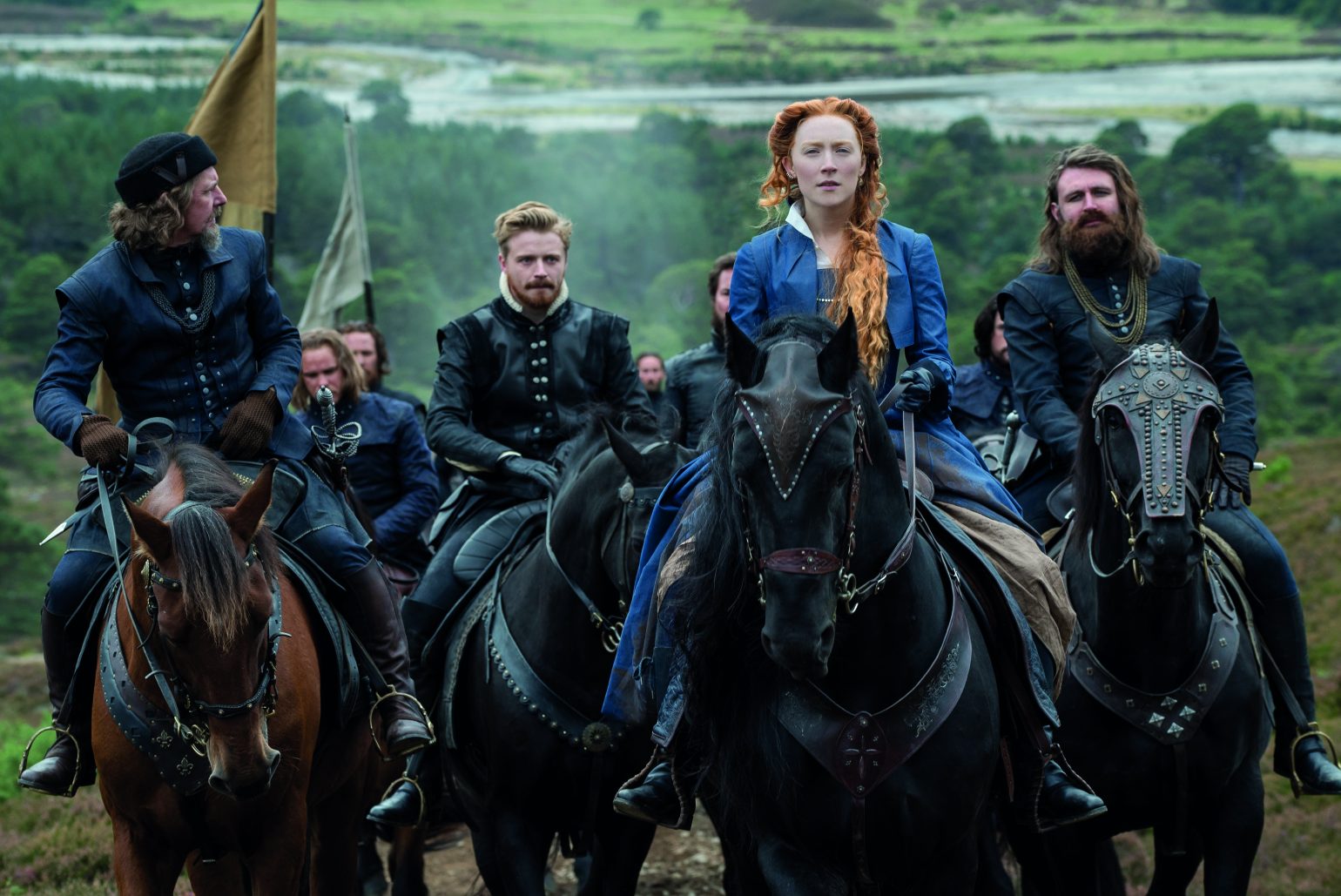 As director of the Donmar Warehouse Lisa Rourke’s approach is theatrical and exquisitely visual in her screen debut. This is a lavishly mounted and magnificent saga that straddles the majestic Scottish landscape and also the lush intimacy of the interior scenes. The 16th century is seen from a uniquely feminine focus. And Rourke appreciates the sensibilities in question that only a woman could appreciate: the great sadness at the heart of Elizabeth I is her inability to procreate and this makes her a vulnerable character with a fatal flaw, despite her abiding strength of character and acute intelligence. Power for women in that era lay in their fertility and also their fecundity. And Mary is fully aware of this and uses her biology to get the better of Elizabeth, at least for a while. And when they finally meet, in a dreamlike scene where gossamer curtains continually conceal Elizabeth from her rival, the meeting is not confrontational but essentially full of regret and commiseration – although neither backs down from their position of residual power. Beau Willimon (Netflix) brings his unique brand of TV theatricals to the party with behind the scenes skulduggery.

The film opens as the 18-year-old widowed and still virgin Mary (Ronan) returns to Scottish shores after a sexless marriage to François – who was apparently too scared to perform his manly duties. Her half- brother (James McArdle) is temporarily on the throne, and not ecstatic to see her, for obvious reasons, and Protestant cleric John Knox (Tennant) is highly vocal in his dislike of her. Her Catholicism is the divisive factor, as is her unwillingness to stroke male egos (“one moment does not make a man”). Her cousin and rival Elizabeth (a regal Margot Robbie) is also unhappy to have her back in Britain, as she is a rightful heir to the throne and Elizabeth is childless, but concedes that Mary will come next. But those around them are not happy about the possible outcomes, and their scheming sets in motion a series of events that are now ‘history’.

Rourke and Willimon’s subtly salacious backdrop to the intrigue makes this neatly condensed historical thriller compelling but also highly plausible. And Rourke keeps the tension mounting and the pace tight throughout in her masterful first feature. There are no long monologues or endless pontifications – and she deftly dovetails the various plot-lines together while stitching sensually intimate scenes into the narrative and also staging short-lived but spectacular battle scenes. Costumes and hairstyles feel both ancient and edgily Avantgarde. And a sexual frisson seems to sizzle throughout the entire cast. 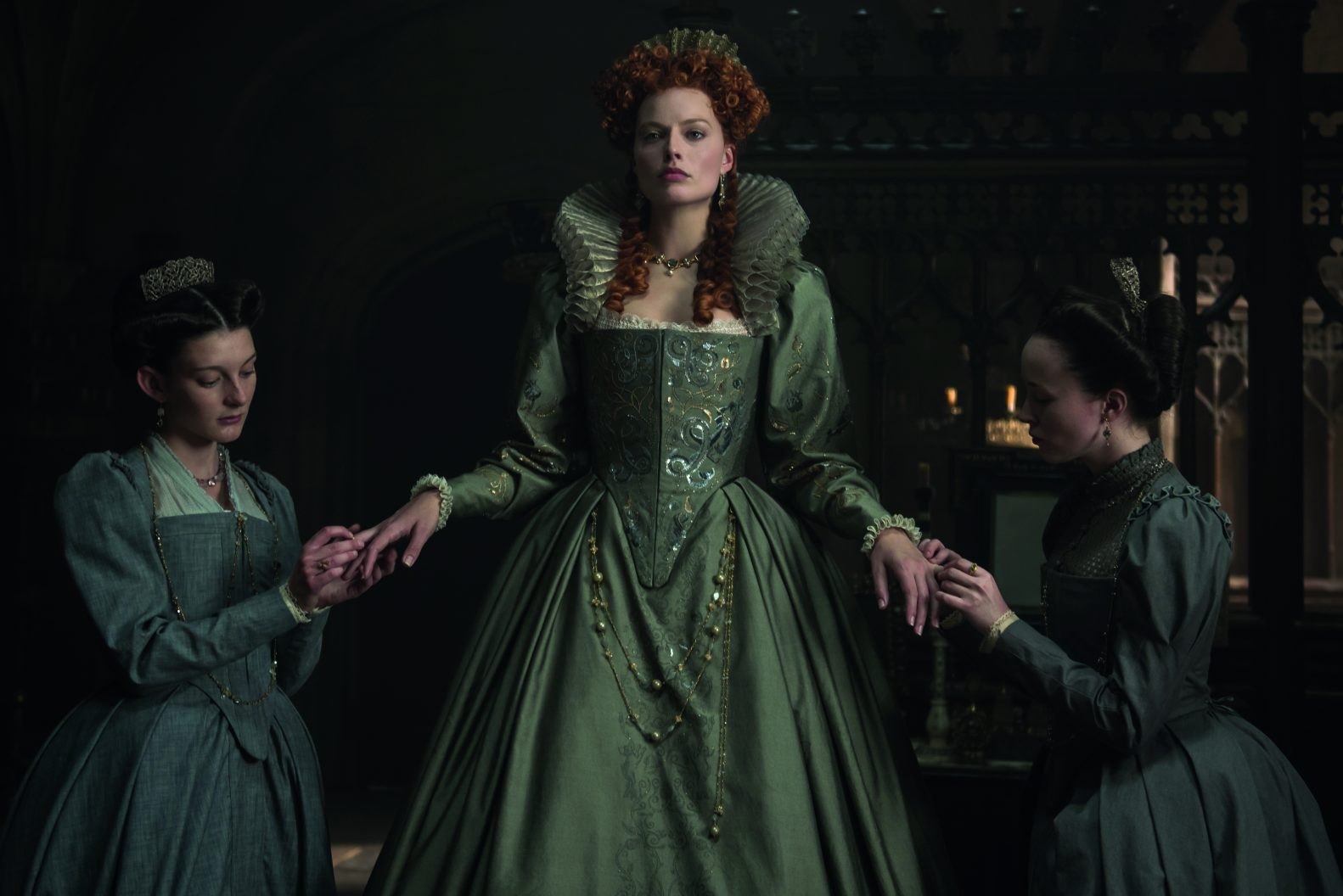 Obviously there will be bleats from historical purists, but this is an imagined drama not an historical recreation. As Mary, Ronan feels perfectly cast and polished, her porcelain prettiness suffused with ethereal delicacy, and yet she is resolute and pragmatic to the last. After being seduced by Darnley’s charm – hardly surprising given that her smouldering libido has been unquenched by a sexless short marriage – she quickly susses him out to be a bisexual airhead with feet of clay and an eye to the main chance – but realises she must also bear a child by him – as soon as possible. She also fathoms out the way to do this is through domination, and he responds.

Meanwhile, Elizabeth gets a dose of small pox – transforming Robbie from a regal stunner to a dried-up crone – but still radiates an inner strength and an outer vulnerability which brings out the Queen’s thoughtful introspection and her deep regret at having to be “a man”. And the final scene sees her holding her own, despite Mary’s persistence as a Stuart. This is a finely-tuned but mesmerising arthouse drama that manages its modern viewpoint without losing site of its elegant antiquity. MT