Silent Night is one of those plucky B-Pictures, with lots of ideas – not always fully realised – and a surreal plot. In this case the setting is in an English country mansion where friends from school and university are celebrating a time of “love and forgiveness”. But they will have to make the most of their get together because – according to News reports,  a poisonous gas will soon engulf the planet exterminating everything alive. The government is giving out ‘Exit-pills’, to relieve the suffering – sounds familiar, eh?

The hosts, Nell (Knightley) and Simon (Goode) are in charge of catering, their son Art (Roman Griffin Davis) cuts himself slicing the carrots. As it turns out, he’ll be in the minority, not wanting to accept the need for the government prescribed pill. Art’s twin brothers Hardy and Thomas (Hardy and Gilby Griffin Davies) are nowhere to be seen, but go with the flow making life for their parents easier. Then the guest roll in two by two, creating a reverse Noah’s Ark effect. Sandra (Wallis) self-centred and attention seeking with hubby Tony (Jones), candidate for ‘Mediocre Man’ of the universe and daughter Kitty (McKenzie), as unbearable as her mother.

Lesbian couple Bella (Punch) and Alex (Howell-Baptiste) are here to enjoy themselves, laid-back medic James (Dirisu) has issues with much his younger partner Sophie (Depp), an American, who is pregnant and joins Art in defiance.
Nell and Simon are proper hosts, trying to cater to everyone’s whim – whilst fighting a losing battle with Art, who will run off deep into the night where he will come across a car packed with the bodies of neighbours who have taken the pills, something Art wants to avoid at all cost.

As the hour of ‘no return’ creeps nearer, James wins the battle of wills with Sophie, whilst Sandra and Tony also make peace just in time, giving their daughter a peaceful exit. But Bella has big problems with Alex who gets so drunk she passes out. Bella administers the pill to her sleeping lover who wakes up and vomits the pill out. Alone in the kitchen with Alex Bella has to come up with a radical solution.- everyone else has retreated to their bedrooms, including Art who is asleep in his mother’s arms, the twins keeping up their personal rivalry to the bitter end.

There are simply too many characters here to given them a convincing backstory and make us feel for their desperate plight, although the leads – especially Knightley and Goode are impressive, and Art, the director’s son and his real life brothers Thomas and Hardy – give the cowardly grown-ups a run for their money.

Simon’s sermon to his children “It’s not our fault, nor is it yours”, rings very hollow but DoP Sam Renton makes the best out of the glittering claustrophobia of the domestic settings and the group interactions are entertaining particularly the hilarious scene where the adults discuss who slept with whom and why at university. A major twist at the end makes us forget some of the shortcomings – it may not totally win you over, but lovers of the bizarre are well served. AS

Best known for his acting roles in Inside Man: Most Wanted and Parallel, Aml Ameen directs and stars in this Christmas cracker based on his own experiences in the Caribbean community in London. where black people are for once neither victims or perpetrators, just full of issues and contradictions just like everyone else.

Melvin (Ameen) is a successful author in the US and wants to take highflying girl friend Lisa (King) to London for Christmas, and introduce her to his Caribbean clan. Things will go disastrously wrong: to start with, Lisa is pregnant, but has not yet told Melvin, who has already told her he’s not ready to be a father. Melvin’s Mum Shirley (Jean-Baptiste), rules the roost and soon finds out Lisa’s secret, but has enough problems with her own new partner Dave (Aherne) who will meet the family for the first time over the holidays which would be no big deal, apart from the fact that he is white.

Melvin’s father Billy (James) is not much of a role model having left Shirley and the kids, like many men of his generation, and now runs a night club. He has ‘forgotten’ to tell Lisa that he has left London years’ ago without keeping up contact with the family, apart from a few postcards. And while the teenage generation of the clan is as wild and violent as Melvin’s own age group at the time, countless aunts and uncles are waiting with baited breath to meet Lisa, who is, needless to say, is just another outsider, due to her Afro-American background, charms everyone with her put-on Jamaican accent. But Melvin still seems to have feelings for his ex Georgia (Pinnock, from “Little Mix”), who is now a super star and planning to take up a job in New Zealand, Lisa spying the couple sharing a cheeky covert kiss in the garden.

Ameen skates over the identity politics with panache, never losing the light-hearted sense of humour. The cast is ready to rumble, particularly Jean-Batiste as Shirley, trying to align all the contradictory bits of family life into a Hollywood style happy-ending in a referential bow to Hollywood musicals of the mid 20th century. A cocktail of festive fun and games laced with a few home truths . AS 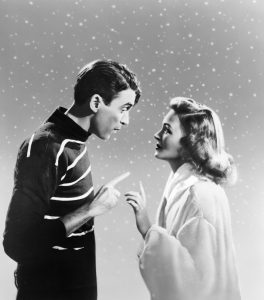 Director/co-writer Frank Capra wanted foremost “to combat atheism” when he filmed Philip Van Doren’s 1939 novella The Greatest Gift in 1946. Later he acknowledged “the feature developed a life of its own”, becoming everyone’s favourite Christmas movie since about 1976. But on its release, critics were rather unkind – on top of it, RKO lost half a million dollars at the box office. Bosley Crowther of the NYT wrote: “the weakness of this picture is the sentimentality of it—its illusory concept of life. Mr. Capra’s nice people are charming, his smalltown is a beguiling place, and his pattern for solving problems is most optimistic and facile. But somehow, they all resemble theatrical attitudes, rather than average realities.”

Nevertheless Frank Capra’s films always have a basis in reality and a moral tale to tell and despite the schmaltz, the reason this film is so universally popular, especially during the holiday season it that it endorses the important facts of life that we know are worth remembering: Don’t give up; Appreciate what you have – you could lose it, and loved-ones are more important that material riches (yes, this is a difficult one!)

In the small town of Bedford Falls George Baily (Stewart) lives with his wife Mary (Reed) and their three children. George not only saved his brother Harry from drowning as a child, he also worked hard for the community and has spent his entire life sacrifices himself for others in a job he’s never enjoyed doing. But it’s only when he nearly loses his life, that he really learns to appreciate again.

As usual, the eventual cast was a long way from the original proposals: Before Stewart, Henry Fonda and Cary Grant where considered to play George, whilst Jean Arthur and Ginger Rogers were also in the running before Donna Reed got the part. In her autobiography Rogers wrote her refusal of the Mary role might be “foolish, you say?”

On the 89 acre set of the RKO ranch in Encino, dogs, cats and pigeons roamed freely. The Main Street was 300 yards long, the equivalent of three city blocks. At the Oscars in 1946, William Whyler’s The Best Years of Our Lives swept the board, winning Best Picture (Samuel Goldwyn), Best Director for Whyler, Best Actor for Fredrick March and Best Editor for William Hornbeck.

It’s a Wonderful Life won in the technical category, due to the success of Russell Shearman. who invented a new method to produce artificial snow. Until then, this ‘snow’ consisted of cornflakes, coloured in white. But the crunching noise of the actors walking on the flakes, made re-dubbing of these scenes necessary. Shearman used water, soap flakes, foamite and sugar, to save the re-dubbing. DoPs were Capra regular Joseph Walker and the (then) very young Joseph Biroc, who finished his long and outstanding career for Wim Wenders’ Hammett in 1982.

The last word should go to the FBI who wrote a memo after the premiere along these lines: “With regard to the picture It’s a Wonderful Life, the film represented rather obvious attempts to discredit bankers by casting Lionel Barrymore as a ‘scrooge-type’ so that he would be the most hated man in the picture. This, according to sources, is a common trick used by Communists”. Indeed. AS

NATIONWIDE and all over Europe from 30 November 2018