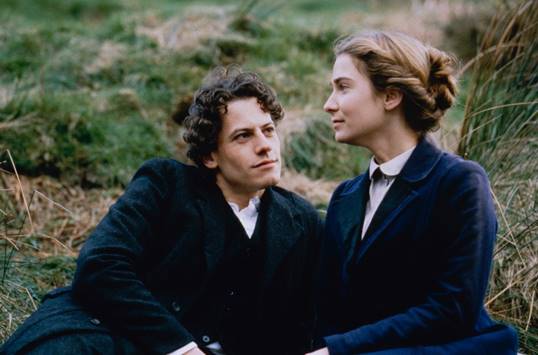 This Welsh/Jewish version of Romeo & Juliet fails to generate any heat despite fresh performances from its dynamic central duo. It went on to be the British hopeful for Best Foreign Language Oscar in 2000, but came home empty-handed.

In turn of the century Wales during an upswell of anti-semitism, largely caused by social discontent in a small community dependent on coal-mining, Welsh Christian Gaenor (Roberts) and Orthodox Jewish Solomon (Gruffudd) meet face to face when he rings her bell as a door to door salesman. His family also own the local pawnshop making Solomon’s religious affiliations seem evident. But we are led to believe Gaenor has not cottoned on to his religious persuasion and they subsequently fall for one another in coup de foudre culminating in a barn. Clearly Solomon is far less experienced than Gaenor, who is not just a church-goer, as she comments: “you’re different from other men, and different down there”. She doesn’t twig why he is different, or even think to ask. But their onscreen chemistry is convincing and heartfelt.

But Solomon – or Sam – is still keeping his light under a bushel in this dangerous game of love. The lengths he goes to conceal his Jewishness and his refusal to accept the ultimate impact of his lie on his love for Gaenor is the crux of this rather grimly-mounted drama. Sam remains a tortured soul throughout particularly when he discovers her pregnancy. But although Morrison is even-handed in his portrayal of Jewish and Welsh hostility to one another, this element is underwritten and takes a backseat to the couple’s love story that relies on romantic cliches and narrative contrivances, leading to a ludicrously melodramatic finale.

Not what Shakespeare would have hoped for, and certainly not what Zeffirelli achieved in his far superlative 1968 original with Olivia Hussey and Leonard Whiting. First time filmmaker Paul Morrison went on to make the more successful Wondrous Oblivion four years later, but lacked the experience to set the night on fire with this predictably maudlin Shakespeare re-imagining. MT