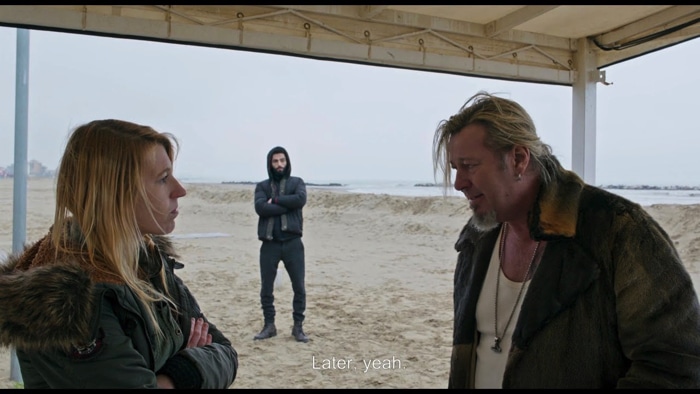 Rimini is a comedy of the most tragic kind. Accurately reflecting the tawdry reality of life in a washed-out seaside town in winter where lost souls come together disillusioned by lives that turned out to be shadows of their hopes and dreams it pictures the sleety coalface of the 21st century as it really is for many, warts and all.

Fans of Austrian auteur Ullrich Seidl will welcome another addition to the archive. Rimini is less horrific than his gruesome Safari. More long the lines of Paradise: Faith, and Paradise: Love this latest is less poetic, infinitely more grotesque and quietly brilliant in its acute observations. A muted colour palette and exquisite compositions offer some visual redemption but for the most part Rimini is a heart-sinking film to watch.

The first and only laugh comes near the beginning when the main character, ageing nightclub singer Richie Bravo (Thomas), swaggers back home to Austria from his squallid apartment in Rimini to attend his mother’s funeral, during which his dementia-ridden father (beautifully played by Hans-Michael Rehberg) shouts out “who’s dead?” It’s an all too familiar situation for many and Rehberg (who died in 2017 shortly after filming) will also provide the film with its devastating finale that conveys the pity and poetry of this ghastly yet deeply affecting drama.

But when Richie later beds down in his single-bedded teenage room after the funeral, the sad truth emerges: his life has never really moved on from leaving home, to a failed relationship that inadvertently bore him a neglected daughter Tessa (Tessa Göttlicher). But more of that later.

Off-season Rimini is a tacky retirement backwater where the raddled paunchy figure of Richie Bravo returns. After the sobering events of the funeral, his sweaty leather trousers and bleach-blond looks still seem to cut the mustard with the budget crown of Austrian/German holidaymakers who are prepared to pay for a few awkward ‘senior’ moments between the sheets, despite the usual sexual accoutrements,  although passion has long left the bedroom for both parties.

The louche lounge lizard zips himself up and heads back for another grotesque stage appearance eking out strident cover versions from the past. And then home to confront Tessa who has suddenly fetched up in Rimini to reveal her pregnancy with a Muslim refugee (Isiktas) and is demanding bed and board along with his entourage of religiously observant pals. Tessa’s indomitable appearance provides the touchstone to reality that will bring Richie full circle to the present and a future of deeply-felt pain and financial hardship that will lead to his descent into venality. MT