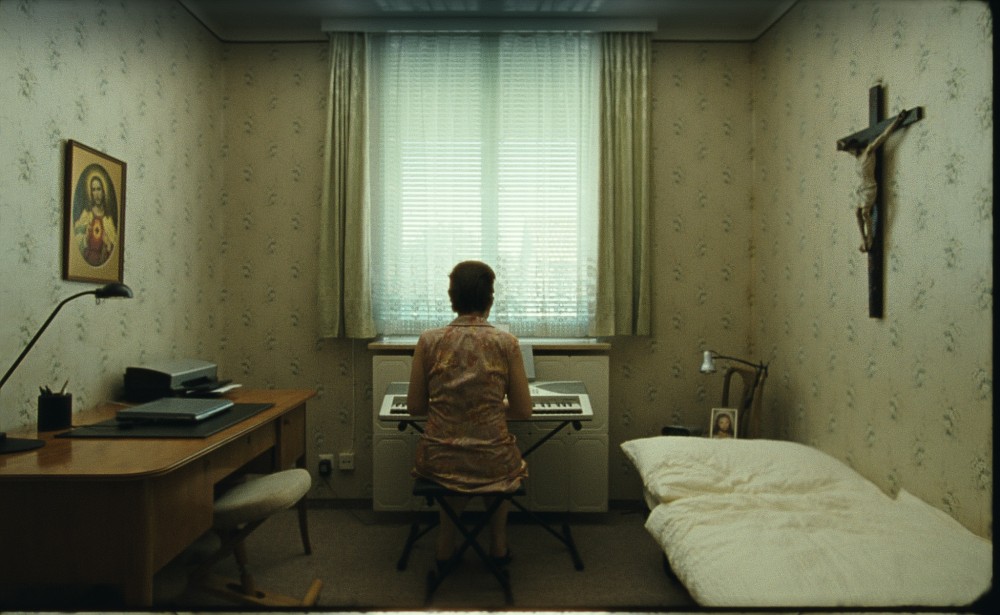 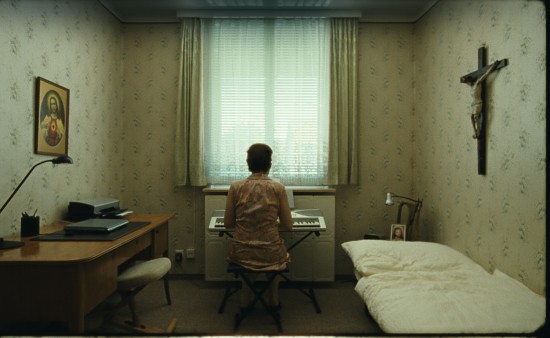 Austrian auteur Ulrich Seidl returns to Austria for the second part of the Paradise trilogy, Paradise: Faith.  In Paradise: Love we met voluptuous, blonde divorcée, Teresa. Here, the mood is more sombre as we meet her less attractive sister, hospital worker Anna Maria (Maria Hoffstatter), who is taking her holiday ‘at home’ in her gloomy apartment block. 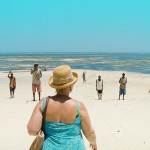 This time the focus is on religion and Seidl’s stark and stylised interiors mirror Anna Maria’s empty unhappiness with her life.  Hoffstatter gives a committed performance as an unlikeable and fastidious woman who clings to routine, old-fashioned clothes and a Wagneresque hairdo. As the narrative unfolds, she also emerges as the worst kind of religious bigot.

Ritual is a strong motif in this segment. Ostensibily a devout Catholic, Anna Maria’s days are spent observing meticulous routine: singing hymns and self-flagellating in front of a picture of Jesus. In neighbourhood forays as a door to door ‘Christian’ salesman, she comes across as insensitive and overbearing; projecting herself onto her victims, and  coming to blows with a disenchanted Russian immigré (Natalya Baranova) and forcing a kindly but arthritic man (Rene Rupnik) to pray on his knees in a droll vignette that considerably lightens the tone injecting some much-needed dark humour. 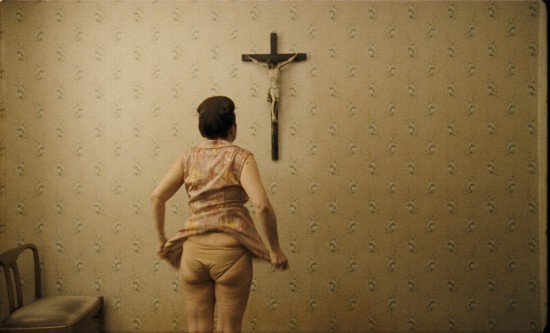 The appearance of her crippled Muslim husband Nabil (Saleh), blows her cover and sheds a new light on her piety.  A healthy physical relationship was obviously the focus of their marriage.  His paralysis has exposed their incompatibility as a couple and caused Maria to ‘re-discover’ her faith, sublimating her sexual frustration into hero worship of Jesus.  Saleh is quietly powerful as a reasonable man who rapidly morphs into a radical, raving mysogynist once rejected sexually. Anna Maria is actively disgusted by him and his religious beliefs and this only goes to heighten her own fervour, making his Islamic views appear strident and as they tussle with religious paraphernalia in the flat, the situation goes from bad to worse.

Occasionally spiked by provocative humour, Paradise: Faith is an uncomfortable film to watch, both from a dour visual perspective and a religious and moral viewpoint.  There are echoes of Kieslowski and Haneke’s deep misanthropy piqued with wicked comedy. An observational style leaves us space to contemplate the deep and fertile complexity of the issues involved and draw our own conclusions in our own time.

As in the other Paradise segments (Love, Faith and Hope), there is a strong atmosphere of subversion at play and Anna Maria’s unhappiness with her marriage and sexual frustration have found a focus on the image of Jesus, as Melanie’s burgeoning sexuality reaches out to the strong male figure of the doctor in Paradise: Hope. As Anna Maria kisses and masturbates with a miniature statue of Jesus, she idolises his physical ‘beauty’ in a deeply disturbing episode that has shades of Vanessa Redgrave’s performance in The Devils (1971) but cleverly steers clear of titillation. 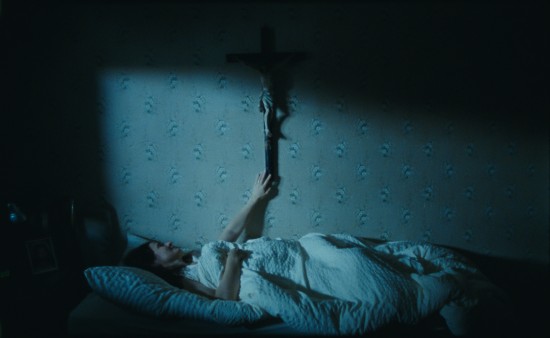 Like it or not, Ulrich Seidl’s non-judgemental viewpoint tweaks a raw nerve in his depiction of inescapable and inevitable truths that is always tempered with a lightness of touch and knowing humour. A well-pitched and timely comment on the multicultural debate, it also showing how the disenfranchised and disenchanted can subvert their feeling into religious fanaticism, using religious fundamentalism of any persuasion as a badge of honour to hide more covert psychological issues. Paradise: Faith is possibly the most harrowing of the trilogy but also the most apposite in terms of contemporary multiculturalism. Highly recommended. MT

THE PARADISE TRILOGY LOVE, FAITH AND HOPE ARE SCREENING AT THE RIO CINEMA DALSTON ON 16TH JUNE 2013.  PARADISE: FAITH IS THEN ON GENERAL RELEASE FROM 5TH JULY AT THE CURZON RENOIR.