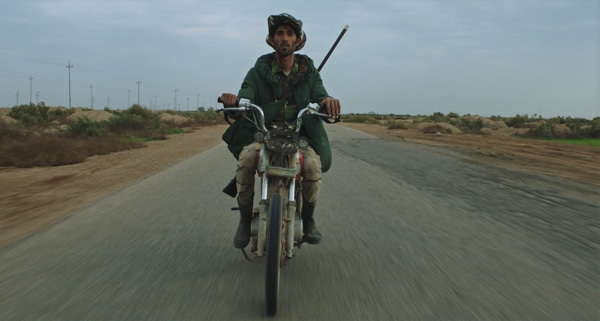 Notturno is cinematic but too enigmatic in its broad brush impressionist study of everyday life in the war-torn Middle East.

Endowed with his signature poetic gaze but lacking a formal narrative that made Fire at Sea so compelling, Notturno is essentially a collection of filmic episodes that drift from one to the next exploring the corrosive effects of the ongoing conflict on ordinary people. Wartime is clearly the theme behind these vignettes but without any point of contact we are left imagining, guessing and wondering rather than gaining worthwhile insight into the hapless lives, makes Notturno a largely dissociative and unsatisfying experience although some may enjoy its more freewheeling approach. And his camerawork is stunning.

The war serves as a latent but corrosive and destabilising presence for the local Libyans, Iraqis, Kurdistanis and Syrians who try desperately to keep their world together when all around them combat rages on. No finger is pointed at the perpetrators although ISIS is mentioned several times when a veiled and tearful mother takes a call from her frightened daughter.

The film opens to the rhythmic marching of soldiers in a training base, in the distance the thud of bombs and ammunition is heard as distant flames flare up in the night sky – whether they are explosions, or oil refineries is uncertain. A troupe of camouflaged female fighters let their hair down and relax drinking tea after their day is done. Five children settle down for the night on the floor of their main room where their mother will then wake the eldest at the crack of dawn to go hunting with an older man who pays him to spot flying prey. Another hunter drifts peacefully around his boat amid rushes and ducks oblivious to the danger, he carries a gun but the only gunshot is heard in the far distance. Each of these studies is revisited in finer detail.

The most disturbing segment explores the naive drawings made by children in nursery school. These feature black-masked men, torture and beheadings rather than innocent depictions of their parents, pets or playtime. A psychologist listens to their thoughts and recollections about being roused by ISIS to be tortured and witness the death of adult prisoners. The images are often sublime in contrast to the sorrowful subject matter.MT