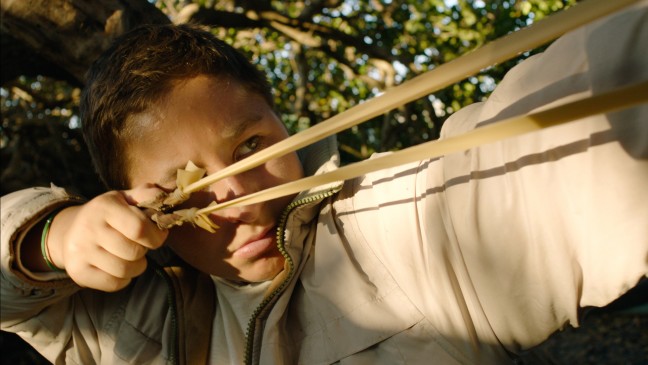 Samuele is twelve and grew up on the island of Lampedusa with his family of fishermen, all struggling to survive. But fish are not the only thing in the sea, miles from mainland Italy. For years, his home has been the destination of thousands of people trying to make the crossing from Africa to a better life in Europe. They have paid expensive fares to traffickers but their journey often ends in death. The Italians rescue them and respect their dignity. Gianfranco Rosi’s sober exploration of this human crisis is a tribute to the kindness of strangers who say “we are all in the same boat”.

Rosi’s starkly rendered and absorbing documentary paints a vital and non-judgemental portrait of the situation where both immigrants and islanders are given ample weight. But pictures can tell a thousand words and that’s the way Rosi leaves it: we must draw our own impressions and conclusions of the humanitarian tragedy.

Samuele’s family are decent but poor. Eking out a meagre existence through diminishing returns, they prey to God and drink out of plastic cups at dinnertime, but somehow they are content with their simpe life and its ingrained traditions. His grandmother remembers the hardship during the Second World War when their livelihood was once again threatened by ships that came by with guns rather than immigrants, but they survived.

Amusing himself with a handmade sling Samuele spends his days messing around on the shoreline with pals and gaining his sea legs for when he becomes a fisherman himself. Those who reach the island are often mothers with kids and babies on the way. They have suffered war zones and hardshipin Sudan, Eritrea and Syria. Many have died in the overstuffed, leaky boats and appear like tragic creatures, bedragled from the heart of darkness or a holocaust; their gold plastic insulation blankets giving them an otherworldly appearance of stranded meteors with coal black skin. Patiently the Italian coastguards take them on rescue boats and doctors examine them, expertly offering free medical care.

FUOCOAMMARE is a calm and sobering film that often makes tough and gruelling viewing but its images linger long afterwards: the rugged landscapes, azure coves and bleeding corpses speak for themselves. It’s a bittter pill to swallow, sweetened by Samuele’s chipper vulnerability as we watch him learning English and coping with his own difficulties: asthma and heart palpitations suggest the boy is internalising some sort of inner turmoil or grief. The title is name of the song his granny dedicates on the local radio station to her sailor son who is hoping for better weather so he can launch his rickety boat and earn his living. MT