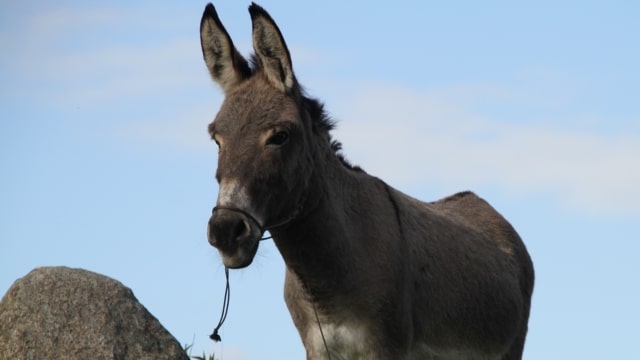 Another film that sees the world through the eyes of an animal concluding that most humans are no better than exploitative beasts.

Cow took a bovine perspective at Cannes last year, and Gunda was all about the pecking order of pigs. Polish master Skolimowski, who at 84 has been making films since the 1960s, recreates Robert Bresson’s arthouse original Au Hasard Baltazar with a strikingly fresh and intense piece of visual storytelling and minimal dialogue save the occasional braying that endears us to its bidable beast of burden, a humble donkey called Eo.

Eo is a self-determining character whose destiny is often driven forward by personal choice rather than human ownership, his wanderlust taking him on to pastures new. And the director makes use of the donkey’s diverse life stages to expound a richly thematic narrative that trots through concerns as diverse as animal welfare, football hooliganism, family conflict and the ongoing debate about sustainable farming and the food industry. It does so with impressive artistic flair, a dynamic blood red visual aesthetic, and the masterful camerawork of award-winning DoPs Michal Dymek and Pawel Edelman.

Starting out in a travelling circus Eo will enjoy a life of extremes from a gruelling time harnessed to a scrap metal truck; to the bucolic pleasures of chomping through daisy strewn fields and a cushy billet in an Italian palazzo owned by Isabelle Huppert’s elegant countess, but he never forgets his first experience of human kindness from his circus trainer Kasandra (Sandra Dryzmalska) and suffers bouts of separation anxiety throughout these times of joy and pain. The final scenes will break even the hardest heart. This donkey’s doleful, disarming demeanour and stoical endurance make him worthy of the Best Actor award in this year’s Cannes. In reality the film went on to share the Jury Prize and Best Composer for Pawel Mykietyn’s commanding score. MT