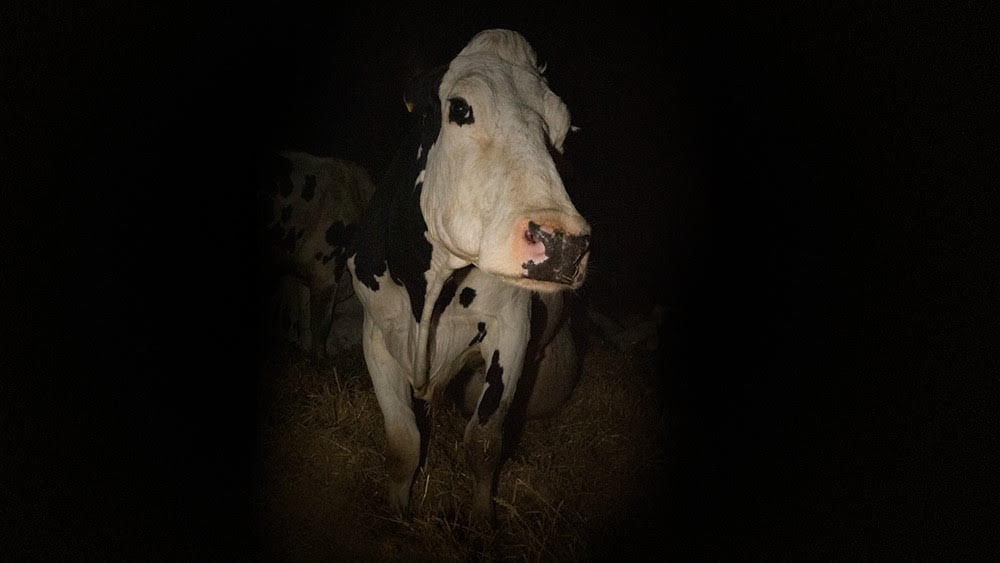 Andrea Arnold returns to her native Kent for a first documentary feature that follows the daily life of a best-loved farmyard animal, the Cow. An intrusive almost wordless look that starts with the birth of a female calf to Luma, a long-lashed beauty with a glossy black and white splodged coat. Hooves first, the baby emerges and all we see is an enquiring eye looking round at the world in amazement, Luma wiping a lustrous tongue round her fluffy ear. But mother and baby are soon parted, the calf is taken away to the plastic teat of the farmer’s bottle. Dairy cow Luma will then be milked mechanically for our own consumption til the end of her life.

Cow has echoes of the 2012 shocker Leviathan where Lucien Castaing Taylor and Vanessa Paravel took an intense arthouse gaze at commercial fishing through the eyes of the fish. Gunda took a similar wide-eyed approach: A human attempt to see things from the animals’ perspective, where the cow becomes our friend and the human a cruel, opportunistic and exploitative interloper. When the black bull arrives to do his business, Luma carries on unimpressed. The only moment of bliss in her life is grazing in the bucolic peace of the summery Kentish meadows, chewing buttercups and lush grass in the moonlight. Overhead a plane comes into landing its lights flashing like an alien spaceship in her natural world.

The mass production of milk is big business but Arnold doesn’t bore us with the facts or figures, or even talking heads. The only heads here are furry bovine ones, and muddy bottoms caressed by swishing tails. Bemused, bewildered and beguiling the cows look out in wonder at a world of exploitation. And when Luma’s calf disappears into a plastic pen with a plastic teat, Luma moos loudly in protest as the two are parted. And as each of her calves is born Luma comes become protective, or at least that’s what we hear from a disembodied human voice. Clearly cows have feelings too. But here she exists to produce milk – gallons of it – and that repetitive diurnal task it what seems to lead to her tragic demise in the film’s shockingly blunt finale. MT

Andrea Arnold’s first feature documentary COW in UK and Irish cinemas on 15 January, followed by its exclusive streaming debut on MUBI from 11 February 2022.