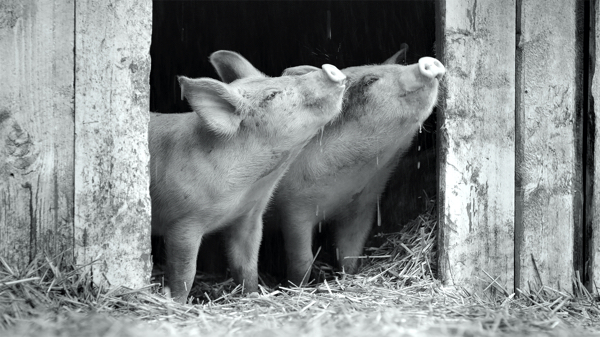 Gunda is the protagonist of this gentle black-and-white meditation on farm animals. She is one of several hundred million pigs that inhabit the planet, alongside a billion cattle and livestock. But Gunda is special

Victor Kassakovsky’s high-res camera films the world from their unique point of view in his zoo-centric follow-up to water-themed Aquarela that explored the physical and economic impact of the planet’s most important elements.
Here farm animals take centre stage right from the opening scene with Gunda’s piglets emerging in the moments after birth and suckling instinctively. This is a film that will possibly make you go vegan. The law of the fittest prevails as each newborn struggles for a teat, Gunda shuffling around to make room for her recent brood. It’s a noisy, messy business. And not all survive. The mother crushes the runt to death before it has a chance to take its first meal. As the piglets grow they are constantly shoved around and groomed by their mother amid squeaking, barking and grunting. Scuffles break out as their diet becomes more focused on scavenging in the fields nearby their pen.
Three separate strands make up this farmyard film that is on no hurry to tell its everyday story of animal life and death. A world of instinctual behaviour, of hierarchical self-regulation,  and intense awareness of the environment. The chicken segment is particularly fascinating as it plays out like a thriller. The one-legged cock has a reptilian regard for his habit, his head swivelling round constantly as beady eyes check out every single detail as it stumbles forward in the undergrowth. Cows are given a more graceful treatment, their soulful eyes staring back at the camera, these mammals have a sedate elegance despite their hulking size.
A buzzing soundscape intensifies their constant need to rid themselves of flies.In a summer downpour, the new brood of pigs enjoy torrential rain, sucking up the falling droplets from the cover of their barn. And when the heat grows too intense Gunda sinks into a mud bath. Her piglets are almost fully grown but make a terrible racket as they compete for a share of her dwindling milk supply, the camera tracking them at ground level. Despite the post prandial exhaustion Gunda never takes her eye off the brood, watching them like a human mother. And she is right to do so because soon this rural idyll is interrupted by the arrival of man and machinery and the screen is filled with rubber tyres and metal. The piglets’ squealing announced their sudden departure and Gunda is left bereft, bewildered and alone, with a breast still full of milk and motherly instincts. Kossakovsky makes the destruction of her family unit feel every bit as real as a human one as his camera tracks her febrile attempts to find her piglets.
In their 2012 documentary Leviathan Lucien Castaing-Taylor and Verena Paravel looked at the North Atlantic commercial fishing industry from a piscean POV adding a twist of horror to their study. Kossakovsky adopts a less sinister approach but Gunda is still an unsettling piece of filmmaking which certainly pleads a case for veganism. His indignation about the ignorance of humans in general and the degradation of these creatures permeates this conceptually minimalist, but visually brilliant meditation. And makes us think twice about our arrogant dominance of the animal kingdom. MT
ON RELEASE FROM 4 June 2021 | GLASGOW FILM FESTIVAL |BERLINALE 2020 PREMIERE |
Copyright © 2022 Filmuforia