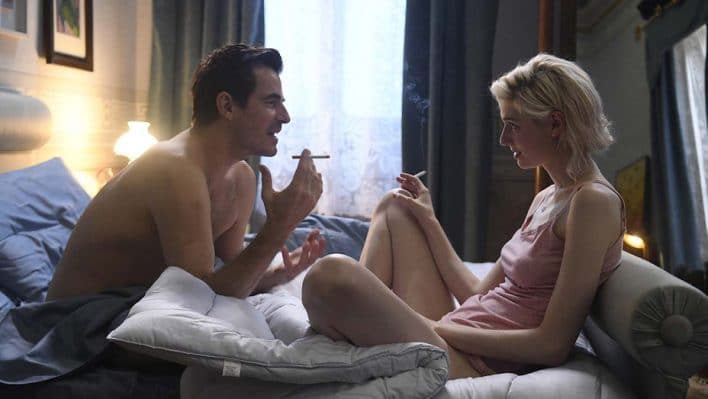 Claes Bang and Elizabeth Debicki and Donald Sutherland are the stars of this slick English-language debut from Italian director Giuseppe Capotondi (Suburra). It revolves around an art theft that starts well but ends rather badly. Despite this rather unwhelming finale, The Burnt Orange Heresy is saved by its lush locations, dignified piano score and enjoyable performances – even Mick Jaggar is fascinating to watch.

Bang is glib chain-smoking art critic James Figueras who has found a way of boosting his dwindling income by giving talks to rich American punters – and he’s doing a great job of impressing his “art authenticity” audience in the opening scenes by pretending the picture hanging before them is a rare masterpiece, later revealing he actually painted it himself (‘beware the power of the critic’). He  ends up in bed with one called Berenice Hollis (Debicki), and after some text-book love-making and tricksy pillow talk whisks her off to Lake Como to do bit of business. This is where Mick Jagger enters the fray, in cameo – as craggy art collector Cassidy letting himself down by mispronouncing “Modigliani”- not once but twice. Bang doesn’t correct him because he is desperate for the money and the reptilian Jagger character is paying well to undertake a thorny mission: to steal a painting of an enigmatic artist and a crafty old devil: Jerome Debney (Donald Sutherland), who lives on his estate. Debney has a habit of setting fire to his work making anything he produces in his final years very much in demand, and therefore valuable. Figueras must gain access to Debney’s locked atelier in order the secure his prize.

Based on a 1971 novel from American writer Charles Willeford, Scott B Smith draws the narrative deftly with some unexpected twists although the tonal shift from jaunty romantic drama to darker sweatier territory reveals the sinister state of affairs for Bang’s desperate character – beware the self-seeking showman with the imploding career.

Meanwhile Debicki is a shrewd cookie and starts to question the motives behind her lover’s charismatic allure, a move that sees Bang morphing into his Dracula persona with disastrous consequences, as an unscrupulous opportunist who will stop at nothing to achieve his goal, in the easiest way possible until it all spirals out of control. MT