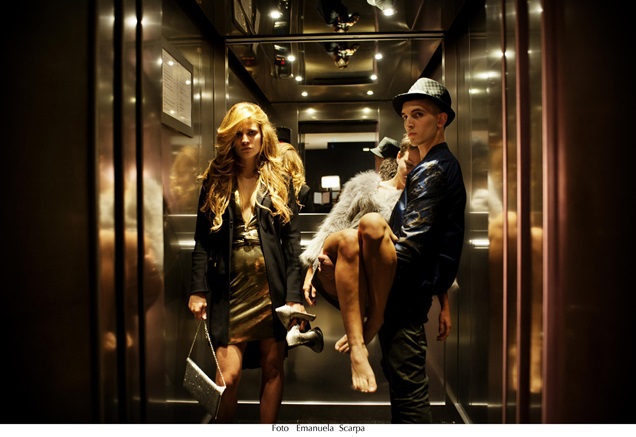 After his standout first feature film ACAB – All Cops are Bastards, director Stefano Sollima directed two hugely successful crime series for TV, Romanzo Criminale and Gomorra (both were remade as features), before returning to the cinema with SUBURRA, an apocalyptic, anarchic and violent operatic saga of greed and decadence.Based on the novel by journalist Carlo Bonino and crime writer Giancarlo De Cataldo, the film takes its name from a district in ancient Rome, known as a Red-Light area, but nevertheless is the birth place of no lesser than Julius Caesar. This connection, linking Upper Class crime executed by professional criminals, links the action in SUBURRA.

In early November 2011, Rome two momentous events: torrential rainfall and the abdication of Pope Benedict XV. Sollima shows the week leading up to what he calls an apocalypse (an end of the world scenario) which leaves Rome in danger of being submerged in the floods. Filippo Malgradi (Favino) is an MP in the Lower House of the Italian Parliament and a well-known fixer with good connections to the underworld. After trying to sponsor a bill allowing the costal region of Ostia to be transformed into an Italian Las Vegas, with huge kickbacks for lawmakers and property developers, he spends the evening with two prostitutes, one under-aged. One girl dies of an overdose, and Malgradi leaves the other woman, Viola (Scarano), to get rid of the corpse. This way Malgradi sets in motion a violent circle of revenge killings, whilst he tries to get the Planning Bill through parliament.

A small-time pimp, Sebastiano (Germano), falls into the hands of the vicious Gypsy gang leader Manfredi Anacleti (Dionisi), after his father, a one-time powerful gang boss, commits suicide, leaving huge debts with Anacleti, who takes his anger out on Sebastino, taking away his villa and car. Meanwhile, Numero 8 (Borghi), Viola’s on-off boyfriend, a loose cannon, murders the man who helped Viola to dump the corpse of the girl in the sea. Unfortunately for Numero 8, his victim is Anacleti’s son Spadino.

Anacleti senior is unable to control his family; his sons are playing football in the living room, and the he goes into overdrive: he tries to kill Numero 8 and Viola, whilst kidnapping Malgradi’s son. All this chaos is anathema to the Samurai (Amendola), an ex-right wing terrorist, now in charge of the property deal in Ostia. Whilst he literally cleans up the loose ends, he underestimates Viola. And as the rain engulfs Rome, Malgradi, Anacleti and The Samurai get a very different, but deserved punishment.

DOP Paolo Carnera’s images of near eternal night and torrential rain together with an equally overpowering, electronic soundtrack by the French duo M83, make SUBURRA an emotional overpowering tour-de-force. It’s a contemporary Dante’s Inferno; a cesspit of soulless characters who are so regressed, they are almost antediluvian. Their bungling and lust for violence is astonishing, as is their capacity for self-glorification and deceit. Whilst the narrative is hardly original, it just about enough for this opera of wild decadence and engrossing sadism. SUBURRA is a B-picture with the aesthetics of Visconti’s La Caduta degli Dei. AS