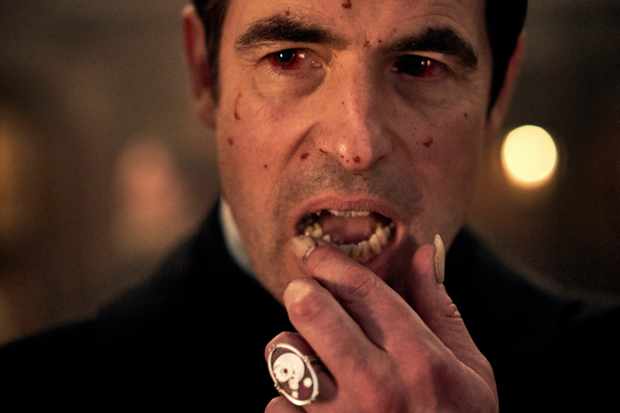 The BBC rejuvenates the Dracula story with this bracingly biting blood-splattered three parter that references all the usual iconography: crucifixes, coffins and cloaks – but adds multiracial underpinnings and fluidly sexual characters that include a strong female lead in Sister Agatha van Hellsing. The story wanders peripatetically through a Romanian castle, a nocturnal sea voyage aboard a ancient schooner and the nightscapes of contenporary London.

Writers Mark Gatiss and Steven Moffat create a modern masterpiece that feels fresh, complex and surprisingly witty, sending up the vampire legend led by the dazzlingly daunting and dishy Danish actor Claes Bang who terrorises the living cast with a performance that blends condescending camp with arch horror. The cunning count doesn’t seem to mind whether his victims are male or female as long as they invite him to sink his vicious gnashers into their fresh supply of warm blood and tap their credentials into the bargain.

Dolly Wells is simply magnificent as the faithless Hungarian nun who in the opening scenes interviews the (by now) undead and decrepit Jonathan Harker about his experiences with the Count while in thrall to his dubious hospitality. The action cuts back to Transylvania 1897 where Dracula was  planning a move to Victorian London from the turreted terror of his creepy castle where he had perfected his English at every bite of his unsuspecting guest. The dark dungeons light up their sparklingly glib repartee: “You’re a monster”, screams Harker, the count retorts: “And you’re a lawyer, nobody’s perfect”. The following episode takes place on board the HMS Demeter bound for England and introducing fresh blood in the shape of a Romanian crew, a professor from Calcutta, a German Arch Duchess (whom he ravages, having perfected his German on another  deckhand titbit), and a lavender married couple, the husband falling prey to Dracula’s masterful charms. Needless to say, the Count “ absorbs” all their cultural attributes feeding off their jugulars with glib satisfaction only to wash up 123 years later on a Whitby beach in the present day where a tousled haired special branch Agatha meets him with all guns blaring from her Police vehicle.

Once in 2020 the narrative suffers a couple of blips with a collection of millennial characters that don’t pass master with what’s gone before. A Savile Row besuited Prince of Darkness minus his gothic backdrop struggles to retain his chilly persona, but Bang’s towering physique and his suave and sardonic allure restores our belief in his predatory nature, tempered with a cheeky line when he is momentarily confined to a Perspex prison cell: “I’m a vampire: why have you given me a toilet? Writer Gatiss finally gets his on scene moment of glory as Dracula’s dapper and deferential lawyer, a role he also created. The character of Lucy is less inspiring as a modern day source of sustenance for the Count, in the guise of a smug, selfie-seeking psychopath whose millennial magnetism and dusky draw is proved to be only skin deep, after she survives the grotesque cremation scene (most audiences will be crossing this off as an option in their own funeral arrangements). And Zoe (as Agatha’s great great niece) makes for a convincing modern day cancer victim, wasting away before our eyes, her wan charms creating soulful chemistry with the Count as she poisons him with her diseased blood in an inspired plot-twist. She throws down the gauntlet to her doomed lover, taunting him with the steely words: “You seek to conquer death but you cannot until you face it without fear”. So he capitulates by actually facing up to the challenge, walking into the brilliant sunlight his features flooded with its golden rays.  The final scene is both surprising and ultimately satisfying, serving both Agatha’s latent fantasies and Dracula’s atavistic longings. It’s a triumph that creates new hope for the legend while maintaining his gothic allure. MT