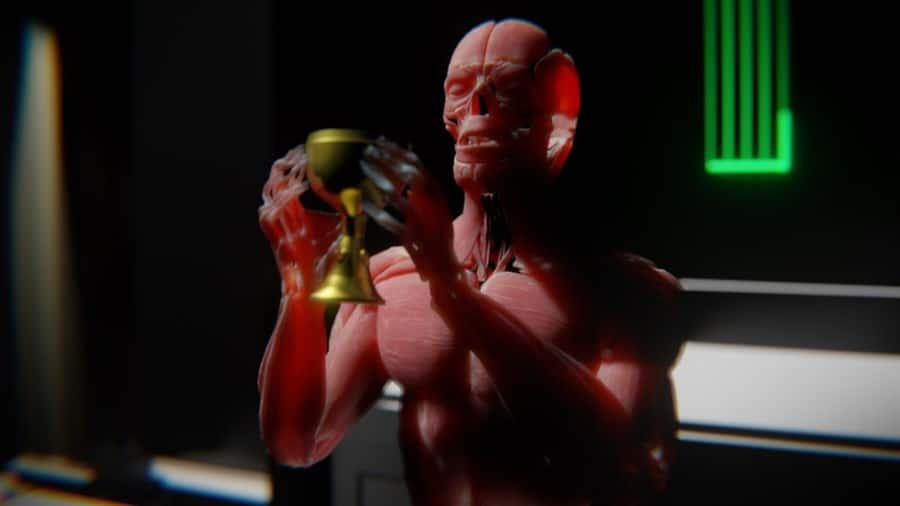 After analysing sleep paralysis in his Shining spin-off Room 237, director Rodney Ascher has taken on a much grander project: convincing us that everything on this planet is the work of super-advanced computers who have built this super Matrix, perhaps for the enjoyment of equally advanced creatures to watch us earthlings toil on in his never-ending soap opera – a little bit like The Truman Show on an universal level.

To this avail he has summoned four eye-witnesses who have come to believe that humankind is at the mercy of programmers, and who write the narratives we call ‘life’. These ‘believers’ of a world in the permanent process of simulation are suitably dressed, face and torso transformed into video-game avatars, in front of a webcam. A fifth witness, Joshua Cooke could not be present since he is serving a prison sentence until at least 2043 for killing his parents – a result of his obsessions with the Matrix series. But at least he can warn others with this bizarre life story.

The simulation theory is not that new: Plato and Descartes are among many other creative souls who believed in the theory of sleeping humans whose whole lives are just computer-assisted dreams. Here a vast network of AI forms the background of all our life stories, including the vast army of non-player characters. It all feels like a secret message from some liberated creatures – Jehovah’s witnesses or other religious cults who have studied the vast conspiracy so you can eventually join them. But like all religions it’s a question of belief. Nick Bostrum, a Swedish academic, sounds most anchored in some form of reality: “We are not in, what ‘believers’ call, a ‘base reality’ but “in one of countless simulations, its inhabitants have been programmed”.

Much time is given to SciFi writer Philip K. Dick (1928-1982), author of Blade Runner fame , who had written 44 novels (the majority being adapted for feature films) and 17 short story collections. He visited his disciples in Metz, France in 1977 and gave a talk about the counterfeit worlds in his novels.

This how he describes his obsession with these worlds: “My fictional work is actually true, particularly the novels The Man in the High Castle, and Flow my Tears, The Policeman said. Both novels are based on fragmentary, residual memories of such a horrid slave state world.”

Dick also claims to have remembered past lives, and a very different present life; confessing these mystical experiences occurred after dental surgery in 1974. He goes on: “We are living in a computer-programmed reality, and we only realise this when some variable is changed, and some alteration in our reality occurs. Those alterations are felling like a deja vue. An alternative world branched off”.

All complex stuff, but fascinating if it appeals to you. There is much more: Elon Musk and the Mandela theory among others, but we will have to wait until we find out who is in charge of this giant conspiracy. Until then we’ll have to make do with our status “ALIVE BUT NOT LIVING”. AS