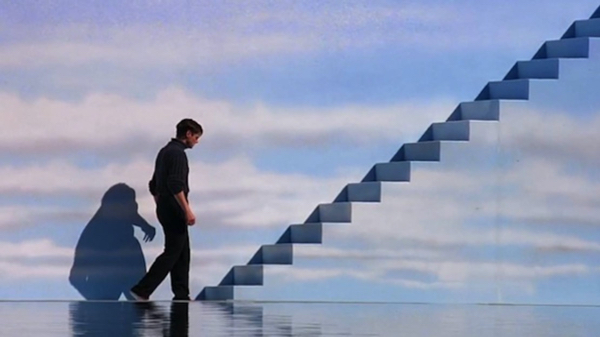 A pioneer of arthouse cinema in his native Australia Peter Weir (*1944) has made fourteen features in a career spanning 44 years. The Cars that Ate Paris (1974) was followed by string of cult classics: Gallipoli (1981), Picnic Rock on Hanging (1975) Dead Poet’s Society (1981) and Witness (1985) to name a few. The Truman Show is an underrated gem, a stinging satire of meticulous execution. Written by Andrew Niccol (who directed Gattica), who clearly had in mind the ‘Twilight Zone”, Weir in the end insisted on a more upbeat approach for this amusing state of the nation allegory which is increasingly relevant today.

Thirty-year-old insurance salesman Truman Burbank (Carrey) lives a toy town existence in smalltime Florida with his preternaturally chipper wife Meryl (Linney). Everything appears to be perfect but Truman somehow feels incomplete in this saccharine existence and we soon discover why. He is actually taking part in a global reality TV show which has been running world-wide for with more than 10, 000 eps, kicking off with Truman’s live birth on TV.

Life becomes even more disjointed when when his drowned father, appears to resurface. Or is it his father? A radio car message, not meant for him but for ‘actors’ in his vicinity, makes Truman even more suspicious and then completely bewildered when the beam from a Klieg light narrowly misses him from somewhere up in the sky. College girl friend Sylvia (McElhone) has to be written out of the show when she tries to spill the beans, finding her way to Seahaven, to warn Truman before being dragged away by her ‘father’, claiming his daughter is schizophrenic and will be taken to the Fiji Islands.

One feeling persists for Truman in this anodyne nightmare. The love he felt for an enigmatic woman, and his efforts to reach her provide the film’s dramatic thrust and the underlying truth behind life’s charade. Meanwhile Cristof (Harris) the director and creator of the TV show, would rather drown him than release his money-making hero into the real world. Credits must go to PD Dennis Gassner for creating a Stepford Wives-like environment, and DoP Peter Biziou for executing the different forms of reality in all its fine detail.

In an interview in 1999 Weir told me he and his fellow Australian filmmakers, amongst them Bruce Beresford and Gillian Armstrong, really benefitted from the imported culture from the USA and Europe. “Culturally, we had a diet similar to Americans of our generation. Australians had no culture. We were simple people until recent times. We were Europeans in the bottom end of the world. As with a new colony, the Arts are the last thing to be developed. I think, my generation was the first to not withdraw, but go to London, as did the generation before us. But we stayed there. We were determined to make our mark, like the kid who has been the shortest at school and been bullied.”

Understatement is very much the watchword of Weir’s features, even those as placative as The Truman Show. Later on in his career with Witness and The year of Living Dangerously, he brought a delicate voyeurism to sex scenes, unlike many 1970 features, which showed too much naked skin. His response to why he chose this approach was revealing: “When the Hays Code operated between 1930 and 1966, directors were far more inventive in the way they showed love and lust. With the Hays Code gone, I tried to use the lessons I learnt; that less is more. You allow the viewers to join in making the film and apply their imagination. They are joining in and completing the movie with me”. AS